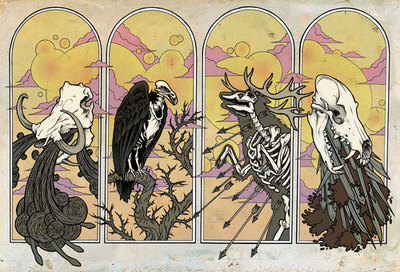 I understand that in America there are groups of people who dedicate much of their lives to making ready for a forthcoming Apocalypse, nuclear or otherwise. I believe they are called âSurvivalistsâ. From what little I have seen of such people they are portrayed as paranoid inbred swamp dwellers, dressed in fatigues. Whether this portrayal is accurate or not, I know not.

To the Dark Age and Medieval mind, and indeed well into the âEarly Modernâ period,[1] the Apocalypse was a looming concern for two reasons. First, simple religious fervour and literalism. But second, because âKing Deathâ was always near at hand. War, pestilence, plague and famine were all constantly present. Society could break up at any time. Any minor illness or child birth was potentially fatal. Any serious injury or illness almost inevitably so. In the absence of anything more than the most rudimentary medicine or science, life was a game of chance in which âKing Deathâ held all the aces.

It is rather trite to point out that as science has advanced, faith and fear of imminent arrival of the afterlife or the Last of Days has rather waned and âweâ tend to think of ourselves as all powerful and secure from disaster and disease. But as the recent cold weather has illustrated, we may not be quite so far from a spot of disaster as some may assume. A few weeks of winter weather has seen the roads in the United Kingdom reduced to a shambles at times, fears for supplies of food, and major disruption to water supplies, not least in Northern Ireland where thousands have been without water for weeks and one major hospital came within hours of declaring a major emergency. And it was not the only time an Act of God caused a rumpus last year. In Iceland, a volcano did what volcanoes are supposed to do; it burped. A relatively small deposit of ash brought air travel across Europe to a close, and I remember very well, for example, reports that imports of vegetables which we have become accustomed to consuming all the year round were in danger of drying up.

Sometimes, whilst driving on the motorway at night, I have wondered at the incredible complexity of the modern world as I observe the logistics going on. Lorries bringing supplies from the ports to the distribution hubs. More lorries taking food from the hubs to the supermarkets. Tankers taking fuel for the lorries to the depots. Lorries shipping goods from Scotland to London and back. Freight trains running. An impossibly endless and complex dance.

The sheer scale of the modern economy brings great benefits but like some incomprehensibly complex machine, the interdependence of each of myriad of component parts means that a tiny spanner in the wrong place could bring the whole to a grinding halt. And while the internet is a great boon, so much of our lives are now dependent on the hidden transfer of information in electronic form. For this reason both simple technical breakdown and cyber terrorism are real and serious threats. To take an example, what would happen if banks and bank machines were disabled for a week? How would people buy food or fuel? How would they behave?

Leaving aside Act of God, Act of Terrorist and just accident, it seems pretty clear that there is going to be a fair degree of disruption by strikes in the face of government cuts. A summer, or more likely autumn and winter of discontent looms.

I am not an advocate of âSurvivalismâ, and I am not suggesting building nuclear bunkers in the back garden. It just seems to me that a degree of prudent preparation would be no bad thing. To back this up, I have a relative who is a senior officer in one of the emergency services. One of his jobs has been âemergency planning.â Suffice to say because of the information he has seen he keeps a reasonable supply of bottled water and tinned food in his garage. I think he refreshes the water every few weeks.

I think I shall lay in something of the same. I shall also dust off my old camping gear and make sure I have a camping stove with bottled gas, candles and matches, torches and a transistor radio with batteries. Nothing over the top, just prudent.

Gordon Brown once claimed he had abolished boom and bust. It was a stupid, arrogant statement, because the history of the human condition is constant. As a Son of the Manse one would expect him to have known better. Does not the Bible contain a parable of Pharaohâs dream of the seven fat cows and seven thin cows?[2] It is there for a reason, and one which can quite properly be interpreted in entirely non âreligiousâ and practical grounds. Because, in modern parlance, âstuffâ happens. It always has, and it always will. It pays to be a little ahead of the game. Sooner, or later, âstuffâ will happen again.

As the effects of the fuel protests a few years ago began to bite, people
round our way started panic buying in the local supermarkets. The three
products to be sold out first were bread, baked beans and toilet rolls. Ever
since, Iâve been trying to work out what that says about the British
characterâ¦.

I had a timely reminder of this when a electricity cut reminded me that my
gas central heating still depended on an electric pump and thermostat to be of
any use at all. Have picked out a nice corner to get a multifuel stove put in,
already tend to eat seasonally (due to a wonderful local farm shop âthese
carrots picked 3 miles awayâ) and keep a moderate store of cans and dried
beans etc. Need to look at better lighting and indoor cooking options though.
The firepit and smoker will do fine if itâs ok to cook outside though.

â¦â¦try to generate neighbourliness. Find out who has useful skills. Military
or just basic cooking. Having food is good but if you have no firepower to
protect your gardens then itâs pointless.

Weâre pretty much stuffed in this country, then! The New World will be
ruled by police, farmers and urban gangstersâ¦.

Iâd say it was prudent to keep enough cash in the house for when the banks
crash â it has happened already. Lloyds TSB internet and ATM machines crashed
in 2008.
Iâd keep lots of dried foods and tins â the shops around here were
empty during the recent cold snap. Bread was grabbed out of the shelf fillers
hands as they tried to re stock the shelves.
Get a woodburning stove â Iâve
been collecting wood for a few years now and will be ok but when the gas /
elect becomes too expensive or is switched off then people will die. The
windmills are ineffective in winter and will offer no help.
Try and swap
any cash in the bank for gold and silver coins. Physical coins not JP Morgan
fake funny money paper coins.
Buy lots of candles and bottled gas. Itâs
cheap at the moment but will be too expensive in about 2 years time when panic
sets in.
Panic must set in because we have too much debt and have no way to
pay it off. Approaching Â£1trillion and rising. Sterling and dollars etc will
become worthless as there will be nothing to back it up.
The US debt is 10
to the power of 40. Mind boggling and thereâs no escape
So buy silver
coins, collect logs, get a woodburner, store dried foods, dig a well , try to
generate neighbour

the other thing that will be interesting to watch will be the increasing ,
er, hysteria as we approach 2012 (Mayan calendar thing) â all sorts of
assorted nonsense will be on view!

The thing is, all this âend of the worldâ stuff comes from a mistranslation
in the King James Bible, or so I understand is the case.

I understand that in the UK there are groups of people who dedicate much of
their lives to making ready for a forthcoming Apocalypse of AGW. I believe
they are called âWarmistsâ. From what little I have seen of such people they
are portrayed as paranoid inbred Westminster swamp dwellers, dressed in suits
& frocks.

Cancel Direct Debits and Standing Orders, keep a bare minimum in the bank
to cover a few basics and use cash. Keep it split in several places and use
wisely. But local produce, grow your own. Filter all water, Store oil and
paraffin, keep some Hurricane/Tilley/Vapalux lamps on stand by as well as
primus stoves. Have a wash tub. Use solid fuel with the ability to burn wood
(and politicians) Much more besides â check out The Larder of Last
Resort:
http://theantiterrorist.co.uk/?p=121

Iâve lived âoff the gridâ for a period of twelve years. No Tele, pre
computer days, and the sense of total freedom it gives is indescribable.
Today, most are addicted to technology like our great Grandparents would never
have understood. The change for many would be next to impossible. They will
not survive. It needs to be done and experienced to iron out the creases, and
fine tune to basic needs. Insulation and food conservation will be vital, and
storage without power if need be.

Gildas â welcome to my world !

A number of us in the UK have been watching events of the last five years
or so with increasing alarm. The list of potential âincidentsâ that have the
potential for major disruption is very long â and some are inter-related. As
you mention, an internet/IT disruption could have a ripple within many
different sectors of the economy to take one example.

Recent events show that our infrastructure is at the limit, and our
organisational capabilities seem, erm, lacking. And we no longer have the
luxury of a large spare military capacity to step in to help.

Being prepared for multiple weeks of disruption would appear to be prudent.
My list ofâBlack Swansâ?

All in all â keeping a few cans of baked beans ans some bottled water handy
might be a good plan!

Iâm rather worried about the effect that these baked beans will have on
the atmosphere. Are there any more friendly alternatives?

The in and groovy phrase is now âgoing off gridâ

Hard to look up all the answers on Google, thoughâ¦

Itâs good that Anna now has nearly all her old team back together,
especially you, holy brother.
Those of us who live in the depths of the
countryside already do all this (except Rogâs poxy carrots) but you left the
generator and a supply of fuel off the list. Losing a freshly butchered lamb
from the freezers is not something we want to do too often.

Wise words indeed! I was thinking of freezers but hadnât come up with a
solution!

ââ¦ the interdependence of each of myriad of component parts means that a
tiny spanner in the wrong place could bring the whole to a grinding
halt.â

Not sure that a few weeks without imported beans from Venezuela counts as
âcoming to a grinding haltâ. God forbid people eat seasonal stuff (or frozen
stuff) for a week or twoâ¦

Iâve been instinctively hoarding Guinness for weeks now which will be a lot
more use than your can of poxy diced carrots.

âI think he refreshes the water every cople of weeksâ. Mans clearly a
whimp! When Anson sailed round the world , he made do with casks with weed
growing in the water, and it didnât do him any harm. He didnât loose more than
half his crew, from memory.