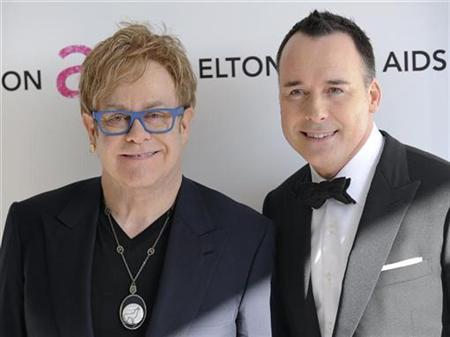 Elton John and his partner have become the proud parents of a son born to a surrogate in California on Christmas Day.

The boy, named Zachary Jackson Levon Furnish-John, is the first for the rock star and Canadian filmmaker David Furnish, who have been together since the early 1990s.

“We are overwhelmed with happiness and joy at this very special moment, Zachary is healthy and doing really well, and we are very proud and happy parents.”

The magazine said the boy weighed 7 pounds, 15 ounces, and it quoted a representative for the 63-year-old musician as saying that no further details about the surrogacy arrangement would be disclosed.

The pair, who entered into a civil union in 2005, tried to adopt an AIDS-infected orphan in Ukraine last year, but were thwarted by government regulations.

Poor Levon. His Mother’s a Pawn and his Fathers’……..

Some Kids have all the luck.

I agree, it’s pants. We could disgusset all night, but it’s late already so
I’m nippling this in the bud, now. GG’night!

Her cousin is called Corin Plaster, I believe, and both are
grandchildren of Ian Growento-Nayle and Fallon Arches.

Despite the disimilar names, all are descendants of the ancient
Remedies clan.

Really? I thought the family records stopped with the
O’dour/E’Aters arranged marriage. Just shows how wrong one can be.

Madame O’dour married Henry of Boulleschit in 1789 and produced a
son who became a famous athlete – Henry Foot.

Ah! Yes, of course! I must have confused a twig of the O’dour
family with a branch of the Pretty family. I remember now, it was
the third Pretty, Polly, who ‘bolted’ in the early 30s and came
back married to Ol’ Pop Sox and the rest is hosiery.

She never seamed to get her story straight, and it was a
lisle before anyone could take her seriously; Ol’ Pop was
permanently on suspenders but the marriage rolled on.

Yup! They had real staying power in those days, even in a
pinch, and weren’t as straight-laced as is popularly
thought. Mind you, I’ve heard they were basquette-cases,
some of them. Bravissimo, I say.

I think that what these guys do to and with each other is irrelevant. Who
cares? But at 63, the chances that the kid will lose one or both parents
increases from year to year. Ten years from now, the chances that little Zach
is then an orphan are pretty good. Which is a shame.

lenko,
It is as irrelevant as any married couples sex life is to their
child – what is interesting is that if you are rich and gay – then people
are prepared to overlook your little foibles and see you adopt a child that
no other couple with a similar background would be allowed to take
home…..

The perks and privileges of ‘celebrity culture’…

I go along with Richard. Good luck to all concerned. I know people who had
a much worse start.

Look, gays are really not a problem. Unless your god says they are, in
which case she’ll take care of it herself.

By the time this kid grows up, it won’t be that odd. When I was young,
people fretted about kids born out of wedlock, or to mixed races, or with
divorced parents; and how they’d be picked on for being odd. The problem
dissipated. The future is nearly here.

I also share Richard B’s reservations about this; a child needs a mother
and a father – not 2 of the same gender; it’s common sense, innit? This is
symptomatic of these confused times. However, the pragmatist in me would also
agree that the child has more advantages than some – and may grow up to be
well-balanced. Let’s hope so. I daren’t contemplate what the Abbess Hilda
would say if she knew about it..

I have my dinosaur reservations about this (I still believe that ideally
children should have two parents of differing genders), but I’d say let ‘em
be. There are worse circumstances to be born into. Two rich, intelligent
homosexuals who clearly want you in their lives, or born to a single mum after
a careless, drunken shag with someone whose name she can’t remember, and a
life on benefits? I’d say the positives outweight the negatives here.

Never mind he’s homosexual – how about he’s mentally screwed up with drug
and eating problems in the past, a shopoholic who thinks he can buy anything
and everything, a serial philanderer – crikey, I think the fact that he is
homosexual is about the last of this kids problems……the fact that he’s rich
only allows him to indulge his every whim – you really think he/they will be
able to pass on a balanced outlook on life?
Interesting though that most
peole think that the potential problem is that he’s homosexual, not that
he’s terminally unbalanced……

Maybe the two things are not unrelated?

“…you really think he/they will be able to pass on a balanced
outlook on life?”

No more so than Richard’s putative single mother on benefits. In fact,
I think the chances are about equal!

Thongs just aren’t the same these days. No Pockets in ‘em.