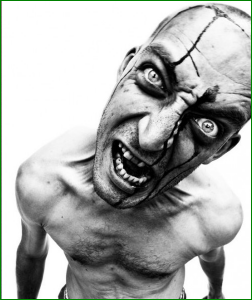 For Armageddon is just around the corner. Sorry to be so dramatic, for I did intend to write something cheerful on the first post after Christmas.

By my reckoning, January 12th should be our final day on this earth – it is not global warming that we should be concerned with, nor even global cooking to perfection, but global incineration, charred beyond recognition.

In the few days before Christmas, the US saw changes in the make-up of its armed forces that have serious consequences for the rest of us.

Don’t be daft! I’m not talking about the ‘Don’t ask, Don’t tell’ legislation that was overturned in the Senate. That might affect some of the ‘make-up’ that the armed forces use, but a few high stepping, bottom clenching sailors calling the Rear Admiral ‘Sweetie-Pie’ isn’t going to signal the end of the world as we know it – we are surely more grown up than that? Besides, if some of them swap make-up hints with their new bessie fwends in the Taliban, that cannot be a bad thing.

No, this is far more serious, and it snuck past us as everyone was busy swapping homophobic jokes in the comments…..

That politically correct bastion and policeman of the world has decreed that – by law – 40% of the crew of its armada of nuclear armed vessels shall be comprised of those suffering a mental disorder.

Don’t get me wrong, I’m not about to start campaigning against those suffering from a mental disturbance. I have no truck with those who wish to stigmatise and isolate the mentally ill. But, but, but. There are some jobs, Prime Minister of Great Britain, for instance, and others with their finger on the nuclear button, that are best filled by someone, anyone, other than those filled with murderous rage, suicidal thoughts, or homicidal hallucinations.

However, from the 1st January, 40% of the crew of those sleek and secretive nuclear submarines roaming our seas that we are assured are our best protection against the ‘madmen’ in North Korea and Iran, who, we are told, are ‘not to be trusted with nuclear weapons’, will themselves, be comprised of those who may be, at any one time, suffering from one or all of DSM-III-R’s list of side effects of category 292.0.

This is political correctness carried too far.

From the 1st January, the crews on board the US nuclear arsenal are forbidden to smoke whilst submerged. Personally, the bath is the one place I never smoke, the end gets all soggy, but that is by the by. These boys (and girls) are submerged for 60 days at a time.

They are forbidden to use an E-Cigarette – too likely that the cartridge will be replaced by one filled with crack cocaine apparently. They must fall back on the tender embrace of the pharmaceutical replacement – now proven to cause hallucinations, a belief that God is talking to you, suicidal thoughts that have led to almost 5,000 serious psychotic episodes and over a 100 suicides – or alternatively, they can go ‘cold turkey’ and suffer from the side effects of 292.0 which include – temper tantrums, feelings of despondency, mental confusion, vagueness, anxiety and depression.

Doesn’t that fill you with glee? Now off you go and eat, drink, smoke and be merry, for I calculate that by Jan 12th one or more of them will have snapped and blasted us all into outer space…

Seems reasonable to me – the article said how smoke can’t be cleaned out of
the air circulated round subs effectively.

However, I seem to recall that (modern) Japanese submariners were supposed
to have much higher levels of tooth decay than the general population –
because they spent much of their time on patrol eating sweets. So the USN lot
will probably substitute other habits for smoking on board soon.

Perhaps there will be, within a few weeks a catastrophy with a U.S. nuclear
submarine that makes the sinking of the Kursk look like a minor incident on
the kiddies boat lake at a holiday camp somewhere near Gt. Yarmouth. That
would see some sense being drummed into the P.C. brigade in Washington,
especially if their east coast ended up more radioactive then
Chernobyl…….However being a born again cynic, I think it is too much to ask
for; no not the deaths of millions of innocent people, merely that such an
incident could drum any sort of sense into the minds of the politically
correct.

I’m sure they are simply following the old adage of “set a thief to catch a
thief” Anna.
A shame for the rest of us but it’s our duty to make
‘reasonable adjustments’ for the disadvantaged and we only had a couple of
years until the Mayan calendar ends anyhow.
And don’t those nicotine
patches cause the most absolutely amazing realistic dreams, as good as any
illegal narcotic, and you can claim some free under the forthcoming NHS scheme
so enjoy.
Happy new year!

Dave H…. Just bring your documents to me and I’ll do your return in a flash
of nuclear explosion, just before they nuke Basingstoke. And at extremely
reasonable rates!

This has been an advert.

Best get paid up front Lenko……

That’ll save me having to do my tax return then.

C’mon Anna. There are checks & balances in place. Don’t forget GB
survived GB (he of the famous Nokia Flinging tantrums) having his metaphorical
Finger-on-the-Button of our soon-to-be-sponsored-by-chewing-gum-manufacturer
Trident missile subs.

I bet on 12th Jan all the WalMart Greeters will still say “Have a Nice Day”
to all their customers.

Nothing escapes the gaze of Anna Raccoon! Well, it seems to me that if
these are likely to be the Last of Days then I shall spend them in solitude,
peace and meditating on…..Oh sod it. Where’s that bottle of three star
Metaxa……!
Merry Christmas all!
G