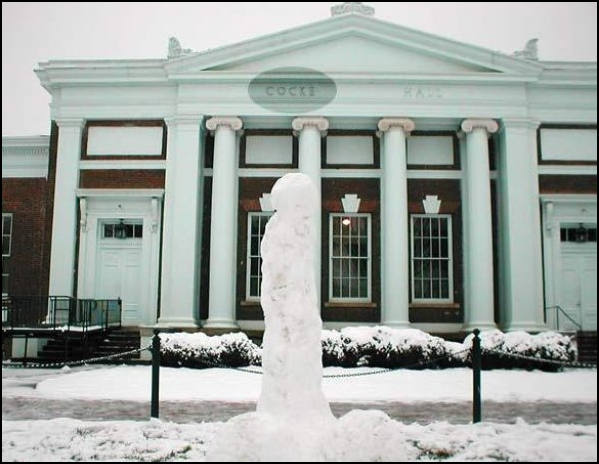 And other cold weather jokes…..

Blimey – we’ve even got snow in the Dordogne this morning! The Pompiers were out at the crack of dawn pulling motorists out of ditches, and my neighbour has smoke coming out of his chimney – a sure sign that the temperature has dropped below -12, hardy little soul that he is.

Peppy, the Fox’s Glacier Mint Polar Bear has been towed south to avoid the global warming in the Arctic. That Gordon Brown really started something when he said he was going to save the world from global warming in 50 days…

Incidentally, the original Peppy was shot and stuffed to order to enable Fox’s chief artist to create the iconic image of a Polar Bear for an advertising campaign back in 1922 – those were the politically incorrect days, eh?

According to Dr David Viner, a senior research scientist at the climatic research unit (CRU) of the University of East Anglia,within a few years winter snowfall will become “a very rare and exciting event”.

A Bus Driver in Illinois has been forced to resign after the ‘brutal murder of a snowman’ built in the Bus Lane of a university campus – and a Facebook page started to ‘Help the Bus Driver who killed the evil snowman get his job back’.

The city of North Pole in Alaska has been unable to find enough citizens who could successfully pass the ‘child sex offenders’ check to enable them to receive all the mail addressed to ‘Santa Claus at the North Pole’ so the US mail service is refusing to hand over letters containing the name and address of expectant children from all over the world (apparently Alaska is the Number 1 State in the ‘highest number of perverts per square inch’ stakes, and last year a prolific sex offender was discovered gleefully opening letters from children asking him to come down their chimney..…)

And William Hill has declared that ‘snow on the ground doesn’t constitute a White Christmas’…..apparently a White Christmas is when snow falls on Christmas Day even if it is only one little snowflake, so don’t count your winnings yet.

Anybody else got any S’No Jokes? We need cheering up today as the country falls apart round us!

A snow penis may be cold, but at least it stays up throughout the
night.

There’s nothing like ‘faisant le pompier’ when there’s a giant snow penis
around..