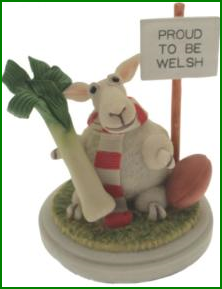 A couple of decades ago, I sat in a barren government office, facing a trio of civil servants sitting on a high dais in approved âintimidate the intervieweeâ fashion. They asked me a series of inconsequential questions, hobbies, sporting interests, that kind of thing.  One of them glanced down at my application paper and noted my address â âClun, where is thatâ?

âBore daâ I replied with the faintest hint of a raised sardonic eyebrow. (Good Morning for the uninitiated!) I had not thought that the question was any more pertinent than his previous queries.

Several days later I received a letter telling me that owing to my âWelsh language skillsâ, and âin light of recent legislationâ, I had been appointed to cover Wales in its entiretyâ¦..

I amused myself in those early days of the Welsh Language Act by learning how to say âCan I speak to xâ in Welsh, for if you telephoned the Administration Offices in Cardiff, they would answer the telephone in flawless Welsh, but should you reply in Welsh, there would be stunned silence followed by âtransferring you to a Welsh speakerâ in flawless English. The bilingual ability of the Rhonda Cynon Taf telephone operators was as limited as my own.

No one cottoned on to the new opportunities presented by the WLA faster than the criminal fraternity. Not for nothing is it known as the larcenous brain. Were you to be discovered leaving the Cardiff premises of Mssrs. Argos at 4am carrying three plasma screen televisions, you could amuse yourself by reciting âMary had a little lambâ in Welsh in response to any questioning, thus ensuring that somewhere in North Wales, a Welsh speaking policeman was being ordered out of his warm bed and instructed to drive hundreds of miles south in order to read you your rights in your âMother tongueâ and subsequently interview you â only to discover that âMary had a little lambâ was the sum total of your bilingual ability. A small revenge for having been caught âat itâ.

I was reminded of these capers of the early days in the fight to have Welsh become the official language of Wales once more â as it did on the 7th December 2010 â by an article I stumbled upon last night. Beautifully written by a journalism student, Emma McFarnon, apparently well researched, and liberally illustrated, it extolled the dramatic increase in Welsh speakers in Cardiff. It started on a confident note:

âHistorically, Cardiff was not a Welsh-speaking cityâ.

Er, Emma, I would refer you to:

âWelsh was the majority language in Cardiff from the 13th century until the cityâs explosive growth in the Victorian eraâ.

Geraint Jenkins is something of an expert in these mattersâ¦..

The most curious omission in Emmaâs blog post is the lack of discussion regarding motive for the 50% increase in Welsh speakers in sunny Cardiff.  I would posit that it is more closely tied to the implementation of the lex and the increase in public sector jobs in that city.

As the criminal fraternity adapt to new possibilities provided by a change in law, so do the unemployed; if you need, as indeed you do, to demonstrate that you have at least a modicum of knowledge of the Welsh language in order to make the transition from unemployed steel worker to Cultural Diversity Officer in order to âstrategise, structure and maintain a multi-ethnic workforceâ in Cardiff, then knowing your Cenhinen from your Defaid is an essential attribute, even if you canât claim to be bilingual.

I would suggest that this has more to do with the increase in apparent Welsh speakers in Cardiff than âa growing pride and confidenceâ in the language.

*Dons het tun and retires out of harms way*.

Clun â beautiful place, in one of Britainâs hidden gems, the Marches. Not
much Welsh spoken there, except possibly by some of the sheep â they do tend
to move across the border quite a lot, depending on who bids at the marts.

There are many strange languages in this land, but few are officially
recognised. There seems to be no allowance by the powers of government for the
existence of Workshop Esperanto. (Perhaps thatâs just as wellâ¦)

It must all be their own fault for losing the war against England in about
1411.

I was amused by this having just tramped in from the snowy wastes of
Somerset, last week I renewed my passport in Newport, I now appear to have a
predominantly âWelshâ passport.

Who said blowing up water pipes to Birmingham does not pay !