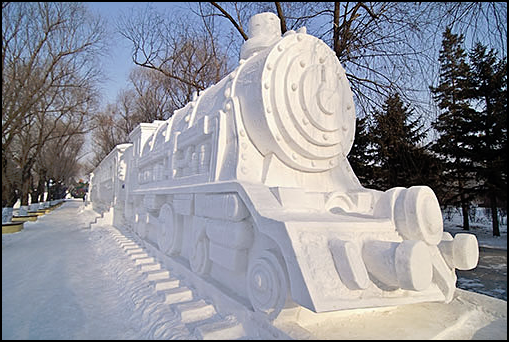 Ever since Gordon Brown promised to end Global Warning, the British have dripped and shivered their way through a succession of floods, snow blizzards, and freezing temperatures. Perhaps they had grown accustomed to the idea that temperatures would rise inexorably â they seem surprised to find that Gordon was lying again.

In Siberia, they know the snow will arrive and they prepare accordingly â planes still land at airports with -45Â° temperatures. Even in the balmy Dordogne we have three snow ploughs on permanent standby and a fleet of gritting trucks, just in case. In the South of France, the Pyrenees â you know that place you go to lie on the roasting racks in the summer to get brown â they still believe that it might snow in the winter. People buy snow chains for their cars, for fear they might get stuck â and by law in some places. They carry shovels in the winter; they dress appropriately, in case they get caught out. The auto routes have under surface heating which is switched on to allow the road trains which grind up and down through France interminably to keep moving. We have wood burners and a supply of wood, just in case anything happens to the oil supplies; most of us own generators, just in case the electricity fails and our freezer defrosts.

In Britain â six inches of snow creates havoc. The gritters canât get out â snow bound, the roads are clogged with abandoned cars, people spend the night on freezing trains â and the Transport Secretary orders a review of âgritting abilityâ â after the snow has fallen!

A spokesman for the Local Government Association says:

âMost people in this country wouldnât be willing to pay more council tax or see money diverted from other services to spend more on gritting.â

Really? I imagine they would be a damned sight more prepared to pay for efficient gritting than they are to pay for ballet lessons for one legged Somalian pirates â and you donât have any trouble stumping up the cash for similar schemes.

Grid-locked Britain is the laughing stock of Europe today. Perhaps part of the trouble is that the Met Office is now relocated to Exeter â virtually the only town in Britain which has yet to see snow. Which probably explains why, on their web site, they are asking:

If you have seen snow recently, please let us know by using the link below.
Snow in your area?

Go on, you know you want to â let them know whatâs going onâ¦â¦

According to some, this big freeze is due to Global Warming. So what can we
hope for the next time we get a hot Summer?

Oh, I forgot. Weâve just had a Hot Summer. We are doooomed, doooomed I tell
ya.

or even the Climate Change nonsenseâ¦â¦

And to morph to the Climat CHnage nonsense â this just goes to show that
the alternative to global warming (viz. Global Cooling) â is a LOT worseâ¦.

Your wordcraft is a delight to behold!!!

Yes, but you are the only one who got it, she morosely replied â¦â¦

I got it, but I only just read it, innit.

Hey !  Our reticence should not be taken as meaning didnât
appreciate the wit.

Iâm sure I noticed it on a subliminal level.

I am puzzled that the airport does not have a heated bit of tar to plonk
the planes on.( Romans figured that one out)

The Romans put their planes on warm tarmac? I never learnt that, and I
was once a classicist. Thanks

Does MBA mean âMy Brain Achesâ?
It would be relatively easy to keep the
railways running â they only need ploughs and frost-proof points-actuators,
both standard kit in sensible countries. This is one area of infrastructure
that should be centrally mandated â unfortunately thatâs a bit
anti-Libertarian, but it just will not improve if left to individual
councils.
Iâm stuck at home in Kent with blocked roads and no trains (the
Orpington line, natch), so have lots of time to launch invective at these
incompetents.

The problem with the railways is the fact they are using electricity to
power the engines. Get anything that is a slight insulator between the rail
line and the sliding pickup and the electricity does not flow therefore
trains donât move.

The old steam locos didnât have that problem and, in the winter used to
carry sand boxes that allowed the driver to put sand on the track just in
front of the driving wheels if necessary.

On out rail line up the Pyrenees which is electrified, they have a diesel
powered snow plough to keep it open during the winter and a diesel powered
engine for use if necessary. The fact that both sit and do nothing for 10
months of the year (but are invaluable for the 2 months they are needed)
would mean they would have been sold off in the UK and you have the mess you
do.

If I was running a preserved railway, I think Iâd make sure I
âpreservedâ a snowplough or two to rent out in the winter, possibly with a
steam engine to push it, if it got really cold and the diesel started
waxing up.

1. if the global warming lobby were consistent they would be campaigning
just as hard for New York style under street heating as they do for
windmills.
it wasnt long ago they were predicting a new ice age and that
global warming would divert the gulf stream. apparently the warming effect of
the gulf stream is all that keeps us from experiencing snow like other places
on the same lattitude â germany, russia, northern US states.
but no, they
swing madly from âits getting hotter â give us more controlâ to âits getting
colder â give us more controlâ. any weather supports their claims.
2. i
heard somewhere it may actually be illegal to use snow chains in the uk. does
anyone know?
3. as an anarcho capitalist id say this could be better dealt
with by private transport. would a private road company surface their streets
with something that couldnât cope with temperature fluctuations? would a
supermarket leave a less popular aisle filthy just because not many people
bought organic dog food? no and neither would a private road company leave
everything that isnt considered a âmajor routeâ impassable.

It is not illegal to use snow chains in the UK, but they should be
removed if they show signs of damaging the tarmac. Similarly, studded tyres
are illegal if used on clear roads, they must be used in conjunction with
ice and snow. Chapter and verse is not so easy to find (though maybe Iâve
been looking in the wrong places) and I believe perhaps a âgreyâ area with
some officers. But snow chains and studded tyres per se are not illegal.

My wife loves knitting socks.
Do you know where she can find a
pattern for snowsocks. Iâve got a 4Ã4 and would love to have some nice
coloured wheels for the winter.

We should have expected snow. Itâs always cold when the global warming
alarmists are having their annual fear-fest fortnight. We need to abolish the
subsidies for windmills and solar panels, and to spend the money on gritters
and snowploughs.

If we abolished these ridiculous socilalist âgreenâ taxes, we would all
be much richer, much warmer and have a securer energy supply.

A recent report shows we are currently paying about Â£800
per year per person on green taxes!

What flippin planet do uneducated green morons like Huhne, Cameron et al.
live on? Most hard scientists, such as geologists, physicists and chemists,
know that human-caused global warming is negligible to non-existent.
Unfortunately we have a lot of soft scientists in charge of our climate
science faculties. These jokers are the all from the same gene pool:
politicised, Guardian readers, donât know how to perform rigorous
experimental procedures, are useless at computer programming and yet claim
their âcomputer modelsâ are proof of man made global warming.

Write to your MP, it is a trvesty and the MPs should realise the
widespread disbelief in this death-cult religion.

Our manic adherence to green issues makes us pooree, colder and
uncompetitive whilst other countries propser at our expense.

I wrote to my MP and got patronised for my trouble. The cheeky sod even
feminised my name in the reply. I complained to CCHQ, his constituency
supporters, and No 10.

This country has always been run on a just-in-time basis.

So this underground road heating, how many windmills does it take per
square meter to power it?

Anna, you forgot to mention the notices we get on the main roads down here
telling when it is obligatory to use snow chains. Otherwise an excellent
description of the preparations here in the Pyrenees.

Iâm glad you published the link to the Met Office because I now know that
when I measure the depth of snow I have to (1) hold the ruler vertically, (2)
make allowance for the distance from the end of the ruler to the zero mark and
(3) not push the ruler into the ground. Who knew?

The 26 year old MBA who wrote that was never taught that at school, so
assumes that no one else knows it either â he wouldnât comprehend figuring
it out for yourself!

One of our best friends was a Highways road engineer. It is not simple and
takes a high degree of provision and capability. Our governing bodies decided
they did not want to afford it because they needed to increase their expenses.
At present apparently no trains are running from Orpington, a key station on
the SE Trains network.

Firstly there is a small typo â in Siberia planes both take off and land
when the temperature is -55C not just -45.
Secondly, 99% of the problems
and the fuss are in the south-east where the journalists live. When I was
young I lived in the North-East and the local gritters went out when the snow
started falling, not when it stopped, so the main roads stayed clear.

âThe auto routes have under surface heatingâ â really? Is that common?

Canât find anything on Google, but then Iâm searching in Englishâ¦.

Yo, Bored at Work â they even have some in sunny England â THIS is the
company that does it in the UK.

Huh. Well I never. Thatâs pretty cool (or in this case, not).

She just joined the cavalry.  Marvellous image :  a
raccoon on horseback, better than the buggy-&-automobile race in
Rascal.

Iâve always wondered if we could sprinkle low-level nuclear waste
under new motorways. It gives off a bit of free heat. The ecowarriors
would prefer that to active heating, and it gets rid of the stuff.

Essex county council are forced to whine that their gritting is ineffective
because the snow fell at times they didnât predict, and this wasnât
âhelpfulâ.

I thank god they donât run the nationâs military defences, or this comment
would have a lot more umlauts in itâ¦