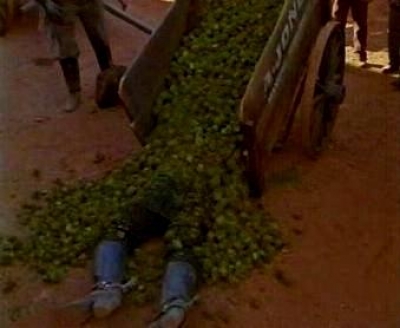 Not too far away from me is a branch of Tescos with a large mini roundabout in front of it.Â  I need to turn right at the roundabout to get into a small industrial estate. I now slow down to an absolute crawl negotiating this roundabout junction with headlights on full beam indicating right, because everytime Mr & Mrs Everidge exiting Tescos, indicate look at you full in the face and pull straight out creating a near miss.

3(d)Â  When exiting a branch of Tescos, remember the following rule-

6.Â  Check what direction the effing and blinding is coming from.

Little blue car appears, parks across my drive as usual, but this time on top of of the vile smell of aÂ  rapidly bubbling hole. Said woman, did not smell the smell, see the bubbling freezing deep yellow brown liquid or the hole.

“Itâll take her at least 1/2 hr of good scraping to see clearly out of her windscreen again.”

On several occasions people had to find alternative travel arrangements home and come back for their car the next day. Lo and behold, no one ever did it twice. These people wonât learn until you take it to them.