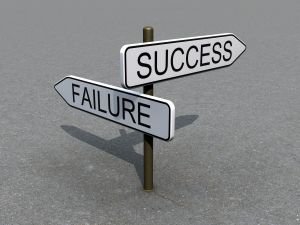 All around you people are striving to avoid failure. In all walks of life failure is seen as a bad thing. To be progressive you have to take the option of failure away from everyone. Therefore when no one fails everyone wins. The progressive thing to do is to ensure that all tests are set in such a way that no one actually fails the test. It’s also right and proper that everyone should be given the answer so that they don’t fail in trying to work out the answer for themselves. To stop people from failing committees are set up so that no one person can take the blame for the failure. Decisions are deferred higher up the chain to the point where the person making the decision can’t be fired, or deferred sideways to a consultant. In an ideal world the system is set up such that no one person can actually make a decision.

But this is all wrong. Failure is actually a good thing. You learn from your mistakes. The whole of humanity has been built on failure. Look at how a child learns to walk. They bang into things or fall on their bums. But every fall is a learning process as they learn from each grab for support about identifying distance.

Failure is useful as a research tool. Look at all the exceptionally beautiful bridges now being built. They are built because in the past other bridges failed. Many times. Each time engineers look at why the bridge failed and learn from it and understand how to make better and bigger and stronger bridges. Engineers thought they knew everything when they built the Tacoma Narrows bridge, but they hadn’t taken into account airflow. But now the tall Millau Bridge in southern France and the long Stone Cutter bridge in Hong Kong have been built and will stand for a long time [fx: x fingers].

Being allowed to fail is good. Take Lego. In days of yore you would buy Lego in buckets full of Lego bricks. Today you will find most (but thankfully not all) Lego comes in a kit where you have the pieces to make a specific thing, no more no less. You followed the instructions and built the object, but you couldn’t try different designs. Kids aren’t encouraged to use their creativity, instead the whole creative process is short circuited. It is still possible to use Lego in creative ways as the specialist kits can be combined but it’s an expensive way to go about it.

Whilst you shouldn’t actually strive for failure, you should be able to use your failures to learn from.

Finally a quote nicked from the web:

People who try to do something and fail are infinitely better than those who try to do nothing and succeed. Experiencing failure is inevitable on your journey to be successful. Each defeat is merely an installment to victory.

Failure is nothing but education, nothing but the first step to something better.  You can’t be a winner and be afraid to lose.

So go ahead, make a mishtake today, it’s good for you.

Lego was fun, but I learned so much more from Meccano. Okay, the Technical
Lego is cute and tricksy, but it’s not so elemental, or relevant to real
stuctures.

Sorry, Im being an anorak!

“So go ahead, make a mishtake today, it’s good for you.”

So, Gordon Brown must have been a [email protected] Genius.

He never learned from his mistakes.

Why? Because he never would (could?) admit to be wrong.

What happens when you attempt to fail, but then fail to fail? Are you a
sucess for completing the task? Or a failure for failing to fail?

Going for a lie down now…

Striving for failure is no good – I’d succeed every time.
More modern
bridges failing or are in need of serious repair than many built over 100yrs
ago.
Houses built post WWII are being demolished (as have city offices of
the sixties) whilst stone cottages 150yrs plus and 16thC Churches stand
firm.
Much that was built 200yrs ago still stands.
Much we have built in
the last 50yrs, does not.
We can only learn from our mistakes, if we
recognise and acknowledge them as mistakes.
To ‘try’ is to accept failure
as a likely result, and will ultimately be the most probable.
A plan must
be made; a goal set; and the task focussed upon and commited to. If the goal
is not met, re-set the goal and continue. Adjust the plan only if
necessary.

Lego – not quite the same.

The post WWII houses are failing because building practises started to
change. However rather than change bit by bit and learn from each step it
was encouraged to switch quite dramatically. Basically the building trade
was starting from scratch again and had to make new mistakes to learn how to
build using the new methods and materials. The trade has years to go before
they get to the stage it was at prior to the wars.

The Agency I worked for employed a new chief executive and hired
consultants who came up with the “no blame culture” to improve efficiency. It
transpired that this meant in practise that no blame was attached to senior
management so long as a scapegoat could be found far enough down the
management chain. Since that “learning experience”, as I positively spin it, I
follow the wisdom of Homer Simpson “It was like that when I came in.”

In my career I used to encourage people to commit to succeed, or, at least,
commit to ‘doing’. I got heartily fed up with people who would only commit to
‘try’, for to only ‘try’ is to commit to failure.

EG: You ask someone to do something by a certain date and they say, OK,
I’ll try. When the date arrives and the work is not done their excuse is
always, ‘I only said I’d try’. In their eyes, they haven’t failed the task
because they only committed to try. So I always encouraged people to COMMIT to
a course of action.

This simple philosophy was explained to me when someone asked me to ‘TRY’
and ‘pick up that ashtray’. Of course, it is impossible only to ‘try’. Because
picking up the ashtray is to fail in the trying, as is failing to pick it up.
In other words, to try is to fail.

It’s like bacon and eggs. The hen will try but the pig is committed.

On building castles in swamp – how persistence pays off
http://www.youtube.com/watch?v=g3YiPC91QUk
Enjoy!

I had Lego as a youngster.

All I ever built was single story, square houses with flat roofs. And then
I’d bomb them with my Airfix Harrier Jump Jet. It didn’t really do me a lot of
good in so far as structural engineering skills and creativity are
concerned.

It does, however, explain the western predilection for taking on third
world countries. Why, it’s second nature to us.

So reasuring! Speaking as someone still reeling from the fourth attempt to
complete this banking reconcilliation……
This waste paper basket full of
torn up pieces of paper is merely a marker on my route to success…..
I’m so
glad I stopped and read this.

An excellent and thoroughly encouraging piece. I think we are all justified
in our optimism that, with their record over the last 50+ years, our
politicians have now learned so much that we in the UK are poised on the brink
of massive success.

I still remember when I received my Meccano set. The first thing that I
built was something from the book of designs.

After that model I never, ever used the book. All my models were designed
by me. Some were good (most) some were acceptable, some did not work.

The result was that I became an Engineer and was successful in my
profession, designing many electro-mechanical machines. Many of which,
although I retired 10 years ago, are still in the catalogue and may be bought
from my old company.

We may fail, but this will prepare us for the future – if only we learn
from that failure.

There is a world of difference between “I have failed.” and “I am a
failure.” The everyone must win brigade fail to notice the difference. In fact
by focussing on fail/succecd they create problems. Dumbing down is a direct
reaction to fail/succeed thinking as is the 50% graduate target. The law of
uninteded consequences strikes again.

“Being allowed to fail is good. Take Lego. In days of yore you would
buy Lego in buckets full of Lego bricks. Today you will find most (but
thankfully not all) Lego comes in a kit where you have the pieces to make a
specific thing, no more no less.”

These are very wise words!