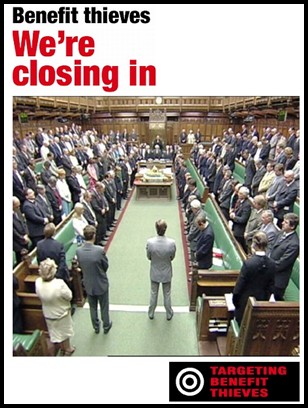 Like old lags skilfully picking the pocket of the prison officer about to release them from prison – our MPs just cannot resist the opportunity to have one last dip into the taxpayer’s wallet.

Commencing August 2012, any MP still claiming the current limit of £1,250 a month for mortgage interest costs – sufficient to finance £250,000 worth of housing – will have to repay the tax payer half of any profit they make when they sell the house.

They don’t like that idea – why give the tax payer any of that lovely profit?

So, they have dreamt up a new wheeze – don’t claim for mortgage interest cost!

Rent the house out to someone else. Let them pay the mortgage costs.

Where will they live now that they have rented out the home you paid for and refurbished at great expense dear Taxpayer?

The new rules allow them to claim £17,600 a year in ‘rental costs’ if they don’t have anywhere to live in the capital – which they don’t now – they just rented it out, remember?

So far, Labour MPs Chris Bryant, Clive Betts, and Conservative MPs Phillip Hollobone and Peter Luff have cottoned onto the new wheeze and ‘intentionally’ made themselves homeless and can claim the rental allowance and still pocket the rent from their old home – and the profit when they sell it.

They are utterly shameless.

Has anybody got the patience to draw up a list of which of the current MPs own houses paid for by the taxpayer so we can keep an eye on how many of them claim for rental of another property when the expenses are published next year?

You couldn’t make it up, could you?

I am thinking of leaving the Abbey and taking up a new religion.
Say…voodoo. How much wax is needed for about 635 dolls. How many pins do I
need!
(Lord, of course I am only joking…sort of)
Gildas

Oh who writes those stupid rules?

errrr…. the people who benefit from them?

The headline so well describes politicians :  benefit
thieves.  Not sure you even needed the word ‘benefit’.