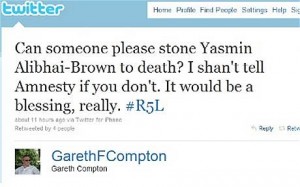 Nothing I said on the Nicky Campbell show was so outrageous that it should provoke such a response from a man who should know better. If I, as a citizen of this country, cannot even express an opinion about human rights and the moral authority of our politicians, what does that say about how equal we are?

Everything Yasmin Alibhai-Brown says is outrageous. She winds me up no end. I find it so exasperating to read her articles that I hardly get past the first paragraph before giving up and trying to calm down before I personally feel that I have to shove a big huge clue stick down her throat to shut her up.

I feel that as a citizen of this country I should be able to respond to a person in the public eye in the same manner in which she comments. I think that makes us equal.

Gareth Compton is not an idiot, he knew what he was saying. If I had said, “It would be a blessing if this man was stoned to death,” what would happen to me as a Muslim woman in this country?

Yasmin Alibhai-Brown is an idiot. She obviously knows that as a muslim woman if she said such things that she wouldn’t even get a quiet talking to because everyone is afraid of offending in the slightest manner any Muslim anywhere in the world at any time in the future. This is the elephant in the room.

We are in a post-Jeremy Clarkson universe where men think they can only be men if they insult people; there is a masculinity associated with this rough and anti-politically correct talk. What is so manly about going on Twitter and putting this out about a journalist who is trying to do her job and giving an honest opinion?

This is not just an insult, this is incitement in my eyes. He knows I’m a Muslim – he didn’t say “shot,” he said “stoned to death”. My daughter was distressed but she would not tell me why. “Why do you have to be a journalist?” she asked. “Every time you go to the door, mum, I think someone is going to shoot you.”

Your daughter is distressed because you haven’t taught her “That sticks and stones [pun intended] might break my bones by words will never hurt me”. If anyone has a public presence of any sort then they should know that they will get some odd and possibly extreme responses. It’s part of life.

If someone is in the public eye and gets bad publicity they either disappear from the public view or they change their public persona, sometimes with the help of Max Clifford. If someone is publishing articles which affect their private life then they should seriously think about changing their tune or stopping from publishing such outrageous articles.

Of course I do not think I’m going to be stoned when I go outside, but he validates those people who threaten columnists like me, and I cannot accept that. There are a lot of very violent people out there and they think they have the right to threaten me. This guy has made it OK.

Ah-ha, you’ve just admitted that you don’t think it a credible threat. Isn’t that admitting that it’s a joke? So you think that because someone has voiced their opinion that because some mad random nutter then uses it as the excuse to do something that the opinion voicer should be dragged over the coals? If that was the case anyone reading Guido’s blog who decided that it was right to abuse MPs and actually did it that you would get Guido locked up.

I am glad we live in a society where I am freer to speak than in any Muslim country I would be living in. I am grateful.

Except if someone disagrees with you.

I question the hypocrites though; there are people who say they believe in freedom of speech, but not for black people or Asian people or Muslim people, who turn into the Taliban when someone upsets their own views.

I question the hypocrites though; those that believe it they can make any outrageous comment to others, but who feel that if they receive the same kind of comment in return that the comment maker has gone beyond the pale.

In which universe does a Tory councillor think it is a joke that the Taliban go around stoning people for expressing themselves? I don’t think that is acceptable, and I’m very pleased the Tories have suspended him.

In which universe does a newspaper columnist think that they can make their opinions known and not expect to get some robust, negative, comments in return. Especially when their opinions are outrageous, narrow-minded and racist. I find Yasmin Alibhai-Brown’s opinions offensive and would be very pleased if the Independent got rid of her.

A couple of points to note.

Update: YAB has now decided to drop her charges against Gareth Compton.

Quick, lock me up – I made an unfunny joke!

You folks might be interested in this exchange between Yasmin and Sean
Gabb. Sean’s views are apparently so radical, the BBC had to fade him out:

Greta post, I read it before when you posted it alst week…soemwhere! Also
great news that YAB has “backed down”…probably due to the rising tide of
‘negative waves’ that was flowing towards her and the fact that a conviction
would have been kicked out and given her even more bad press.

I am sick to death of Political Correctness, no matter who it is applied
to.
Unfortunately it is more often applied to them than us.

I would love to know what were my chances if I took to the streets
screaming hatred about The Taliban.

Sorry, should have addressed that to Sadbutmadlad: I have only just noticed
that there are now additional contributors to the site. Sorry for overlooking
your byline, Mr SBML.

“Anna” can be used for Anna herself or her contributers.

On a point of order, it’s only in YAB’s fluffy world of self-importance
that she gets to “press charges” or otherwise. Presumably in addition to
thinking that she is the sole arbiter of law and justice she has also been
watching too many US-based legal dramas. If the case goes nowhere it will be
because the CPS sees that there is no possibility of a conviction. It’s their
decision, not hers.

Sorry, Submariner, but the CPS are likely to press on ahead with it if
it’s seen as ‘the ‘right’ thing to do’ despite the predicted lack of
success.

Just check out all the hopeless ‘rape’ cases that proceed to prosecution
because the CPS can’t be seen to deep-six them. This will fall into the same
category.

That they well might, Julia, but my point is that it’s up to the,
whatever their motivations – not up to YAB’s bountiful discretion or
belated realisation that she’s made a massive laughing stock of
herself.

“The chief censors in our society now are Muslims. They stepped into the
void left by our own.”

What void? Have you forgotten Mary Whitehouse? She didn’t give up, everyone
stopped caring about what she thought, precisely because she lost perspective
and jumped the shark just like Yazza.

There’s no shortage of bansturbators lurking, and they aren’t all Muslim,
not by a long chalk. Nor are they filling some need in society, either…

There’s no shortage of bansturbators lurking, and they aren’t all
Muslim, not by a long chalk. Nor are they filling some need in society,
either…

(That’s without irony, by the way. Nice one!)

I ‘m not sure that it should be the right of everyone to be able to offend
each other – I think we’d have been a far better nation had, say, the Punk
Movement been quelled, especially since it now leaves us in no position to
censor Gansta Rap.

The fact is that Muslim protesters can incite hatred against British troops
on British streets with utter impunity. That sort of ‘free speech’ shouldn’t
be allowed either.

My war generation relatives died offended and worried by the youth movement
and its antics – they told me often that in no way was this type of ‘freedom’
what they had fought for and nor was it how they would like me to behave.
“Where will it all lead ?” The ‘free speech’ angle is so often used by people
who are too cowardly to impose standards, “I don’t like it either – but what
kin ya dooooo ?”

The chief censors in our society now are Muslims. They stepped into the
void left by our own. If you don’t like it then you’re going to have to do a
little bit more than blog about it.

This is because, IMHO, of the break between ‘freedom’ and
‘responsibility’.

Can someone please stone SadButMadLad to death? I won’t tell Amnesty if you
won’t. It would be a blessing, really.

I have contacted the authorities. Expect a knock at the door in the early
hours.

Nice, but you didnt understand the bit about context, did you? Bless you,
you’re young. Here, I’ll help with an example:

“Can someone please type a smug reply to Yonmei, missing the point and
thereby boring him to death? I won’t tell his mum if you won’t. It would be
a blessing, really.”

I’m sorry, but you don’t really understand irony and satire, do you?
Are you sure you’re properly British, as this blog asserts that both are
essentially British values of humour?

Oh, a purity test, eh? Do tell us, Yonmei, who counts as ‘properly
British’…

Ah, yes, we have the “Proppa Brit” certificates just here! Stamped by
the Queen ‘erself! Cor Blimey guvnor. Only 10 quid ‘an all!Or twenty to
the pound, allowing for inflation – whaddya reckon?

This appears to have been an objection that has become popular since
the 10:10 snuff movie: it’s supporters patronisingly claim (whilst also
being completely ignorant of the actual makeup of their audience) that
the 10:10 snuff movie was actually “satirical” and/or “ironic” and that
anyone who didn’t “get it” was obviously not British.

Can we create a neologism out of this, in the same way a thread can
said to have been “Godwinned” once a certain comparison has been made,
perhaps this thread has now been “Ironed”?

Well I’m certainly confused. JuliaM seems to have replied to Yonmei,
but refers to my post? For the avoidance of doubt: I did understand the
‘bit about context’, I’m just not very funny. ‘Course, could be that my
irony-o-meter just needs recalibrating. That’s the problem with the
written, as opposed to spoken word (and yes, I know this also caused all
the Twitter shenanigans).

Hat, coat, taxi for one.

BaW – I’m pretty sure it was directed at Yonmei!