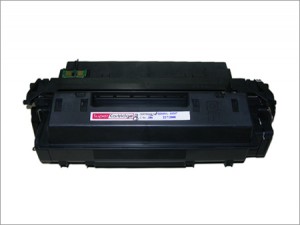 Firstly, how many people take a laser printer cartridge with them when they fly. Not just in their luggage, but in their hand luggage. 0.0001% of all passengers I guess picking a number out of the air.

Secondly, a laser cartridge is not a small thing. They’re about 550 x 350 x 260mm or about 21.5″x13.75″x10.25″. So if you take one you don’t have much room for anything else in your hand luggage and when airlines charge you for any luggage in the hold you’re not going to think that a printer cartridge is so important to take with you in hand luggage.

Thirdly, most laser cartridges are over 700g, especially “max print” style and colour ones. Cheaper ones are around the 300g mark. So we have this arbitrary limit as an attempt to try to say “look we are being sensible, we have scientists working out the size of bomb that will cause a plane to crash and we have set the limit accordingly”. Just like the limit for liquids being set a stupid low limit because anything larger “could contain enough explosive to cause a crash”, even though no amount of the “liquid” bomb could have been used in reality.

To try to ensure that we are scared about such amounts they ensure that security experts blow up 400g of PETN in huge explosions. What they don’t emphasis is that this is “under controlled conditions”. Also that the explosions do not use the same equipment as the terrorist used. Has no one told you that the experts who recreated the liquid bomb took over 30 attempts before they managed and they had an ideal setup and didn’t have to carry it or get a suspicious looking package past security. Sorry, scrap that last point. Security don’t look for suspicious packages anymore. They check their list of banned items and remove any item that might be so classified. So nail clippers are banned but pens aren’t – a pen thrust into someone’s neck can be fatal, a nail clipper can only cause a bit of bleeding. Security is no longer about intelligence but about following procedures.

The government have just shown that they are stupid and unthinking and always react retrospectively to terrorist threats by this stupid ban. Such a ban has nothing to do with actual security. It’s all to do with security theatre. The government is more scared of the public ripping them to shreds on the extreme off-chance that a printer cartridge actually lead to a bomb explosion on a plane than they are of terrorists themselves.

If the government thought properly about security they would rip up the current setup and start again from scratch. They would think about security even before the passenger got to the airport and they would do it in such a manner that caused minimal disruption to the passenger. The current method of imposing bans causes more disruption to passengers and a terrorist will have succeeded in their task – even if they fail. Security should start before a passenger arrives at the airport. If you start security after the check-in you end up with long queues at check-in – an ideal target for a suicide bomber. The security only needs to be light and right. That’s because 99.999% of people who fly are not terrorists. Security should be concentrated on those are stand out for what ever reason along with random checks to ensure that security is never the same so terrorists can’t learn and work around any checks. All that the current bans will do is make the terrorists choose another method, leading to the security services always playing catch up. Security should be done all the time everywhere in an airport with police looking at how passengers move around the concourse. Security should be able to question passengers even away from the metal detectors, but in ways that is not about “have you packed your case yourself” type questions but about “where are you going? are you looking forward to the sunshine?”.

I predict that if a terrorist attempts to use a sex doll to take explosives on a plane, that the government will ban sex dolls from being taken on a plane. As a sop to those who want to take sex dolls on holiday with them, they might state that sex dolls must be carried on in a deflated state in clear plastic bags and that it must have all three of its orifices examined.

H/t to dnotice for the the title

Ps nearly forgot when is the shoe ban comming in ,as these started to
ignite we saw in recent years what about shoes ! I think a major cartridge and
printer manufacturer is smiling all over their faces as compable retailers
have been dealt a major blow on their cheaper greener cheaper just as good
cartridges ,after all more cartridges than televisions are sold at more than
the price of most televisions ,well as you can imagine this is one of their
best world wide exports being battered by compatables from other countries
what a result ,ok there may have been a bomb in a toner cartridges so why were
not shoes banned there more to this ban and its business undertones , laptops
are not banned I am imformed you still can send a printer without a toner
cartridge how stupid is that !

its bonkers couriers say we can still send the printer but not with
cartridge inside you could not make this up its so funny where do they get
these people from but its good news for genuine cartridge sellers as this
affect all cartridges which are cheaper compatables as they can now rip us off
more easily ! truth is this is going to have a big effect on companies who
sell or rely on toner cartridges and supplies and this ban has been brought in
without thought and should not apply to genuine suppliers who the courier have
a account with for years what next ! perhaps they should ban planes from the
airport !

I’ve always said – the terrorists seem to have singularly little
imagination. Always putting bombs on things. Planes mainly, though the tube
did show some lateral thinking. If I wanted to cause maximum disruption to a
nation I can think of several ways it can be achieved with no explosives at
all.

My first trick would be to acquire a fleet of old transit vans and a large
quantity of small nails/tacks. Then in a coordinated way drive said vans up
and down the motorway system in the middle of the night chucking said tacks
out onto the carriageway. Result – more punctures than you could shake a stick
at, paralysis of the transport system until the motorways are cleared of tacks
(how?) and a shortage of spare tyres/inner tubes. Just in time deliveries
would be b*ggered, food wouldn’t reach the supermarkets, with a bit of luck
there’d be panic buying and more chaos.

Then at point of maximum chaos in transport system, hijack a full petrol
tanker and get some idiot desiring his 70 virgins to drive it into something.
Result – all fuel deliveries halted while new security is put in place.

Then move onto the rail system – trains are very susceptible to
derailments, especially at high speed. A simple ramp of heavy steel clamped to
a rail should suffice. Simultaneous attacks on all the main lines would have a
devastating effect, even if there was little damage, the network would be
closed down for days, even weeks while all lines were checked. But if done
correctly the lines would be closed for ages because of the
wreckage/damage.

Never hit the same target twice. Always be moving on to a new target while
the authorities try to beef up security on the last one.

In fact the ease with which it SHOULD be possible to terrorise the entire
nation leads one to suspect the ‘foiled terrorist attempts’
might not be
the work of terrorists at all, but our own govt, trying to keep us quiet and
subservient. Far easier to pass laws reducing our freedoms if we are all cowed
by the bogeyman of terrorism.

Buts thats just me being a old cynic I suppose.

It just shows how close modern society is to living on a knife edge. The
more complex and technological society becomes the closer it gets to being
tipped over into chaos. There is no resiliance to handling catastrophies or
situations which interfere with normal day to day life. Part of that is
because the current generation has no concept of working it out themselves –
they will wait till the end of time for the state to fix the problem. Part
of it is the reliance on the technology – watch what happens when there is a
power cut or your broadband hiccups.

The terrorists do have imagination – it’s the security services
pretending to be terrorists and their mates trying to flog reactive security
equipment that lack imagination..

This weekend l returned to the UK via P&O Ferries from Zeebrugge as a
foot passenger. You checked-in, given your boarding card and then proceeded to
the ship. Passport control was a quick glance at you and passport. ln my case
l was wearing a hat and sunglasses but still was allowed to proceed.

Passengers took their luggage with them. There is no security whatsover
regarding luggage. lt is not scanned and you are not questioned on it
regardless of size and amount. Many passengers had large black plastic bags
full of their tobacco purchases. The recommended amount being 3kg but judging
from size of bags l’d say the average was 10kg. Passengers also had their
travel cases with them of various sizes. Then there were the contractors with
their tools and equipment. Nothing is checked.

You could’ve brought a complate arsenal of weaponry and explosives onboard
the ship with no problem whatsoever. Any ‘terrorist’ could then do as they
wished … target the ship or wait for it to dock in the UK.

The procedure when we arrived in UK was similar to Zeebrugge although they
did take far longer witrh the passport check. That meant cross-referencing
your passport with the details about you on their screens. This only applies
to UK citizens though as other nationalities are not on their database.

Passenger capacity on the ship is 1250 and the service is every 24hrs but
don’t worry because everyone knows terrorists are braindead and only attack
aircraft.

Toner cartridges are not banned from the ship

There is also the numerous cars, vans and trucks on the crossing apart from
the foot passengers. Security? … hah!

thats nothing ! About 20 times a season The RORC & JOG racing fleets
, often 60 – 100 boats strong, bugger off to France / Holland / Spain . Have
never , ever, been even asked for a shufti at my passport !
PS.
Devastated that Anna disapeared without trace – Anna, if you happen to read
this, you are a complete sweetie !

Frankie Boyle said: “Flying is inconvenient if you’re white. If you’re
brown you’re just moments away from having to fly naked on a transparent
plane.”

I’m extremely angry and upset about this. I feel naked if I don’t have a
printer cartridge with me when I go on my travels, and the thought of going
without one fills me with revulsion and dread. Ah, well – I’ll just have to
boycott the airlines, I suppose. Must go – Caedmon’s been cooking kippers..!
Yum!