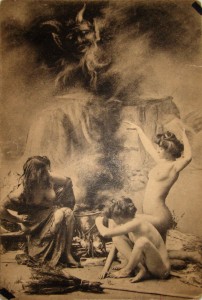 Today the clocks went back one hour in yet another attempt by âGovernmentâ to interfere with the natural order of things. Humans are not that much different to the rest of the animal kingdom in that we operate best in daylight, it has only been three or four generations since we operated a dawn till dusk work period. Which meant long days of labour in the warmth of the summer and shorter days in the Winter, this conserving energy and effort when food was at a low ebb. (By the way Samhain mean the end of lighter half of the year).

Industrialisation and the tyranny of the clock has disrupted this natural cycle.

So did I get an extra hours snooze this morning ? did I heck. The alarm on my sonâs blackberry went off at the ânewâ 5am and the cat decided that he was having no truck with this clock changing malarkey and at the new 7am start lobbing Mistress Guthrumâs bottles of perfume off the table in an unsubtle hint that he might want feeding because it was almost 8am in real time and it was light and had been for quite sometime !!

But what it did give me time to listen to was the very reverend Bishop of Hereford, whiffling on about the dangers of âHalloweenâ and that in Hereford there was going to be âfun â workshops and the parading of saints around Hereford with a brass band playing when âthe saints come marching inâ.

Well Bish, let me explain something to you and your johnny come lately religion (2000 years and counting) and your compatriots in Islam (1400 years and counting), as you battle out your competing theisms, the rhythm of life for humans has been going on for a lot longer than that and everybody who has lived before (our direct ancestors) the last 2000 years have not been damned to the big fiery pit of damnation.

Christianity when it was reintroduced to what has become England was not the religion of âthe peopleâ it was the religion of authority. Not for nothing did the Church of Rome sent missionaries to extend the light to the villagers of England but to the Courts of the myriad of petty kingdoms. This was a top down religion.

The Kings may have decided that this was going to be the state religion, but the clerics away from the Courts had to impose this new foreign deity on the countryside. This was largely only achieved by building churches on previously sacred sites and by adopting the festivals celebrated by the paganii (the countryfolk). Then as now life revolved around the family/clan/ group celebration of birth, marriage and death. It also revolved around the same rhythms of nature that physical survival depended in the days before the God ipod.

Ken Folletâs The Pillars of the Earth currently being shown on TV shows this undercurrent. The Kingdom may be in turmoil and war but the clergy were determined to build showy cathedrals and extend their temporal power, rather than tend to the poor and meek. The poor and meek were required to give âfree timeâ to the building of these edifices.

Poor they may have been, meek they were not. In many of the great cathedrals you will find âGreen Menâ carved bosses, and inverted sculptures of the local prior/bishop/donor lord with his face visible to the floor of the church, and with an assâ head carved above, showing what the carver really thought of him for all time.

In the seventeenth century, country practices,beliefs and midwifery came under attack by the âwitch-killingâ craze that lasted from the reign of James Ist to the last public execution in 1685, that was largely created by a centralising State wishing to impose conformity of worship.

So much of the previous practices and celebrations were driven underground, as nobody wanted to have their neck stretched by some religious zealot. However the survivals are still there. The bonfire night had its origins in the practice of creating two bonfires and driving livestock through the two fires to purify them for the coming year. The bones of slaughtered animals were also thrown onto these fires, as November is in Anglo-Saxon âBlutmonathâ, where the winter supply of meat was cured and laid in. Burning the bones was a rudimentary way of disposing of a source of livestock disease. These farmers knew a thing or two.

The âDevilâ worship and sexual abandonment has obvious antecedents in these months of celebration that the Christian Church frowned upon, but never manage to stop.

So this afternoon I will attend to my part of Samhain, by the preparation of pickled onions to last the winter months, whether or not there will be sexual abandonment I am not sure, but I live in hope !

Great image on this post. The series can be seen on the Sexy Witch
blog.

When you start looking into Things it is quite remarkable just how alike
most religions are.

And as for Light Bulbs, I do so agree. Iâve only got one decent one left
and itâs been there for eighteen years. These new fangled ones last a couple
of years if youâre lucky.

Thats why I originally came to read Anna Raccoon- to learn something new in
a concise and interesting manner.

Well done Guthrum, the torch has been passed.

We look forward to tales of sexual abandonment, but the British womenfolk
rarely seem to be impressed by a man who knows his onions , perhaps thats why
Anna escaped to France.

Itâs not just dark early but now we are forced to fumble around in the
gloom bereft of a decent light bulb.

âeverybody who has lived before (our direct ancestors) the last 2000 years
have not been damned to the big fiery pit of damnationâ.

According to fundamental Christian belief, thatâs exactly what happened to
them. Wes hal, min freond.

Hmm.. typical of the âstraw manâ caricature that is so rigorously
attacked by the anti-Christian lobby. Orthodox biblical Christianity teaches
that man is judged according to the measure of light (ie divine revelation)
he has received â and nobody is completely exonerated. We also know from
biblical theology that the Almighty is absolutely fair â in the absolute
sense of the word..
Wes hal aet Caedmons Catt!

Any relation to Peter Hain? All his stuff is ancient and mysterious with no
obvious connection to the present.