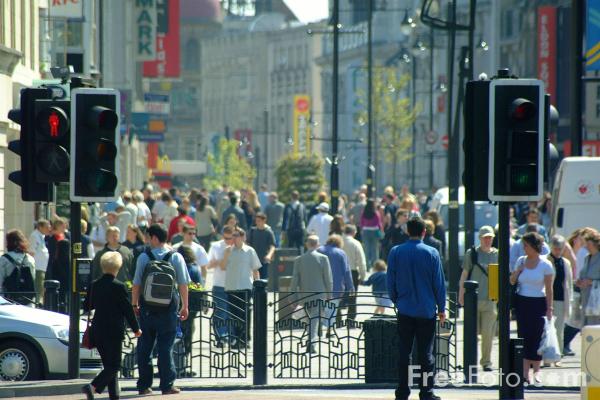 On the day that the news agenda will be dominated by the Experian report commissioned by the BBC showing that the North of England will be hardest hit by the spending cuts – and we are invited to conjure up an image of unburied bodies, babies starving in the gutter, and frail old people freezing to death in the winter – I have also received a press release telling me of £500,000 to be spent urgently on a load of bollards.

I kid you not – Newcastle’s Northumberland Street (above) is apparently such a tempting ‘terrorist target’ that the council have called in experts from M15 to advise them how best to protect the street from car bombers.

The result is £500,000 to be spent on 100 heavy duty bollards to replace the ones pictured above.

Councillor Nick Forbes of Newcastle City Council said: “We live in uncertain times and unfortunately these measures have to be taken in order to protect the public.”

“I am sure we would all much rather we could rely on people to behave in the way we would expect but we have seen the devastation that can be caused by determined terrorists and it is important we take whatever steps are necessary to ensure this never happens in Newcastle.”

Newcastle is controlled by the Lib-Dims. The local paper says that the street will be open to mobility scooters. Are you thinking what I am thinking? A councillor is also quoted as saying: “It is important to point out that there is no specific threat to Northumberland Street, or Newcastle generally, but we live in uncertain times and unfortunately these kind of measures have to be taken in order to protect the public.” God help us all.

“I wonder who owns the bollard factory……”

“We live in uncertain times and unfortunately these measures have to be taken in order to protect the public.”