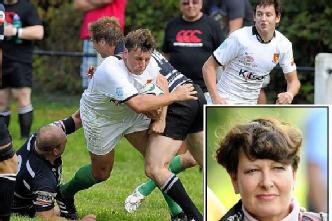 An easy mistake to make.

Burly half naked Rugby players milled around the dressing room in confusion.

The Newton Abbot team manager did his best to instil order. One player appeared to be missing.

“A woman came up to me and said ‘where would you like me’ or words to that effect, and I just presumed she was the physio,” said MacLean.

Ms Morris said the ‘visit had been an eye opener‘ as she hadn’t realised what the club did.

That Sister Eva bird, she was a right raver! Daily Dribble’s page 7 girl of
the week 6 weeks running as I recall. Can’t run an exclusive (being an ethical
hack) cos everyone knows that!

“I know how the poor lady feels!”

So does the entire home team.

Was she the hooker?

You rotten lot! in a previous incarnation before I took my VOWS
I once
through a succession of peculiar happenstances, mistaken identities and
curious coincidences was forced to share the post match bath with the LONDON
IRISH!
Thrice
The whole matter was blown out of proportion in the
febrile press, so I know how the poor lady feels!
Sister Eva

Good Sister E. L., what horrors you describe. After three involuntary
post-match and possibly whirlpool baths, I bet you found those eddies
waring.

Certainly not! That would be a rugby LEAGUE situation! I was strictly a
UNION girl!

Did you consumate the UNION dear Eva?

I will only say that I have always been a STAUNCH Unionist. And
some of them are rightly known as the Barbarians (giggle!)
Sister
Eva

HEAVEN forfend that you should have been subjected to anything
resembling a bit of UP AND OVER.

Or UP and UNDER, even.

Child,
Fortunately, after a mis-spent youth, I have found peace
with the Lord, with the Sisters of Blessed Relief, and my SPECIAL
friend Gildas. Gildas understands me, for being 1,600 years old he has
seen most things, and he has not always been a SAINT, if you know what
I mean.
But if he strays again, I will DEFENESTRATE him.
In love
and light
Sister Eva

I think I got a bit confused back there! All this talk of
post-match showers took me back to those heady days of my youth when
my now-husband and I used to stand in if Big Daddy and Giant Haystacks
couldn’t make a ‘personal appearance’ at some of East Anglia’s tinier
village hall venues; Giant Smuddstacks and I would wriggle ourselves
into some spangled body-stockings and hurl each other across the
splintery floors like there was no tomorrow! Just the memory of Giant
Smuddstacks’s more intimate lifts has sent me all-of-a-giddy even
now!

I am so glad you have found SALVATION and PEACE Sister E.L. I am
still troubled by a clicky-neck and an almost unworkable lumbar
region.

Gloria, did you ever don the “spangled body stockings” for a Sunday
night of choreographed pugilism at Cleethorpes pier? if so I was
likely privileged to see you perform,

She knows no shame at all that woman.

Nothing makes a half-nelson more bearable than a few
sequins!

Which reminds me dear, the office floor is still scattered
with sequins from the last time you burst a side seam…..

Funny, but I can’t find a report of this story via google.

There you go Brian….

‘Odd shaped balls’ is too big a cliche and is to be avoided.

So long as they didn’t give her the ‘Number 2′ shirt to wear – we’ve had
enough scandals recently!

Did the team form an orderly queue – or was it an unwieldy scrum?