I began to despair back in the dog days of August. Could there ever be enjoyment found in writing of politics again? Was it just a long grind ahead of us reporting that the Coalition was doing nothing very much and Labour were consumed by inner hatred?

Salivation (sic) is ahead of me â for this morning we have Gordon Brown posing as Edward the Confessor, and Dianne Abbott as Henry the Eighth. The day is shaping up nicely.

Let us drool over Gordon first in superb âI saved the worldâ mode. Gordon feels much âwoundedâ â as only a King can â by Tony Blairâs memoires. He hasnât been able, as Tony was, to anoint his own successor without benefit of degrading competitive tender.

Appearance is everything to our Gordon though, substance matters little, and so he has been in negotiations â how demeaning! â with the leadership campaign from his eyrie in Kirkcaldy, and is planning to travel down to Manchester on Saturday to bestow the crown upon his successor.

Hopefully the timing will work out for the news channels, and he can garble a few words of his excellence before he is seen to hand over the baton of rolled up Final Reminders to the new keeper of the Labour overdraft.

Perish the thought that the faithful might imagine they had chosen the new successor. 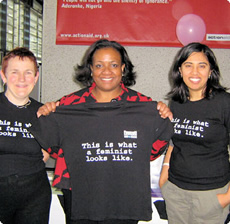 Dianne is in even finer form. For she has pledged that âwhen I am leaderâ of the Labour Party, she will overthrow centuries of the marriage between Church and State, and âas Leader of the Partyâ will:

âIn particular, one of the first things that I will do is introduce genuine gay marriage.â

Never mind the requirement to win an election first, even command a majority, or win the agreement of the Bishops in the House of Lords. Nope, as mere Leader of the defunct Labour Party, Dianne will wave her regal wand and command the newly formed Church of Abbott to henceforth conduct marriages between lovers of the same sex.

My ancestors left what is the Middle East (Palestine to Aden) some 20,000
years ago (female) and 40,000 years ago (male), statistically speaking that
is.

I telephoned my daughters and told them that they could relax as we werenât
Jews who stepped off the boat in Dundee (after embarking somewhere in the
Baltic) thinking it was New York.

They, bless their young PC hearts, were aghast until told them were were
Arabs.

Then there was a long silence as they tried to work out what to say
next.

Whereâs the comedy value in four useless poofs and a near spherical
champgne socialist? Oh waitâ¦I see it now!

Oh dear, my ironic piss-take at political correctness has stirred up the
Teuto!

Dear Joe, I am a feminist too (as I believe in equal rights)! Iâm also an
African, in the sense that we are all descended from Africans 12,000 years
ago. So maybe Iâm Diane Abbott?

So dear Gordon is standing by to curse, sorry welcome his successor â what
fun, thatâs just the start the unfortunate winner needs!

âSo dear Gordon is standing by to curse, sorry welcome his successorâ

But they wonât be His successor. Harrer Harperson is leader now
not Brown. They couldnât bring themselves to be rid of him when he *was*
Leader and they wonât kick him in the Balls despite him not being Leader any
more. What a spineless bunch.

The one on the left, wearing the âThis is what a feminist looks likeâ tee
shirt.

Are you sure the one on the left is a âheâ? Bit hard to tell, but there
does appear to evidence of broad hips and mammarian endowment.