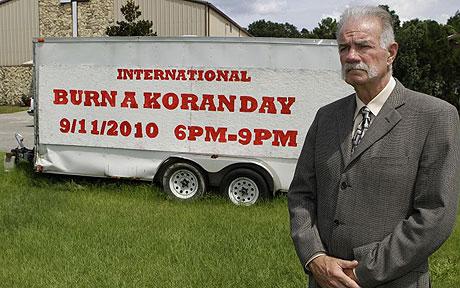 I am not an animal!

Terry Jones, “pastor” of the wonderfully ironically named “Dove World Outreach Centre” is going to turn the other cheek in true Christian fashion by burning the Qu’ran. The fact that there’s something in his time-worn features that makes me think of Joseph Merrick just add to the fun.

There is something curiously fascinating about this whole exercise. I doubt that Terry Jones has anything more in mind than attracting a few more bums to his pews, along with the attendant lovely lucre. And it’s perfectly within his free-speech rights to burn the Qu’ran or, indeed, the bible. Yet people who normally flock to support such actions, such as the American Civil Liberties Union have been strangely reticent.  Sarah Palin, famous for her populist idiocy, has denounced the idea. People are advising Muslims to say off the streets on “book burning day”. Celebrities not usually know for their interest in spiritual matters, like Angelina Jolie, are weighing in. The UN is said to be “concerned”.

Scanning the papers and websites, I can detect a deep-seated unease about the Qu’ran burning day. I get the feeling that people aren’t necessarily averse to burning the Qu’ran, but they’re very keen to say that they don’t approve of it in the hope that it will take them off the list of potential targets. People are clearly afraid that this blatant provocation will lead to retaliation.

And this is really where I overcome my natural revulsion of burning books: people clearly seem to be afraid of the consequences of this day. It may bring a terrible retribution. However, if it doesn’t, and if similar, future events don’t bring terrible retribution, then maybe people will come to accept that actually, Muslims are not any different from the rest of us.

Until we can burn a Qu’ran with the same casual insouciance as we burn a flag or burn the bible, we will not be truly comfortable with Muslims among us. These actions should bring opprobrium, strong words and discussion.

It’s such a pity this bloke’s not called Terry Flapps.

Everybody seems to be excited by this book burning and do not want to
offent the muslims. Yet the daily litany of killings by suicide bombers passes
un noticed.

First amendment lawsuit on the way.

Now, if only we had a real constitution over here…?

Does anyone like the idea of putting the Korans to the side and burning*
the politicians who orchestrated the Islamic invasion of the West to destroy
our way of life?

Actually, the Korans could be used as kindling, soaked in Saudi oil.

*After they have been tried for treason and found guilty by a jury of their
peers, naturally.

” The good pastor has clearly got some issues to work through, but the
reaction kind of proves his point.”

Like Anna, I don’t approve of book burning. But he’s played a blinder,
hasn’t he, with both imagery and timing. Can’t help but admire that, in an
appalled sort of way….

Seems to me that there’s more international outcry about the burning of 200
books on September 11th 2010 than there was about the murder of 3000 people on
September 11th 2001. The good pastor has clearly got some issues to work
through, but the reaction kind of proves his point.

“I disaprove of what you say, but I will defend to the death your right to
say it” now becomes “I defend your right to put me to death for saying
anything of which you disaprove”.

“I get the feeling that people aren

This episode in the continuing soap-opera of politics has a familiar
rat-like stench to it. One minor extremist threatens to take a provocative
course of action. The opposition threatens violent retaliation. Moderate
voices appeal for calm. The chatterati pontificate on Newsnight.
Problem-reaction-solution. Hegel again.
Has anybody asked the question why
this story has been given any publicity at all? Why have the media taken it up
and made a meal of it – rather than ignoring this silly pastor and his
ill-advised intentions? Aren’t they more foolish than the minister for giving
him the oxygen of publicity? They can be held morally responsible for any
resulting deaths or injury – if only for being so cynically
irresponsible.
So – who benefits from this? What is the ultimate objective
in letting it take its course? Answers on a postcard…

I’m probably mis remembering but I thought burning the Koran was the
required method of disposal as any other method was a desicration.

Organisations that begin by burning books end up burning people. I hope
Obama sends in the fire brigade to drench the nutter’s bonfire of hate.

Obama is (still, just) bound by the Constitution.

If he did such a thing, he’d be toast. Utterly. His poll numbers are
falling faster than a lady of negotiable virtue’s knickers in Wayne Rooney’s
bedroom.

He can’t afford to do anything, not after claiming his hands were
tied over the Victory Mosque.

He could issue an Executive Order as C-in-C citing reasons of national
security.
Will building the New York mosque (others are nearby)
threaten the lives of US service personnel?
The Freedom Tower being
built on the site of the WTC will be 1776 feet tall. That’s not very
diplomatic to America’s biggest ally in her War Against Terror.

“He could issue an Executive Order as C-in-C citing reasons of
national security.”

He could. He might as well write his resignation letter at the same
time. He’d be eaten alive. Even his handlers realise this.

He’s hoist on his own petard, and it’s utterly delicious to watch…

They will stop the burning i think,i heard somewhere there is an
obscure law in the state,where as you need to obtain a license ,to legally
have a bonfire,and the state hasn’t granted him one,apparently?
So they
don’t have to do anything that contravenes the constitution.

He’s painted himself into a corner, and even he knows it by now.

He’s not the Messenger of Allah – he’s a very naughty boy.

Very good point made here regarding the greater fear engendered by the
burning of one book over another. I do not support burning books, as it infers
a power to the words which go beyond sharing ideas, but in proving that this
book is just another ideology this would seem to have a greater purpose than
censorship.

Thats pretty much what i have to say in a rant over at mine.

Your version of events is much more refind than my own.
At the end of
the day,its one religious nut burning some other religious nuts book.Pastor
Terry Jones would probably still like to burn “Witches”upon a stake.

This is the problem: the social engineering traitors have allowed Islam to
heavily infiltrate the West. I guess those of us who object have different
ways of dealing (or coping) with this religio-political system whose leaders
are Hell bent on taking over the world by any means necessary.

How should Jews and Christians (and all non-Muslims) deal with a holy (sic)
book which threatens them with violence? Burning them seems a bit childish and
look-at-me-ish. I’m sure a more environmentally-friendly approach would be to
put them on the nearest compost heap and hope that devil’s ivy doesn’t spring
up and try to take over the whole garden.

Probably the most sensible thing for everybody else to do is just to
completely ignore this nutter. Most will, to their credit. Unfortunately, the
very people who won’t are the fundamentalist nutters.

Seems an odd sort way of “loving thy neighbour”.