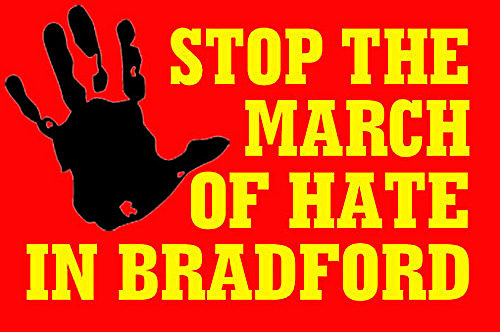 Today is a great day for British liberty, values and traditions. Today should have been marked by a protest march by the increasingly blatantly bigoted “English Defence League” and a counter-protest by the always blatantly violent, fascist and possessed-of-a-remarkable-lack-of-self-awareness “Unite Against Fascism”. Both represent points of view, for which, I have little time. Both are full of people that I personally would not miss for a heartbeat if they were not there.

Crucially, however, we have a long and proud tradition of tolerating wingnuts, raving lunatics and other strange types who have beliefs and ways other than our own. Where we used to have the right to free association and speech, we now have to beg for permission from the Home Office to express our views. And clearly, the Home Secretary and the Police feel that their convenience is more important than the people exercising their centuries-old rights of free speech. One would imagine that “liberals” in the blogging world would be screaming from the rooftops that the Tories are trampling all over our right, but they are curiously silent on the matter — when they are not being openly triumphant about their “victory” over the “fascists”.

Consequently, I can but assume that these so-called “liberals” and “progressives” do not care about freedom of speech per se, but only in their right to trumpet their beliefs and ideals.

If only these guardians of our mores and rights could see how astonishingly hypocritical they really are.

Toque, they’re not British nationalists. Here is Scotland we have our own
nationalist party which has no connection to the EDL. So perhaps they may be
English, Welsh and N Irish nationalists, but certainly not Scottish ones.

QM, by what definition of nationalism are the EDL English nationalists? Do
they believe in popular sovereignty, an English parliament or English
independence?

I’d call them British nationalists, who just happen to be mostly English
(BritologyWatch had an excellent post on the EDL and English
nationalism recently).

Totally agree. Anna is completely right on this. The EDL & any of us
should be allowed to protest wherever and whenever we want. That protest
should be peaceful and plod should be allowed to intervene if it isn’t. I’ve
looked at the EDL site and on the surface it sounds reasonable, however I
think it probably attracts some less desirable elements which puts me off the
whole thing frankly, but the right to protest should be fundamental in our
society; the right not to be offended should not.

It really is difficult to believe that anyone in their right minds, with
the benefit of hindsight, thinks it was a good idea to allow large ghettos of
people from an utterly different culture, with a particularly unpleasant value
system , to become established in various run down cities and largely
supported by the British tax payer. It is not difficult to believe that our
politicians are completely at a loss what to do about it.
That they have
decided to take the easiest course of action and use bliars uber politicised
plod force to supress any legitimate dissent by those effected by their
failure, is depressingly unsurprising.

Sorry to disappoint you but the EDL aren’t fascists, they are an apolitical
single issue protest group. Football hooligans possibly (though not all) and a
genuine working class movement divorced from the rhetoric of the left, but
definitely not fascists.

As I understand it the EDL, although they may be nutters, extremists and
even behave like hooligans at other times, have made a strong, determined and
successful attempt to stay within the law during their protests.
It seems
to me therefore that there are absolutely no actual grounds for banning their
protest other than ones of censorship of their dissenting, but neverthless
legally held, opinions.

There is an unholy trinity of fascists planning some action in
Bradford.
Besides the UAF and EDL hooligans; PLOD is bigging-up the
event.
Plod has the weapons and plans to break a few heads while collecting
some overtime. Plod needs trouble to justify its toys and funding. In fact the
three parties all need each other.

No, I wouldn’t care to have any of them round for tea either, though my
sympathies lie more with the EDL as they are constantly misrepresented in the
MSM, blamed for violence when they were not the instigators (in one case not
even there) and made out to be the new incarnation of the BNP, despite having
a Jewish wing and oddly enough Muslim members. The EDL are but one
manifestation of English nationalism which sees itself under siege by the
British state which in the words of William Hague “English nationalism is the
most dangerous of all forms of nationalism that can arise within the United
Kingdom, because England is five-sixths of the population of the UK.” So the
UK state sees the English asserting their rights to freedom of speech and
expression as a threat to the status quo, ergo they need to be stopped by any
means possible, either by physical attack by their pets in the UAF and Islamic
extremists, the MSM, or gagged and banned by the state itself.
No wonder
the EDL is growing with all the opposition against them.