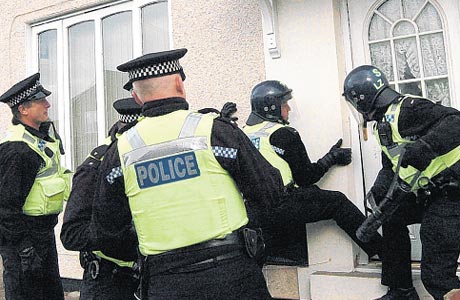 Once again, doing the right thing

Unlike many of the good readers of this blog, I have a passing interest in prurient matters. Not intimately, you understand, as such days are far behind me, but on a much more academic, human curiosity basis. There seem to be so many foibles and peccadilloes to reflect upon. [Get on with it! – Ed.]

Ahem! Anyway, my attention was directed to this post on the amusingly named âAnthology of English Prosâ blog. I commend the whole post to your attention as I lack Annaâs ability to summarise things with such admirable conciseness, but there are a couple of points I do want to draw out:

After this âprojectâ was concluded, they estimated that 2,578 women in England and Wales were trafficked, even though last yearâs nationwide crackdown, Operation Pentameter, involving all police forces, SOCA, the UK Borders Agency, the Foreign Office and various other assorted dingbats and wingnuts managed to convict only 15 people, following 528 initial arrests.

Operation Pentameter was another sparkling success in a similar vein, of course (please read the equally depressing link in its entirety as well). Of the 528 arrests made:

The end result was that, after raiding 822 brothels, flats and massage parlours all over the UK, Pentameter finally convicted of trafficking a grand total of only 15 men and women.

It gets even worse, though:

I think itâs fair for me to say that these grandiose, headline-making cross-border, cross-jurisdiction, police âprojectsâ and âoperationsâ are little more than excuses for the police to generate massive overtime bills, media coverage for senior offices and a ânarrativeâ of the Home Office âdoing somethingâ about crime. Trafficking human beings is an execrable crime, but there is no evidence that it is nearly as widespread as the hysterical media and government would have us believe.

Nor, clearly, is there any evidence that these enormous and expensive operations and projects achieve anything useful, given that the actual arrests of actual traffickers was clearly done by actual police just doing their actual day job.

So, if I might vouchsafe a suggestion to Theresa May as to how to cut costs without damaging front-line services, it would be this: stop spending millions on grandiose police operations pandering to the Daily Mail and find a real, common and prevalent crime that actually exists in numbers to focus on.

The problem with people that come to see the light in their middle years is
that they always think that everyone else should be looking for it as
well.
It has never ceased to amaze me that most women never come to
understand the fortune that they sit on.

The true purpose of Operation Pentameter is to pander to all the Puritan
Feminazis like Harridan Harmsmen, Katherine Rake ( Fawcett Society etc) who
believe firstly that men should be banned from doing anything that they might
enjoy and secondly they think that they have the right to tell other women
what to do. THEY DONâT !!!!!!!

You are perfectly capable of sticking up for yourself EV. I have an opinion
on

I have expressed an opinion, just not the one you claim I have at 13:44
today.

â¦âSo, if I might vouchsafe a suggestion to Theresa May as to how to cut
costs without damaging front-line services, it would be this: stop spending
millions on grandiose police operations pandering to the Daily Mail and find a
real, common and prevalent crime that actually exists in numbers to focus
on.ââ¦

Yes, like soliciting, or the running of brothels, for example.

May they should focus on crimes where peoples person or property are
harmed or taken.

Rather than where some ones morals are harmed.

It is not the Policeâs job to decide which laws need to be enforced and
which do not. They should apply the law, in both letter and spirit,
without prejudice.

Politicians decide the law, and at the moment soliciting and brothel
keeping is illegal, and as such should be investigated as and when the
Police find it. If and when the law changes, their actions should
change.

It does not really make sense from my point of view. Sure women get
trafficked. But that just means they get illegally shipped across borders, not
that they are in any way opposed to what they will be doing once there. But
why would you force a woman to do this against her will. Surely it would be
significantly easier to get women who cooperated with the process. Is there a
shortage in the world of women who are willing to have sex for money? Given
that I have been offered such in just about every country in the world in my
various travels I think not.

Iâd appreciate it if you stopped telling lies about me and my
opinions.

I vaguely remember this particular piece of fiction eminated iriginally
from ,yep you guessed it The Gaaaaaurdiaaaaaan.

If we legalise prostitution ,will the tarts be allowed to âsmoke a
blokeâ
in an enclosed area or will they have to have partially
(50%)enclosed
backyard sheds ?

PS
How come there are no health warnings on tarts thongs ?

Seeing as how it is The Oldest Profession in the World, you might think
that Authority would have given up on this one by now.

I donât know what to do about Pimps and Violence but surely these women
know where the nearest Police Station is. Making it a Legal Occupation could
help them far more than is being done at the moment. And at least they
wouldnât be afraid to ask for help.

Weâve been through this before with Lab MP Denis MacShane and his figure of
25,000 which was proved to be made up. Why is this still going on?

âONLY ONE had been subjected to violence, and NONE had been threatened with
violenceâ

From that same data then, (âthey estimated that 2,578 women in England and
Wales were traffickedâ), it is a statistical certainty that âtraffickedâ
sex-workers are safer & better-treated than our own native sex-workers.
The former should therefore be encouraged.

Really loved this article. Itâs what iâve been telling my stupid MP for
years. Thereâs very little trafficking, majority of the women consented to do
this work, & itâs time to decriminalise the whole business. Then we
wouldnât have to fund such debacles, & the authorities could concentrate
on the minority that are subjected to coerion, if any were, in what would be a
legitimate occupation in a controlled environment.