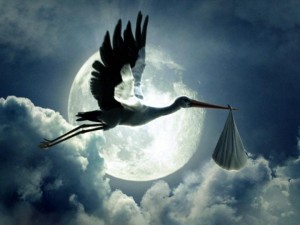 Congratulations to David and Samantha Cameron – delivered of a fine 6lb 1oz baby girl at the Truro Hospital whilst they were on holiday.

Big newson Pravda this morning!! Not least that “reliable sources” seem to
suggest that the child may have a Cornish name.

Predictably, the bleating Sian is encouraging all the plebs to come up with
suitable names while they digest their morning Pop-Tarts.

On a slightly less cynical note I do hope that all is well with the
child.

Now back to the cynicism – I’ve had this image in my head for the last
hour, of Nick Clegg throwing his hat on the ground and jumping up and down on
it, it’s really made me chuckle.

There is something not quite right here. Dramatic early birth. Just popped
in for a check up. Caesarian Section. Baby just popped out.

It sounds to me as though they wanted to get it over with before Parliament
returned after The Summer Recess, and so that Dave could pay lip service to
Paternity Leave without actually taking any time out. He can’t afford to leave
Clegg in charge while Parliament is actually sitting. God knows what might
happen.

Eleanor, you get the picture then?
The moment Cameron announced to the
security services that he was taking a holiday in Cornwall, that private
room in Truro was kept vacant, the gynaecologist was on permanent standby,
the anaesthetist had to cancel his golfing holdiay in the Algarve – shame to
waste all that effort and have Cleggy running the country for too long…

vervet??????
Suggest all you like…I hear that there’s still a little
free speech left in The Septic Isle…for now.
I know that el Cid was/is a
Spanish hero but otherwise you have lost me.
Is the ‘cid’ you mention
chavspeak, graudianistaspeak…or a subtle combination?
I wished the happy
couple well…not enough for you?
If you are unable to recognise our current
PM as a Blair clone in a perhaps better suit then, like many of your
countrymen, you haven’t been paying attention,,,which is why the country is
the third-world Welfare dump that it is.

In the last 47000 earthyears I have visited your planet 11 times
but
this last trip 97-10 has (apart from your black death spell) has
been
most unrewarding. Sorry must go ,matron is bringing me a custard
and
a clean bib.BTW Major Tom never told me SamCam was up the stick

permanentexpat – ?????
Suggest you lay off the cid for a day or two.

I can’t quite get off on this. Sorry.

Well, I’m quietly rather happy for them, Eleanor, if this new baby girl
brings them some joy to balance the life-long loss they’ll feel every day
following the death of their son Ivan. However, thanks to Mme Raccoon take
on the matter, I will also always remember that the new baby was born, by
caesarian section, just a day or two after a lovely photo of the expectant
pair graced the front pages of many of the Sunday papers and in time for a
few more front-page piccies when they go back to Downing Street. On this
occasion I am neither cynical nor gullible, I hope, but just happy that a
new baby will be loved and looked after.

I will suspend cynicism for the moment
Today I had (no, wanted) to
give up my seat on the train for a little girl, very disabled, in a
wheelchair. Her parents where there, and obviously doted on her.
She
reminded me to forget my own petty troubles.
Here’s to – new
life!
Until they become teenagers, of course!
G

Weeeelllll…………..wasn’t he CLEVER!……I’m completely agog & over the
MOON!!!. Of course I wish them the best; callow I am not…..but congratulations
will come when the stupid tosser comes to his senses on AGW & the
EUSSR…..I’m not holding my breath….(besides, there’s so much MONEY in the scam
& the later EU sinecure….set for life at our expense.)

Would it have appeared too EU-enthusiastic for the weak vassal to have
announced the birth-weight in metric units; if he could find someone to do
the conversion.

Just so long as he doesn’t dangle it over a balcony somewhere.

Yes, it has been noted that it was by Caesarean, conveniently far from
London, just in time to allow a decent paternity leave followed by a
triumphal return to Downing Street with the aaaah factor carefuly swaddled
and held up for the adoring cameras.
I’m just an old cynic.