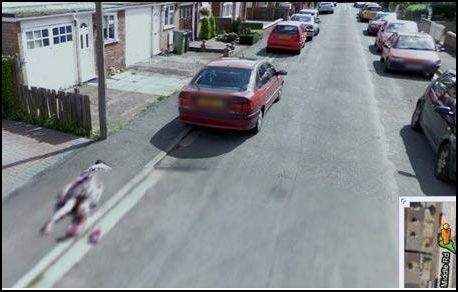 This is the Google street view for Middle Road in St Johnâs, Worcester.

A Google spokesman has said:

âThe imagery in Street View represents a snapshot in time of Britainâs streets and is no different to what anyone might expect to see for themselves around the country.

âSometimes that means our cars inadvertently capture odd or inappropriate moments as they drive past.

âThis is why we have put in place tools so that if people see what they believe to be inappropriate, they can report them to us using the simple reporting tool and the images will be quickly removed or further blurring applied.â

Am I reading this correctly? Google donât see anything unusual in the sight of a young girl lying face down in the gutter, either dead, or dead drunk,  on a British street?

(As it happens she had just momentarily slipped when the Google street view car passed, but they didnât know that!)

Does google show boarded up pubs and clubs ,that would be handy for
my
Sad England 2011 calender

8400 pics ,I/lle have to brush up my collage technique.

I think this is a storm in a teacup. The Google camera car must have had a
driver, and they would surely have seen the girl as they drove down the road,
and known that she was simply messing around. Otherwise the driver, like any
other responsible adult, would have reported it.

Am I reading this correctly? Google don

According to the Daily Fail today, the little Worcester lass in question
was playing possum â which I suppose is somewhat different from raccoon..

I hope someone re-members her, poor girl.

Disturbing, on a number of levels
Gildas the Monk