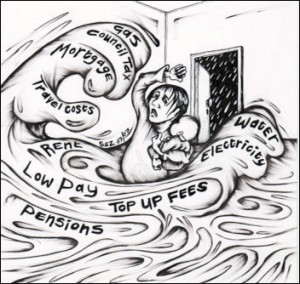 This is nothing new, even before the Indus valley floods the Aid Agencies were reporting that they were having to close offices in Pakistan due to lack of funds and ‘distribution problems’ – usually another word for graft and incompetence in both Pakistan and at the UN.

An unscientific straw poll yesterday amongst work colleagues showed that nobody had donated to the Pakistan appeal, and that the buckets in the local supermarket were largely empty.

These are some of the comments-

‘It’s a rogue state, if they can afford the nuclear bomb they can look after their own’

‘The money will get diverted to a corrupt elite, and not to the people worse affected.’

‘ They are sheltering terrorists, and there is no guarantee that the money will not cross the border to the Taliban and used against the British Army’

‘If Muslims are so morally superior and hate the west, why should I help them out.

‘Charity begins at home, we have enough problems here’

Gordon Brown in one of his first speeches since leaving office also proved that in the face of all the evidence to the contrary he had got it completely wrong again.

By and large there was  precious little sympathy for a country that was seen a scorrupt, perceived as in league with militant Islam and violent, in contrast with the giving after the Tsunami. Admittedly that was before the economic crash, but westerners have holidayed in Thailand and Sri Lanka and have empathy with the people if not with their governments. There appears to be little empathy with the people of Pakistan, yet there is a large Pakistani constituency in this country that equally receives little empathy. Media stories over the last two years repeatedly carry stories of ‘honour killings’ and forced marriages of young girls to older men in Pakistan.

This week alone the  UK based parents of a young woman were gunned down in Pakistan after she had refused to marry, and the financial compensation was not deemed adequate to satisfy the sense of slighted ‘honour’. This was  against the background of the flooding.

Three years ago, I went to a meeting in London to discuss a housing project in the earthquake zone of Pakistani administered Kashmir. That was two years after the 2005 quake. The victims were still living in tents.

The whole meeting was taken up with the ‘representatives’ wanting to ‘negotiate’ their ‘commission’ and with them saying that the local Generals would need at least 20% of the value of the project. It was an eye opener at the brass neck and corruption of these people and their insistence that this was being funded by the UN. I still have the notes where I calculated only 26% of the project funds would actually result in any houses being built.

Needless to say we did not get involved.

This authority has highly been criticized for luxurious non-developmental spending and its false statistics. Only practical reconstructions and rehabilitations were done by the foreign governments including Turkey, Japan and Saudi Arabia and UAE. UN, US and UK organizations came under criticism for not doing or taking practical rather focusing on training and seminars costing millions and high salaries.

The Pakistani Military and its Intelligence service are running the country, as they have done so largely since partition.

The Western public are not stupid, once bitten twice shy, and despite the blandishments of Gordon Brown and the ‘third sector’, they are not going to finance this one, no matter how many times the BBC run this as their lead story.

It is a sad fact that any money that is raised is largely going to be purloined along the way from collecting tin in your High Street to Flood victim.

Since starting this post, I have listened to an interview on Radio Four about the BP Fishermen compensation scheme in Louisiana. Compensation is contingent on the production of a commercial fishing licence. Guess what? Applications for the sale of commercial fishing licences have increased by 2.200 despite the fishing grounds being closed. The first arrests for fraud have been made.

Surely the BBC must know they are flogging a dead horse when they keep on
running the Pakistani Floods as a lead story. Why don’t they listen to the
people? is it because they are unaccountable, and they are just doing what
they have been doing since 1997 on Blairs orders. You want us to hand over
money to a country that follows an ideology that basically wants the west to
completely change the way it lives. Now they want our help now? You mean they
don

This is the same country that wants to wipe the West off the
planet.
They can …. my ….

You want us to hand over money to a country that follows an ideology that
basically wants the west to completely change the way it lives. So they want
our help now? You mean they don’t really mean what they say about the west? Do
they f*ck, they want us to all die in a fiery hell – and for that reason let
Allah come to the rescue.

This morning I encouraged the people I met to redirect their contributions
to re-embellish the tapestries of the much worn cashmere rugs in our local
hall! The luxuries that are taken for granted by their people – obscene.

As a gay man and a filthy infidel why on Earth should I donate to a country
that thinks I should be put to death to satisfy the medieval barbarity they
call their religion? Allah`s all powerful? fine, Then Allah can miracle the
tents and food supplies into existence `cos they`re getting f**k all off
me.

Perhaps the endemic corruption is the root of the problem we have with
Pakistan ( and Afghanistan? ). The locals are treated like crap in a sort of
feudal system. Along come the Talibs whom I hear are on the scene offering aid
to the serfs. Who are you going to favour? Your feudal master or the
revolutionaries?

They may have a belief system incompatible with our western liberal
ideology, but to a peasant being treated like crap maybe the ideological
purist seems a better personal bet than the guy who owns you today.

Its the Tzar/Lenin: Batista/Fidel: Reza Shah/ Khomeini all over again.
History repeating itself.

I am giving nothing to this appeal. I don’t need to feel justified by
corruption in the distribution chain. I have reasons which I refuse to discuss
here. I did hear an interview on the world service today where the flood
victim said it was God’s work and that God would see him all right. Not I
suspect calculated to tug at rich world ( lapsed) Christian heart strings.

Devastation challenge.
Je-Ho-Vah 1
Allah 0
You get the feeling
that the vengeful, omnipresent, omniscient and omnipotent God of the old
testament is getting a bit ticked off with these turbulent infidels.

Now i’m as much of a critic of politicians as anyone but the fact that
Zardawi couldn’t even be arsed to go back home and at least fein some kind of
proactive response is unbelievable. However, the fact that the internal
corruption of the place is so intense that he’s probably the only chap who can
reasonably order people about because of in fighting and jockying for position
etc. The comparison with China when the troops were out immediately and
systems kicked into place to box people off as soon as was incredibly
poignant.

Very enlightening and apposite. Though it is hardly a “MORI” poll, the
posts on this topic on the rather forthright “Grumpy Old Twat” blog make
interesting reading. Seems sympathy is in short supply!
Gildas the Monk

Having looked at how certain charities operate over the last two years, I’m
not even confident of the money making it past a lobbyist’s consultancy fee
here, let alone all the way to a corrupt official. The chance of it helping
anyone who needs it is nil. I’d like to help but I see no practical way to do
so.

Two self governing countries (India and Pakistan) legally came into
existence at the stroke of midnight on 15 August 1947. Independence Day is
celebrated on 14 August to avoid the appearance that Pakistan was seceding
from a sovereign India.

They must have noticed the Indus is prone to flooding – the area has been
inhabited for at least 5,300 years. Even the ancient Egyptians learned to
manage and profit from the Nile’s annual flood. If, over the intervening 63
years since independence the Pakistani government had made reasonable
emergency plans, then even with the unprecedented scale of the disaster they
would have some infrastructure capable of responding.

Instead, they have systematically grafted and grifted and raped all sources
of aid. Now the infrastructure is just not there, so even if billions were
diverted to deal with the problem, it would never reach the people who need
help .

I’m sorry, really I am, but this is what happens if you don’t hold a
government to account and adhere to a religion which refuses to adapt to a
changing world. The only thing we can do is learn our own lesson from
this.

I heard this at about 8:36 on the Today programme this morning. I
wouldn’t give a penny to Pakistan after hearing it. Why don’t they sell their
nuclear weapons to Obama to raise cash for tents?

The other point about the BP disaster is that many fishermen were claiming
loss of livelyhood and that they would suffer for years to come. They didn’t
mention at the same time that they were being paid handsomly by BP to help in
the clean up. Money they were raking in from BP was more than the money they
would have made if they fished.

However we collude at this looting.

How much of Band Aid’s went directly to the starving and how much to buy
clapped out trucks to truck what food was transported after local war lords
has taken their tithe?

I am coming to the conclusion that many of the “established” and
politicised “charities” are no more than self serving money scams .

Sad but many others, I think, are arriving at the same conclusion.

“How much of Band Aid

That’s because he’s a talentless, foul-mouthed mick who would not have
had a ‘career’ for the last 25 years had it not been for his bleeding
heart sideline.

BTW All that has been achieved in Ethiopia since Band Aid, by Western
interference, is a near doubling of the population to almost 70 million,
none of whom seem able/willing to attempt to feed themselves.

President Zandari, Mr 10%, is a Billionaire and the problems are in his
region. Why does he not dip into his wealth? Where is the Saudi oil money? Why
does the hated infidel have to clear up the mess, one more time? All questions
that have to be answered before I dip my hand into my pocket asI normally do
for disasters such as this.

I already gave…via this government…against my will and I certainly don’t
intend to donate any more.

Why do we fall for the five card trick every bloody time?

Contributions to Pakistan, and many other countries, are not voluntary in
the UK. We are all forced to contribute through our taxes, whether the actual
recipients of our money need or deserve it or not. Individuals may of course
opt to donate even more.

I would answer the question in exactly the same way as everybody else – why
should we give money to a corrupt Islamic state that can’t even get the basics
of town planning right? Y’know, don;t allow building in floodzones, keep the
rivers dredged and drainage clear etc.

I agree – but assumed you were talking about Worcester!
G the M