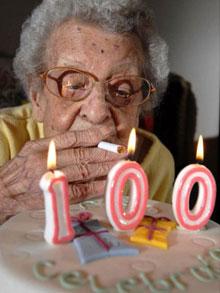 Throughout her life it is thought the defiant OAP, who outlived her husband, son and all of her 10 stepchildren, smoked more than 170,000 cigarettes.

Mrs Langley, who made headlines at her 100th birthday after being photographed lighting a cigarette with a candle, began smoking to calm her nerves during the war

The pensioner, of New Addington, Croydon, south London, was recently persuaded to give up her habit due to her failing eyesight after she could not see the end of a match.

She had already cut down from her five-a-day habit to just one cigarette last year because of the credit crunch.

On Thursday, her family disclosed that she had died just one month short of her 103rd birthday after having beaten cancer in her 90s.

Speaking at her 100th birthday party, she said: “I have smoked ever since infant school and I have never thought about quitting.

“There were not all the health warnings like there are today when I started. It was the done thing.”

She then told her local paper last year that she could no longer afford her habit.

“The price keeps going up, so I’ve cut down to one a day. I am not that well,” she said. “My eyesight is very bad and I have to get someone to buy them.”

Despite the numerous health warnings, she insisted she never suffered because of the habit because she “never inhaled”.

Members of her surviving family, who this week attended a funeral service near her home, paid tribute on Thursday to the “feisty and stubborn” pensioner, who died late last month at her old peoples’ home.

Anne Gibbs, who lives in Lincoln, Licolnshire, said her great aunt loved “Monopoly and cards” but never smoked inside.

“She always enjoyed a smoke and a drink. But it was a maximum of five cigarettes a day,” she said.

“She stopped just before Christmas because she could not see the end of the match to light it. She said to me ‘I miss them’, but she was determined that would be it.

“There was a lot more to her than just smoking, she was a family person.”

She added: “She was feisty and stubborn and she also had a wonderful sense of humour. She was incredible right until the end. She was a voracious reader and loved crosswords and puzzles.”

Mrs Gibb said she got cancer when she was 88 but later “bounced back” before having a pacemaker fitted when she was 98.

“It was only the last six weeks her health deteriorated,” she said.

Mrs Langley was born in Croydon in 1907 as one of seven children.

Before meeting her husband Bob, a world war veteran 28 years her senior, in a Croydon pub, she worked in a laundry and as a chamber maid.

Already a single mother, she moved into his home as a governess to look after his 10 children, before they married when she was 26.

I only SMOKE when I have had a drink or made love, so I’m a 60 A DAY girl
now.
Cutting down has definitely made a BIG saving
In love and
light
Sister Eva Longoria

You want to parcel this post up and shove it down the throat of that wretch
Deborah Arnott!

Shsh !
According to the ritcheous these people don’t exist.
Problem
for them is this is far from uncommon.
Intelligent people know
this.
Dummies just accept the lies as truth.

RIP – what an amazing woman. It could not have been easy to be a single mum
in those days. I feel assured that as one who started smoking aged 8, that I
can live as long. Whether I’d want to in an age that hates me is another
matter.

I’d prefer someone farting than smoking. At least a fart disperses pretty
quickly and it doesn’t linger on one’s person … unless one gets shat
uppon.

And I’d better add that some of the experiences I’ve had with smokers
bordered on bullying. I’m glad to have the law on my side now.

In civilised countries farting is deemed offensive, so it’s not done in
esteemed company.

If I sprayed you in my favourite aftershave would you not be offended ?
Even if it was nice aftershave, I’m sure you’d be offended that I’d decided
how you were going to smell for the next couple of hours.

If – on a bus or in a room – if I’d filled your lungs and digestive tract
with some unpleasant flavour that you don’t like. Would you not be offended
?

So it was right to banish smoking to special areas – though I don’t think
it fair for people to be forced to smoke outside.

What was offensive was the assumption that I would put up with it. Or the
offence taken when my response to the question “Mind if I smoke ?” was “Yes.”

Things are much better and fairer now. And things were changed because one
person enforcing something unpleasant on another ” else they could eff off.”
was plain wrong – and yes. Offensive.

Offensive to non-smokers? No, wrong word and it’s an important distinction.
Unpleasant maybe. It’s not offensive though, if you don’t like it there are
lots of ways to avoid it. Like you say, you wouldn’t date a smoker. So don’t.
No offense given, none taken.

Offensive is a word bandied around far too readily these days. By your
argument, farting is offensive to non-farters, and you would never date a
farter. All fair enough, but you wouldn’t ban farting would you? Even with the
comedic potential of enforcing such a ban…

My sister-in-law tried to effect just such a ban on my brother. She went
away for the weekend and I stayed overnight at their place. I don’t think I
will ever forget that episode; the five packets of love-hearts probably
didn’t help, and I laughed so much I had stomach cramps.

Aye, from such small things are lasting memories made…

Very funny.  En passant :  the Roman emperor
Claudius (the one that conquered Britannia)

Each to their own unless it offends the other, I say.

I know more health conscious people who have died of cancer at a young age
than smokers.

The fact is though, that inconsiderate smoking is offensive to non-smokers.
It’s a nasty, stale smell and it gets on your clothes and in your hair. If I
were single I couldn’t date a smoker, no matter how pretty or successful. It
makes them instantly unattractive – rather like gaudy tattoos only worse.