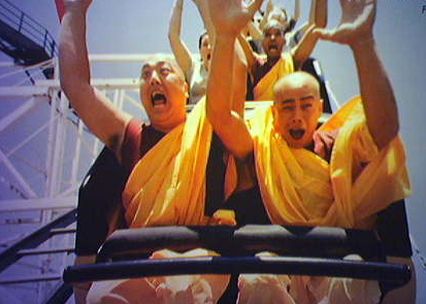 Here in the Abbey it is very quiet. Almost all the other monks gone off on holidays to somewhere called Aya Napa, but at least I have been able to hustle pool in the Nun and Firkin and visit my friend Sister Eva Longoria from the Order of Blessed Relief.

However, since most of the politicos seem to have shut up too, I have had to find my amusement elsewhere in the weird and wonderful world of the press during the annual âSilly Season.â

Imust be developing some form of compulsive behaviour, because I have been compiling a lot of lists lately. Hereâs another one, for a bit of light relief. My Top Ten âSilly Seasonâ stories which have been in the media so far this month.

1. Britainâs largest wasp nest discovered in Southampton pub.  What is that distant buzzing in the atticâ¦.?

2. Jesus spotted in crop circle near M4. Two stories for the price of one. Titter ye not, ye of little faith!

4. Cat rescue man is trapped in tree. Well, it was in Devon.

5. Remains of John the Baptist found in Bulgaria. You never know!

7. âMoob Manâ lurks behind Sue Turton! In case you wondering, itâs NOT me!

8. Adolf Hitler must stay in care. A tad harsh, and a shame about the cake â¦.

10. Sea Monster sighted off Paignton. A seasonal favourite, and no, itâs not a log.

I finally realised that the silly season was back in full swing when I
noticed the headline in the Daily Express whilst out shopping this
morning:

And there was me thinking that the paper had given up the ghost on this
matter. Silly me.

I hope this provides a little light relief for the weekend! I merely add
that on a full reading of the article âMoob Manâ (No 7) also gets to do his
strange lurking stuff behind the lovely (ahem) Harriet Harperson!
Gildas
the Monk!