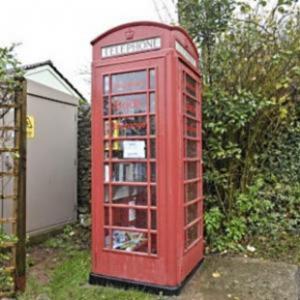 iDaveâs Big Society is up and running. All those doubting Thomasâ who said it would never happen; people were too selfish, too dependant on the Nanny State, there was no community any longerâ¦.

OK, itâs not the big bang the ConDemâs might have wanted to show the essential soundness of their idea, but itâs a start. Little acorns and all that.

The phone box outside was vandalised. BT offered to sell it to the Parish council for Â£1 rather than get it working again.

Lo! Lewis Cooke who runs a newsagent in nearby Skipton, is now delivering food and newspapers to the phone kiosk.

The âstoreâ in Draughton, near Skipton, North Yorkshire, has been up and running for two weeks and is operated according to the âhonesty boxâ principle, with residents leaving payment for any goods they take.

The kiosk has been adapted to include a shelf to hold newspapers and groceries such as jam, milk, tea bags, sandwiches, butter, cheese and biscuits.

Titter Ye Not. Marks and Spencer started on a market stall.

Well, it had to start somewhere and I just thought youâd be interested to see the first green shootsâ¦.No?

but in terms of localism â wouldnât the local good folk feel more empowered
to deal with said packs of feral youthsâ¦?

Perhaps the urban phone boxes could be used as mini-prisons for the
feralkinder. They have toilet facilities already. Two days in a modern version
of the stocks might lose them ârespecâ innitâ.

Sadly I agree with Specky â in any urban area (and quite a few countryside
ones) the feral yoofs would âave it on their toes with the lot, or just
vandalise it.
A sad fact.
Gildas the Monk

Wouldnât work in a city the smackheads would just nick it.

Great idea â but Iâm not sure âhonesty boxâ accurate describes the
operation, as customers have to pay using bank cards when phoning in their
orders, which are subsequently left in the box.

The âhonestyâ bit appears to relate to none of the other residents taking
what someone else has paid for.