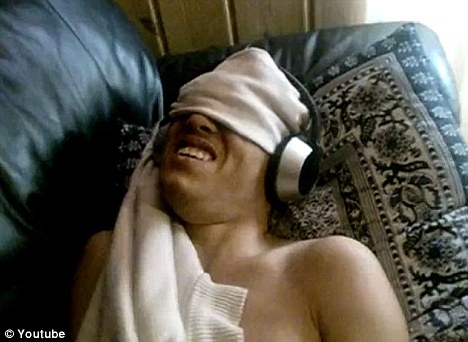 “They put on their headphones, drape a hood over their head and drift off into the world of ‘digital highs’ called i-Dosing.

Oh dear, what you going to do now? You can’t ban covering their head – very unBritish don’t you know. Whoops! You did ban ‘hoodies’, perhaps a ban on children covering their heads? How about banning headphones? Not very practical, think of all those call centres….

But teenagers are getting ‘high’ on i-Dosing; we must be able to ban something?

“This is the world of ‘i-Dosing’, the new craze sweeping the internet in which teenagers use so-called ‘digital drugs’ to change their brains in the same way as real-life narcotics. They believe the repetitive drone-like music will give them a ‘high’ that takes them out of reality, only legally available and downloadable on the Internet.”

‘Repetitive drone-like music’ – well you managed to ban the Vuvuzeula on health and safety grounds, perhaps you could ban ‘repetitive and drone-like’? That’s the end of Prime Minister’s Question Time if you do – and quite a few blogs as well.

“But there has been such alarm in the U.S. that the Oklahoma Bureau of Narcotics and Dangerous Drugs has issued a warning to children not to do it. If you want to reach these kids, save these kids and keep these kids safe, parents have to be aware. They’ve got to take action.”

– Despite the fact that the foremost expert has told you that:

Dr Wahbeh denied there was any possibility that someone could experience similar effects to cocaine or ecstasy. She said: ‘We did a small controlled study with four people, and we did not see any brain wave activity shifting to match the binaural beat that people were listening to.’

However, other researchers say the ‘high’ listeners claim to feel may actually be a placebo effect determined by the individual’s desire to feet (sic) it.

Nothing else for it, you will just have to ban people ‘thinking’ they are high…..

Coming to a legislator near you shortly…

Do be honest I feel this is just a big scam -_- I have never heard of I
dosing in my life, until this article. I have been listening to techno/
industrial music for about 4 years now. And never have I had any experiences
of being “high.” I tried covering my head and listening, I feel nothing. I
think that it was just a sensation for upon the listener by the creator. “Oh,
listen to this it’ll get you high

,” and because it is in the mind of the listener now his mind is already set
on feeling that sensation, however if you were to try it with someone that did
not know it was supposed to get them “high” I bet they wouldn’t feel anything
accept for maybe annoyance because this “I-Dosing” is just crappy techno
music. As for the people that went crazy you might want to check their records
for mental instability. Also take into account that we are talking about
teenagers. Who have been scientifically proven to be at a chemically mental
disadvantage. Maybe it is just a false escape for them. Maybe they want to get
high, just legally or with out destroying their body. And so they force their
mind on it, but that is not a real high, it is an illusion. This whole thing
on music stimulation being wrong is BS. music is speaking emotion threw
instruments and sounds, of course it is supposed to be stimulating. They might
as well ban Art Dance and all forms of literature while they are at it -_- do
you not feel relaxed when you are at home? Is it not stimulating? Oh you must
be on some sort of legal drug because you are feeling things…
god it feels
just like that movie Equalibrium.

its a made up drug. i take it with cake.

Where can I hear this stuff?

Why don’t people pretend to ‘get high’ on politicians’ spoutings?

Maybe they’ll then get banned.

Come on you lot, it is so obvious.
Administer it free on the NHS to make
people dependent.
Encourage it loads, and then TAX it.
We could get out
of the recession in a very short while.

Thank you, although I cannot claim full credit. (I had help!)

Back in the day, my Dad used to say all the same sort of things about “this
new-fangled rock and roll” replacing “good music”, the good music being stuff
sung by David Whitfield, Anne Shelton and Richard Tauber. (Who? Who? Who?)

Julia is right to make the point about idiots clamouring to ban things. But
suppose we ever ran out of idiots? What’s going to happen then? Chaos!

The world might, just might become a better place to live. Unfortunately
I can’t ever see such a scenario occuring.

As the saying goes “Make it idiot-proof and someone will make a better
idiot.”

When I was young, and I think I was, once, all those years ago, it never
occurred to me how bloody suggestible and gullible the younger generation is.
That’s probably what makes hindsight so enjoyable from time to time.

Is it keeping them off the streets?

Eleanor,
Yes it is, but they are enjoying themselves – something must
be done!
Experts must be appointed to a consultative board, reports
written, risk evaluated, in depth studies commissioned, there must be
something about it that can be banned, surely?
Good grief, we can’t have
the country flooded with teenagers lying on their beds listening to music,
think what it could lead to? Younger children could wander into their rooms
and before you know it they will be listening to teletubbies…….

We need a Sounds Czar!

And a charity, don’t forget a charity. How about “Potential i-Dosing
Danger League Erasure” . PiDDLE.

So many evils yet to be banished! Adreniline highs for instance. Those
athletes will have to be stopped somehow. And what about sex, that will have
to go! And the exercise of power over others…. errrmm, no sorry, forget that
one.

Except, it’s not just that, is it?

Idiots will clamour for ‘something to be done’, as Anna points out.

Move along now, nothing to see here …