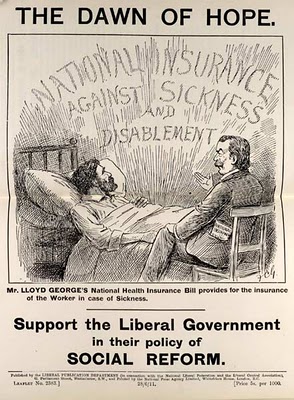 I hate the men who would prolong their lives
By foods and drinks and charms of magic art
Perverting nature’s course to keep off death
They ought, when they no longer serve the land
To quit this life, and clear the way for youth.
–Euripides 500 B.C.

The American professor of Medicine Joseph Fries coined the phrase ‘compressed morbidity’ in 1980 to describe his belief that you could improve the economic health of a population by compressing the period – the morbidity – between the onset of illness and eventual mortality. It was essentially a rallying call for the medical profession to engage in preventative medicine, not just curative medicine.

Keep the ‘ageing’ healthy for as long as possible, and you reduce the cost of nursing them onto their death bed and out into the morgue.

There are two basic problems with this. One, we are all ‘ageing’; five year olds are ageing, five day olds are ageing, yet somehow the term has been reserved exclusively for those who are no longer economically active, to the point where ‘ageing’ is a euphemism for those past, say, 60. ‘Ageing’, ‘grey haired’, ‘balding’, ‘pensioner’; we have myriad terms to denigrate the needs of those who have paid the most into the NHS service, leaving the lion’s share of the pot for those who have only just woken up to the possibilities of having their ears pinned back/their appetite curtailed/ their tattoo removed, to enjoy the bounteous NHS.

Secondly, like the burning candle, you can compress morbidity from both ends. Costs can be reduced by making sure that those who have entered a period of morbidity exit through the final curtain with indecent haste. It is this latter definition which seems to have taken hold in the UK. From the legislation which transfers a Doctor’s powers to determine treatment to the legal profession with their definition of a ‘futile life’, to the widespread rationing of treatment within the NHS – compare the treatment of a debilitating stroke between a 25 year old and a 67 year old. The efforts put into making sure the 25 year old is returned to economic viability can only be justified by the utilitarian belief that this rationing brings about the greatest good for the greatest number of people.

It entirely disregards the fact that the ‘pot’ being argued over represents the savings of those elderly who were forced to pay into it in order to ensure their medical treatment when they became old and infirm. Those who are now in their 90s were once quite happily preparing for their own morbidity by voluntarily pooling their spare resources into Friendly Societies. They were ordered into the National Health Service by Lloyd George, egged on by the medical profession which sought power over all monies set aside for health provision.

The Government speedily took control of the medical profession through NICE, which effectively curtails the profession’s distribution of resources. Now the GPs are to be handed the pot once more, but not before the legal profession have been handed the reins via The Mental Incapacity Act.

Curiously, the one thing which may give some measure of control, or at least influence, to the largest stakeholders in the pot – those over the age of 60 – is the announcement from Ian Duncan Smith that he is bringing forward the date at which retirement pension is payable to 68.

There will be groans from those nearing retirement that they must work longer, but the wider effect of this will be the postponing of the age at which you are seen to be, in the words of the motor trade, ‘beyond economic repair’. You may not be able to find employment, you may have to live on benefits, but if you are still considered to be economically viable by the state, the NHS and the legal profession will be forced to rethink their definition of ‘aged’.

It is not the cost of the paltry state pension which is frightening the life out of the government, it is the cost of keeping those useless drones, we pensioners, in any semblance of ‘good repair’.

The whole idea of scientists working to prolong active life (wasn’t there
once a dog food that did the same) puts me in mind of Aubrey De Grey, the
longevity expert who predicts the human being has already been born who will
live to be 1000 years old.

But at least Aubrey has an amusing beard.

I agree with that Disenfranchised of Buckingham. I know about a couple of
ladies with perfectly good working and not unattractive noses who got them
broken and reset on the NHS. We’ve all heard about people who can’t get the
treatment they need on the NHS which needless to say is very unfare. I wonder
how much we would save to spend on more important treatments if we cut the
things you list.
As for care for the elderly. What a national disgrace the
way we treat our elders but when you reduce people to economic units thats
what happens.

I think we have to stop thinking of N.I as a ‘savings pot’, we all put in
for the wider community, each of us entitled to take some out as and when we
need to.
The problem arrises when not enough goes in, or if we think that
not enough is going in, people get angry about who has taken more than they’ve
payed in etc, etc.
There are a lot of poor buggers who die before they’ve
taken anything at all, but that’s not why we contribute, and there’s the
rub.

The problem is who defines needs as opposed to wants?

I would define a lot of NHS activities as luxuries that should be paid
for. Others would claim they are needs.

I object to money being “wasted” on conception, tatoos, sex change, fit
and well family members staying in hospital to be near their loved ones,
chapels, prayer rooms, and many other things. To me the function of the NHS
is to keep you alive, fit and out of pain and nothing else.

Charities provide much of the accommodation for relatives of the
sick.

As regards Ian and Duncan Smith’s statement; ” The truth is deferment of
one year will add one per cent to GDP (national output) and it will add up to
ten per cent on your pension pot,” the real truth is that one year’s deferment
of pension, voluntarily undertaken by the entitled person, adds ten percent to
your pension pot. But if, as he plans, you don’t become entitled until you’re
68, that means that if you elect to defer claiming your pension for the extra
10%, you’re going to be 69 before you get it. Not quite the message he wanted
us to think we heard, is it? And then there’s that infamous “up to” hidden
away in there. And in any case, for those of us who have not reached high rank
in our careers, how many will still have a job at 60, let alone 68?

There is no national insurance pot.

It was always a Ponzi scheme, along with so many Government schemes such as
pensions. This is why politicians are so keen to encourage immigration. The
whole system collapses if there are not enough people working to pay for the
upkeep of the sick and old.

The health service costs are directly linked to old, and young, age.

The NHS spending on those who contribute is peanuts compared to that spent
on the old. This is why rising life expectancy is such a funding problem. NI
was set up on the basis that we would all kick the bucket by 70 and not
actually cost too much.

Things look, and feel ,bleak.
On a slightly different tack, one goal I
had in life was never to retire as such (I’d be so bored) but find an
occupation which made me happy. One of the great definitions of wealth is not
the amount of money you accumulate, but to be paid for what you love to
do.
However, I feel there may have been a certain naivety in this
view.
Gildas the Monk

How about a different definition Gildas – ‘to be able to afford to do
what you enjoy’.

Yes, Anna, I agree.
Or having “enough”, without worry. Enough is a
personal thing
THEN doing what what brings you joy, whether it’s “work”
or fishing.
Gildas the Monk