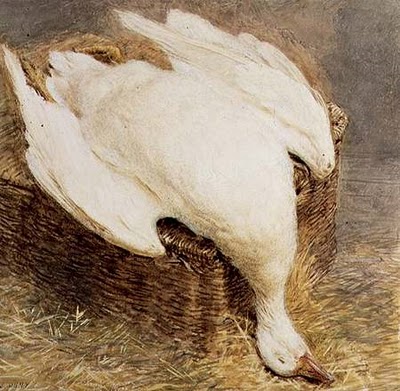 BEND, Ore. (AP) – A memorial service is planned to mourn the 109 Canada geese euthanized to keep the birds from overrunning parks in an Oregon city.

The service will be held Thursday evening at the Galveston Bridge in Bend’s Drake Park.

Foster Fell, who had urged the Parks & Recreation District not to kill the geese, says he hopes the event will help people console each other.

Growing numbers of geese have caused problems for years. Last year, the district spent $22,000 on cleaning up damage they caused.

District Board Chairman Scott Wallace says it is unfortunate the parks can’t support all the geese.

In the days when I really was aviating, I heard many a tale of the ghastly
things smashing windscreens and then virtually exploding in the primate cage
at the pointy end of the flying machine. This was never considered a ‘good
thing’ by fellow pilots. It may even be the reason why some aircraft have
vanished without trace. I have never experienced an impact with anything as
large as a Canada goose, but have had a number of bird strikes whilst low
level at speed. Once I flew into a flock of starling sized birds that had been
startled by the passage of the aircraft in front of mine. They sprang into the
air from the woods where they had been feeding and suddenly everything went
dark as they splattered the windscreen with a dark purple stain. They had been
feeding on berries. I had to pull up to gain altitude. Feathers and undigested
stomach contents adhere to a windscreen like Ooh smelly to a blanket and I
could hardly see forward. Fortunately not too many went into the intakes and
so the engine continued operating. Not everyone has been so lucky in that
situation.

Euthenized ? Is that a proper word? How odd, and somewhat
sinister.
Recently the rather robust blogger “Grumpy Old Twat” posted on
the primary school in Cornwall which has stopped using it’s government funded
wind turbine because gulls were getting chopped up in it. Might upset the
kiddies. So, leaving aside the green issues,

Apostrophe abuse! Now that really is a sin.
Cooler – 30
days.
Gildas the Penitent

I have visited your gaff near me. Very interesting.

With a little bit of patience [slow-cooking] practically everything can be
made eatable or even good. Try garden herbs like rosemary, thymian, sage, etc.
Orange is a misunderstanding I think, though.

And it’s true, they are a pest. That’s what you get when there too many of
them, any sort of them …

Put one Canada Goose into the oven, bake slowly for 2hours per pound.

Then throw the bloody thing away. You’d be better off eating rubber
bands.

I wonder if the brethren/ganderene will organise a fly past during the
service?

If you cook them for two hours per pound, they will be.

Well, perhaps 2 hours per pound was over egging the custard but my
point was that no matter what you do with them, you’ll find them pretty
much uneatable….I don’t mean inedible, I mean uneatable.

No use for fat or grease? Goose fat is very good for roastie
potatoes, but I fear that like Anna’s posts on sex and the state, i am
moving into waters I do not understand!
G the M

My dad remembers having a goose for X’mas during the war.

There was so much grease it spilt over the lip of the roasting tin,
out of the oven and all over the kitchen floor.

A culinary adventure not repeated since 1943.

Though a committed non-golfer, I recently found myself on an East Anglian
golf course where dozens of canada geese were grazing happily on the manicured
fairway.

The Lady Golfers – as I believe you have to call them – all cued up on the
first tee and merrily drove their balls at high speed straight into the middle
of the flock, ignoring the flapping wings and honks of distress.

It seems that years of trying to putt through a maze of goose-shit will
harden even the tenderest of hearts.

I think a memorial service is a great idea! You bring the charcoal, I’ll
bring the orange sauce.

“euthanized” – Is this the new approved way of killing pests?
Call them
game and you could just shoot the buggers.
Are Canada Geese worth eating?
There’s loads of the shit-machines round our way.

Has anyone else ever been bitten by a Hedgehog flea?
Not funny, and
they don’t just bite you once.

As Moyra Bremner says in ‘enquire within’, they can’t live on humans
but it’s very unpleasant until they find out.

Looking at the positive side, all the bleeding-hearts will be safely hidden
indoors during the service, allowing everyone else to get on with killing the
infernal pests.

Canada Geese are the scourge of the area where I live. They are overtaking
the indigenous ones, such as greylags. Coming over here, eating our grass
…

Incidentally, on Canada Goose consumes 7lb of grass per day and produces
5lb of gooseshit. Imagine.

Well, Saul, thanks to the wonder of the world wide webbed, you can!

On the old web cam eh?

That’s cooked your goose with the animal rights brigade……