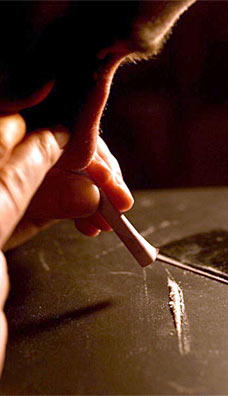 Gett off (your face)

A legal acquaintance and I were discussing drugs the other day. He is a bit of a lad in this respect, someone who indulges in the occasional line as well as the occasional joint.

He is, to all intents and purposes, an upstanding and well-adjusted member of society, erudite and good company. He does drugs when he can get some “good stuff”. He doesn’t do drugs when he can’t. I have also met some drug users who I considered to be on their way to a downward spiral. And I’ve seen the shaking, gaunt, pale addicts who would probably find death a blessed relief from their tortured existence.

So, like many other things in life, drugs can be a good thing for those who can handle them and a terrible burden for those who can’t. But the same can be said of drink, and I’m sure I’m not the only one here who enjoys a glass of wine from time to time, am I?

At this point, it’s entirely expected to hear the cry: “Ah, but drugs are illegal!” Well, they never used to be. You used to be able to buy it from a pharmacist. And drink was made illegal in the USA and merely succeeded in making 90% of the population criminals. It did absolutely nothing to stop people drinking.

So, even though I have no interest in drugs, having never even puffed on a joint (although I did come close once, but the young lady who was smoking it wouldn’t share it with me!) I firmly believe that it is no business of the government to tell people what they can do to themselves.

As a consequence, I was interested to discover an organisation that professed to have a way to legalise drugs in a way that everybody would win.

I have a suggestion for this myself: the government should fully decriminalise drugs and tax them at the same sort of rate as cigarettes* (although I’d lower the tax on cigarettes to reflect the new income source.) This kind of taxation is known as a “Pigou Tax”, where the thing being taxed has an externality, or external effect that is not just upon the user. So, drugs can lead to crime or addiction which requires either treatment or some other handling, so users of drugs should be taxed to pay for these side effects.

However, this is apparently not acceptable to the “Transform Drug Policy” Forum. Ostensibly a pragmatic and sensible way of convincing the government to do what I have suggested, it is in fact another thinly-veiled group of puritan, arrogant bullies and prodnoses who are, in fact, suggesting nothing more than legalising drugs so that the process of “social denormalisation” can be used on drugs to make them socially unacceptable, as this is, in their opinion, the best way of dealing with the “awful consequences” of drug use.

Soon, we will all “live” beige lives, existing on seeds and nuts and drinking only water, upon pain of being accused of having a good time.

These people all depend on having some moral high ground, which is why we are constantly drip fed a steady diet of the awful consequences of drugs and the “successes” of the drug war. But the truth of the matter is that we can’t win the drugs war. And even if we could win it, we shouldn’t be fighting it.

The state has no business telling you what you can and can’t do with your own body in the privacy of your own home. And unelected, sanctimonious puritans like the Transform Drug Policy Forum have no business either.

*Cigarettes are a classic example of a Pigou Tax taken too far, which is why the NHS moans about smoking costing them £5 billion per annum, but the puritans never mention the £10.5 billion raised from cigarette taxes every year. Cigarette smokers are a nett contributor to the NHS, and we should be grateful for their habit, not vilify them for it. The fact that our high tobacco prices justify another illegal trade of smuggling cigarettes, even from other EU countries, just shows that these taxes are too high.

I see nothing here about the relationship between the pointless

Maybe they are trying to protect a burgeoning cottage industry much
closer to home.

Thank you for the link, Saul.  Whilst it must be of benefit to any
country to produce her own opium

Pericles, you are not alone in suggesting that buying the Afghan
opium crop might have advantages.

I was not trying to claim it as an original idea,
Thaddeus ;  the shortage of morphia was drawn to my
attention some time ago by a practising doctor.

Anna
I am divided on this one (perennial fence sitters of the world
unite! But not too much!). On the one hand, let

Seems I am attracting some ire! However, debate is a good thing. I do not
dispute your point, Jeremy. Indeed, I think I pointed out that a huge amount
of “petty” crime (not so petty if you are on the receiving end – I know) and
indeed violent mugging etc is caused by people seeking the money to buy
drugs – presumably which wold be cheaper if legal and on open sale. I freely
acknowledge the problems caused by prohibition – and indeed the fact that
prohibition is the surest way to promote organised crime which feeds off and
to a degree perpetuates the problem. I see that side of the argument. And I
have no wish to interfere with your perfectly sensible, reasonable and
entirely harmless use of fungi – I wish you well. I don’t see why the state
should have any reason to interfere with your liberty at all.
My only
point is – is it quite as simple as that? Something within – that nagging,
unintellectual instinct thing – is just saying no, not that straightforward.
Not that you or anyone else here is are wrong, but that
there may be more
to it than that. Perhaps that the law of unintended consequences might
apply.
I merely pose this one question which occurred to me. OK, legalise
all drugs. All? What about crack cocaine. I suppose that cocaine will be
legal (fine by me ), but what exactly are the rules of the game? How does
that work?
Frankly, having “not inhaled” the odd spliff in my youth I
have no axe to grind, but I am concerned that the potency of some drugs is
so bad that there could be potential problems.
So I shall remain on the
fence, willing to be persuaded and informed!
Gildas the Monk

Ps Legalisation of much of drug use could also help in other ways.
Presumably, we would be buying up the poppy crop in Afghanistan, making us
much more popular, and putting a big dent in certain hostile elements’
revenue. As I say, there are pros and cons
G the M

Drugs are already dirt cheap. The drug-related violence and crime comes
about because the feckless who are addicted to them refuse to work and
more often than not are unemployable anyway. They mug and steal and hurt
because it’s the easy way

When I lived in the Netherlands I recall police guiding football fans away
from the bars in the center of town, and down the street where they would have
to pass the hash cafe. Drunken fans are more violent than doped up, mellowed
out fans, and it seemed clear which the police preferred.

If better quality and cheaper drugs are legally available these provide
(contrive?) a motive to avoid serious crime as that might cause loss of
access. At present I understand it is as easy to access illegal drugs in
prison as on the street; so by making street-legal drugs more attractive
prison does become somewhat unpleasant in comparison.

Anna
I am very dubious about the the money numbers bandied about on the
smoking issue.

Tom, I agree entirely that the costs to the NHS are entirely
over-inflated and without much grounding. But the principle remains that
smokers pay much more into the NHS (somewhere between 2 and 10 times) than
what they cost the NHS.

I just didn’t want to get bogged down in a debate about “well, the
official figures say something different, and can’t you google stuff?”

Anna
I am divided on this one (perennial fence sitters of the world
unite! But not too much!). On the one hand, let’s be clear (as I am sure you
are) on the terrible damage that drugs of all forms cause.
Could it really
be OK to hand over to some 18 year old a packet of heroin or the Lord knows
what for the price of a bottle of Famous Grouse, or whatever?
And suppose
one did legalise stuff like weed or whatever the stuff is called. There does
seem to be a terrible compulsion amongst some users to seek out ever more
potent forms of whatever the drug is – so even if HMG markets it’s own brand
whaccy baccy, one might imagine that stronger rival products might emerge in a
new black market. And it may have been OK for Sherlock Holmes to chase the
dragon occasionally before deconstructing the seemingly impossible, but I
really wonder if one left the defeated underclasses populating the sink
estates that make up so much of the land to themselves with 10 packs of
Bolivian marching powder what the results would be. Patronising and
paternalist? Maybe, but maybe just true.
On the other, there are the well
rehearsed and valid arguments that broadly legalising will undercut the drug
barons, suppliers and brokers who make the profit. It is a well recognised
fact that feeding drug habits accounts for huge proportion of crime in the UK
– estimates vary, but may be 50% of petty theft and a significant proportion
of street crime. Prohibition merely criminalises a significant proportion of
the population. Including, possibly, yours truly (although it’s the altar wine
that’s my great sin).
Whither then?
Well, in my experience waging a war
on something tends to produce the reverse of the desired result. Perhaps a New
Age aphorism, or perhaps a Jungian insight expressed by the psychological rule
that “what you resist, persists”.
Perhaps the choice is between a real
de-criminalisation and general amnesty, and a real 100% war with flogging and
executions etc – not the half way house we have at the moment. The latter
being, I would imagine, unlikely.
Ok, who’s gonna join me on the
fence?!
Gildas the Monk

Anna,
Although I am not familiar with the prices of the various
stuff, I see the force of the argument.
But will a wholesale
de-criminalisation assist? Will it only make a bad problem worse? My point
is I see arguments both ways.
Does this make me a paternalist? Or
merely cautious?
Hence I shall remain up on the fence!
Gildas the
Mink

Get off the fence. Go and find out the facts. Read. Think.

The fact the all illegal drugs are freely available and dirt cheap
might give some an insight into why this ‘legalise and tax’ scheme will
not work.

Drug related crime comes about because drug users become unemployable,
violent and anti-social, and THEN they are unable to afford their habit.
The Pigou tax would have to be so high to cover related costs that street
dealers would not be affected.

In general, if a person wants to take drugs, well I guess that is up to
them; but we live in a society, whether we like it or not. What my
neighbours do affects me, and vice versa. Letting people become violently
unpredictable, murderous even, just so their ‘rights’ have not been
infringed, is madness.

Drugs are garbage, and most people who take them suffer in one way or
another, and not a small amount die. Why promote this stuff?

You might want to think about that one. Try a trip to A and E on a
Friday or Saturday night.