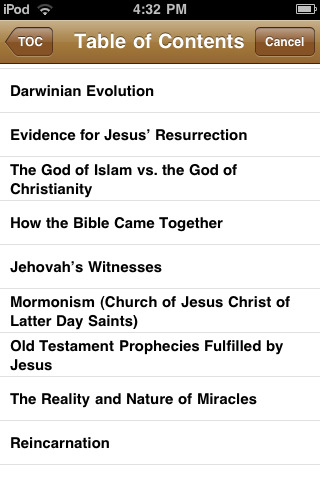 Faith floundering? At a loss to explain the miracle of the five little fishes? The Apple store has it covered. Now you can whip out your iPhone and call up a winning argument.

A mere 99c from ‘Lifeway  Christian Resources’ it saves all the hassle of reading the bible and understanding Christian theology.

Of course your opponent may have bought the iBibleThumper, the app for Atheists, which claims to give you instant quotes showing just how irrational and inconsistent the Bible is…

Reviewers of the product claim that is ‘is annoying’ having to ‘shake your iPhone’ each time you want to produce another table thumping winning argument.

Possibly not as annoying as having to research the subject in depth in an old fashioned library before engaging in the argument.

The iGod app for the iPhone generation that wants its religion on iTap iNstantly. Somehow the vision of iPhones being shaken at one another doesn’t quite capture the romance of the Holy wars.

Shut up Kevin, no one likes you.

The whole thing is similar to some of the comments and ‘arguments’ made by
numerous blog commentators; Wiki a subject you know absolutely nothing about
and pretend to be an expert. People constantly asking for links, as if the
existence of a sentence on a web-page is evidence of its validity.

Agreed, English! The subject of Anna’s article here sums up the crass and
vulgar ‘Christian’ marketing that I find so detestable; Christianity is a
revealed faith (ie not merely down to simply accepting theological
propositions and signing into some kind of exclusive club or culture). There
are myriads of people in cyberspace who are more than willing to air their
appalling ignorance on the matter – quite aggressively at times – and enjoy
baiting ill-informed Christians with their sophistry (sigh..).

Will the Pope be giving out free samples during his visit?

Please leave the Pope alone… he’s having a very stressful time of it at
the moment.

And besides, I’m planning to mug him when he steps foot on our soil.

Perhaps you could eventually cut out the middlemen and hook up the two
iPhones to sort out the argument by themselves.

It’s a shame that this may deprive my atheist son of his favourite sport –
arguing with Christians on the internet. I’m not sure I approve, but it has
done wonders for his knowledge of theology.