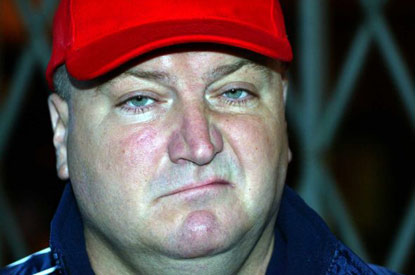 The foul mouthed Bob Crow believes that the recession has ‘made everybody more left wing’.

“People started saying ‘how can bankers earn that kind of money when agency nurses are on £6.35 an hour?’.”

He may be right; many of his own members will be stunned to see just how much of the money forcibly taken from them in a stunning example of “fiscal fascism” actually ends up in Crowbar’s pocket.

“At the end of the day you are a worker or you are an employer.”

There is of course a third way – you become a trade union leader – neither productive worker nor enabling employer, merely a leech on the real workers.

What’s the libertarian take on everyone who participates in an end-to-end
contract knowing the end-to-end sums involved?

Well, as long as all parties believe the contract is to their benefit,
then there’s no requirement for everyone to be honest about how much
they’re making.

I’m not really sure why an agency’s profit margin is anyone’s concern
but the agency’s. Although I suppose there could be contracted percentages
or something, but that’s an odd way to write a contract.

I surely didn’t phrase my last question very well, though it might
not make much, if any, difference.

There seems to be something vaguely familiar about the names of the unions
on your list. Remind me again, what industry do they represent?

All men are equal, but some are more equal than others, Mr. Crow

What really annoys me is the “union modernisation fund”, paid from the DfID
budget (i.e. taxes), which supports the high pay of these parasites.

Hmmm. That nice Mr Clegg is hoping people will use the website to tell
him what needs to be done to improve things. Lets hope sufficient numbers
mention the union modernisation fund is anathema to them.

He actually has a valid point, believe it or not.

Recession/depression and socialism go hand in hand – and not just in the
causal way that right-wing blog operators tend to assume.

Socialism and recessions go together in the have your cake and eat it
way.

Socialists cock up the economy and get voted out.
Socialists then
agitate against a non-socialist Government.
The peeps manning the
barricades oppose the ‘government’ without noticing (or perhaps without
caring) that the ‘government’ that put them on the barricades is now stood
by their side.

It is the nature of socialism that a tiny minority get to exercise
authority over someone, whether socialism is on the way up or on the
way down.

What an aspiration it is to become a trade union leader like Bob Crow. It’s
an idyllic existence – furthering the cause of socialism, inspiring the
workers to take up the class struggle with some firebrand rhetoric – and
drawing a sizeable salary, comfortable in the knowledge that some poor sods
were huddling around a brazier and risking their livelihoods on bugger all pay
– except perhaps a meagre handout from the Union. It’s a bit like being a
regional Party boss in Soviet Russia. People like Bob have a great future in
the emerging communitarian civic society. Practice the forelock-tugging,
people – you’re going to need it.

That’s the picture that Waddy copied.