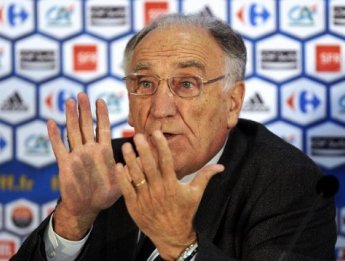 Jean-Pierre Escalettes, the French Football Federation president, has just resigned in shame after the French team’s dismal performance both on and off the pitch during the 2010 World Cup.

France crashed out of the tournament with just one point and one goal.

Will we see a similar gesture from Prince William, now president of the English Football Association?

Fabio Capello shouldn’t need to resign. The actual people who failed to do
their job should resign. That’s the players. A manager can only do so much. If
a team don’t work as a team then unless the manager has remote control over
the players there is little he can do.

The reason the players didn’t do their job is because they are generally
third rate footballers. A few good people don’t make a team. We have third
rate players because the only really good players in our league teams are
foriegn players.

But I know nothing because I hate football.

I don’t think it would be a bad idea if the players were sent off for a
quiet little lie down for half an hour every time they rolled about on the
ground pretending to have a broken toenail. I think they’d soon stop the
shin-clutching if they were sent off for being babies.

What a good idea.

But I’m sure it would be spun as “political interference” and all the
brainless metro-numpties on the left would be up in arms about it. So they’ll
all be there for ever – no honour, so no resignations.

Escalettes sounds like it should translate as something like “little jumps”
– those ball-control movements that outwit the opponent.

I imagine William knows as much about football as Charles knows about – ooh
– everything rational and scientific, i.e., nothing. But why should he resign
– we need harmless incompetents at the top, it’s a fine long-standing British
tradition?