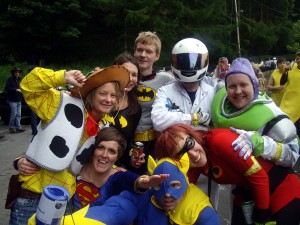 An interesting week culminates with me resigning from my former place of work, and starting a new practice on Tuesday next. Generally stressful and difficult, so we shall park that. Basta Adesso. Enough already.

Somewhat battered, and a tad distressed, I retreat to my cell in the little town on the side of the Pennines. It’s a beautiful evening for a change, which is good, because it’s the Saddleworth Band Contest. Saddleworth being a pleasant area tucked away on the Lancashire/Yorkshire border.

All the famous names – Brighouse and Rastrick, Black Dyke, Stalybridge Old Band – march around the various hamlets and play, principally at the village pubs, where the good burghers of Saddleworth gather to listen, drink and eat like happy little hobbits. Pies peas and an altogether more appealing form of burger are in much supply, and even though I have no interest in brass band music as such it is hard not to be drawn in by the magnificent sound, and the sense of an England which those living in the Metropolitan Political Bubble would not recognise, like or understand.

The joyous theme continues on the Saturday morning with the infamous Saddleworth Beer Walk. The idea is simple. An eleven mile walk in a circuit around the villages and hamlets of Saddleworth with 10 different stops, a can of strong ale being administered at each one, all hopefully in the name of raising money for charity. Fancy dress is not obligatory, but is de rigeur. There is a prize for the best dressed team. About 2,500 take part, although how many complete course is another matter.

My brother is a very enthusiastic participant. Rightly so; he is raising money for cancer research, and he is a cancer survivor. I am roped in to help. This year, thanks to events in Iceland his team has decided to go with a “volcanic ash” theme – “Air Volcano”. He has created a sort of airline drinks trolley which can be trundled around for the purposes of…well, dispensing drinks, but he has also wired it up with a loud speaker and an Ipod thing (whatever that is) so that it can blast out airline themed tunes (I’m Mandy, Fly Me, anything by Buddy Holly). I have to help him move the trolley because I have an estate car.

The day dawns inauspiciously because it is raining. Undeterred, I make my way to my brother’s house to pick up the trolley. It is quite substantial and impressive. He has put a lot of work into it. He is dressed as an airline pilot – hat, sunglasses, and jacket with gold braid. His daughter, my niece, is dressed as Supergirl. She is 18.

We take the trolley to Bill’s house at about 11.30. Bill is my brother’s gargoyle like mate. Bill and the rest of the male team members are there. We now have a couple of extra pilots and various camp stewards. They are rehearsing some silly songs and chants in the garden. It is still raining and they are gathered under an awning. My brother tries out the sound system but there is a glitch with the Ipod and it won’t play. Perhaps it has got wet. Then it does play, all too loudly for my liking. It seems everyone else, including my niece, has started drinking bottled beer already. I do not drink during the day (it makes me feel sick) although I do consume too much altar wine at night, sometimes. I am driving anyway. I stick to coffee. There is the smell of chilli in the air as Mrs Bill prepares the post walk party food.

My brother is a chocolate Labrador to my slinking junkyard mongrel, and he bounds around organising and disorganising people’s costumes. I slink in corners. The damn trolley is making way too much noise for my liking. I find I am standing next to my niece.

“I know. And he’s so….embarrassing.” She sighs, wearily.

We share a laugh. I like my niece. She reminds me of being 18. I think she likes me.

She retires to the shelter of a porch with a girlfriend where I overhear them talking in hushed tones about who has been doing something to someone at a party, and they start giggling.

The girls arrive. The WAGS, as it were. They have got themselves orange “trolley dolly” outfits. I approve of this, although we not exactly in Footballers’ Wives territory as such. However, they are sporting name tags such as Chardonnay and Tia Maria, and again I feel they should be commended for effort. They even have little wheelie bags.

Inevitably discussion turns to the so called “Mil High Club”, and my niece joins in. I sternly point out to her and everyone else that she is much too young to hear such matters. I am very protective of my niece, in the way that only a reprobate can be. However, judging from the Supergirl outfit, I fear I may be being unrealistic.

After “rehearsals” it’s time to away. We load up the trolley again. Off to the playing fields for registration and the start at 1.00 pm. As we get near our destination, strange sights begin to appear. First there are some young men in dressing gowns. It is not entirely clear if they are wearing anything underneath. There is, it has to be said, a very leggy “St Trinians” schoolgirl walking down the road. Things are looking up.

We arrive at the playing fields. I am now surrounded by a host of assorted pirates (too many of these, I think), hobbits and wizards, vikings, romans convicts, monks, the occasional nun, cowboys and more. There is a rather sinister group of young men dressed in what I believe are called “morph suites”. They look like a troop of giant condoms. There are a number of cheerleaders and caveman. A Lara Croft is attracting a lot of attention, because even though she appears to be about 17 she is plainly very well qualified for the role.

My brother’s team assembles to general applause, especially from a group of nearby pirates, who momentarily cease their plastic swordfight. The trolley goes down well. The girls have brought wine and it looks quite well stocked. However, there is obviously serious competition for the best team from the guys with the life size foam rubber reconstruction of Lady Penelope’s car from Thunderbirds. There is more general drinking and milling about. It’s that amateurish, jolly, shambolic, innocent stuff that the English do so well. It has even stopped raining.

I decide that I might as well have some fun and watch the event. I retire to await the passage of the throng at a pub on the route, just before the third beer stop for the walkers. I have a bad pasty from shop and sit outside, drinking more coffee.  The pub is in a village square and higher up than the road, so I shall have a good view. It is drizzling again now, and I am getting wet and cold. Ultimately the first signs of the horde are seen – some convicts and Victorian Bathing Beauties (male and female but all dressed alike), albeit from the wrong direction. The Victorian Bathing Beauties do not appear to be dedicated to completing the walk, and join me in the little flagstone garden to watch the parade.

At about 2.30 shouts, cheering and hooters presage the coming of the horde. Some mock soldiers appear. Two gentlemen with face masks and rubber penises, proclaiming themselves to be Jeremy Clarkson and Richard Hammond. Alice in Wonderland characters (well done, Queen of Hearts). Money is collected in buckets. Some teenage girls in sort of fairy outfits do particularly well at this.

The trickle of revellers becomes a flood. I meet up with Big Brother and help push the trolley for a bit. The team put on a sort of display of pre-flight safety checks. There is a hubbub of shouting, cheering and talking from the river of people, and some are clearly the worse for wear already. I imagine that the First Crusade must have been like this.

I mill about too, people watching, and at one point nearly bump –accidentally- into Lara Croft. Goodness me!

I enjoy the rare treat of a hot dog, and leave them to it. I award some mental prizes. I think the best costume goes to the man dressed as 10 Downing Street, from the “Well Hung Parliament” team (very droll). A runner up was maybe the guy dressed as a papier mache volcano, replete with “joss sticks” in his hat. Well done the Queen of Hearts and my brother’s team also deserves a mention. A prize for most energetic team should go to the Zebras (well how else to describe a team dressed as Zebras) for a sort of impromptu group break dance.

I wend my way home, feeling a little sad. I have lost my heart to one of the Victorian Bathing Beauties. An Irish girl with a dazzling smile, gay laugh and a natty mop hat. Of course, I shall never see her again. Ah well, life.

It sounds like a lovely day out Gildas! Don’t forget to mention it in good
time for next year, since I have just the outfit if you feel the gathered
throng is lacking a hippo in pink gingham who looks like Dolly Parton at
chest-level and Hattie Jacques everywhere else! I could get the coach up there
and wheeze along at the back. If you’re desperate, like.

Does this mean I’ll have to get the “Mummys little cowboy” outfit
out.

Gildas, methinks thou dost protest too much. Another excellent saga. Thank
you!

Dear Daedalus
Thank you.
Our “Lions” were not in appearance, but have
not escaped my attention.
In the firm belief that one should make sure that
one’s comments are of an appropriate tone for the blog in question (and here
the blog is elegant and analytical as well as charming) my comments on this
topic have been reserved to the “Grumpy Old Twat” blog – where the tone can be
a little more…well, basic. My observations have attracted some attention, not
least my description of England as “running around like a bunch of council
estate hoodlums running from the rozzers”, and I feel I may have been a bit
harsh on the issue of WAGS and spray tan. There was a bit more, but I do feel
this is not the proper forum to rehearse them.
Oh dear! I like Fabio, but
why oh why couldn’t Gerrard play in the centre!
I shall pray for his soul
tonight.
Gildas the Sad

By the way, we appear to have misplaced a national football team. It hasn’t
been seen for about three weeks. They answer to the name of “Ingerland”, wear
white and red kit and will frantically run away from any football in their
vicinity. They have an Italian minder who can’t speak English.

I don’t suppose they were on this beer walk thing of yours were they?

A string tale. Cheered me up after this afternoon’s debacle.

Thank you Thaddeus and thank you Anna for posting.
It would be even
better if I could spell. String ale?
Gildas the Monk

Whoops! MIssed that one – now dealt with, sorry Gildas.

What a lovely tale!

Anna, I fear you have competition in the storytelling department…

Yes, a new Troubadour for Sundays…..