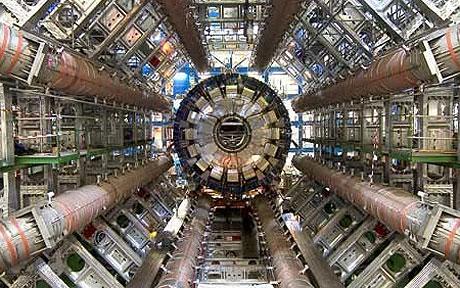 Over at the Hadron Collider – haven’t heard of that for a while have we? – they are still playing ‘let’s find God’, shooting beams of proton particles 27 miles under the Swiss mountains in the hope of producing the ‘Higgs Boson’ particle.

The Higgs Boson particle is the so called ‘God particle’, the one that will give us an insight into the formation of the universe and help us to know ‘God’s intention’ according to Nobel laureate Leon Lederman.

Some of the scientists involved in the experiment were sitting around in a Brixton Disco, as one does, and came up with the idea of taking a further step, and turning the resultant data into sound……

And if they do manage to capture ‘God’s voice’ on tape? What will we hear?

Mr G thinks it will be indistinguishable from Obnoxio with a particularly virulent hangover….

I incline towards the dulcet tones of Ms Smudd whispering ‘I was only joking, honestly’…..

‘Obviously he would be a Catholic virus. None of your wishy-washy C of E
stuff.’

Has to be a Jesuit virus. Incurable. And very tall.

I thought Douglas Adams documented this, She said,’We apologise for the
inconvenience…’

Well here’s a thought… not saying I believe it, just putting it
forward.

The REAL denizens of this universe are the viruses and the bacteria, which
seem to have lived in suspension for millions of light years in space, until
they hit somewhere, like Earth, where they could become CELLS and organise
themselves into colonies, called plants and animals, and grow increasingly
more complex (called evolution, an on-going process.) Though they would never
be allowed to do this in Texas.

So if GOD made anything in his/her/its own image, that might make GOD a
virus/bacteria — the toughest form of life ever discovered. Obviously he would
be a Catholic virus. None of your wishy-washy C of E stuff.

I just made this up, but it has as much chance of being the truth as any
other theory.

Been there and done that and came to the conclusion that it is all a huge
joke.
What gives us the right to assume that we are anything other than an
accident of birth brought about by man’s inability to control himself with
whoever happens to be available at the time.

Meanwhile, I keep my options open.

My friend Richard Dawkins is very upset with you people. Very upset indeed!

Don’t you foolish mortals realise there is NO God? There is but one true
faith and that is Dawkinism, and there is only one being in the known universe
who can guide us towards our ultimate goal of belieflessnes: our great seer
and leader Richard Dawkins.

And as for those so-called scientists! They have the blasphemous audacity
to contaminate pure science with primitive religious expressions like “God’s
Particle”! Disgraceful, they deserve to have their grants and memberships to
Brixton garage discos withdrawn.

The great wrath of our almighty Dawkins shall be brought down on them in
all its terrible majesty. Why do you think the Hadron Collider (large) has
been beset by so many “accidents”? Some unbelievers say these were
statistically random, but inevitable, mishaps that such a large project has to
endure.

Well, the Mission of Anthropological Dawkinism, Oxford branch (MADO) has
commissioned a team of the brightest Oxford mathematicians to prove that these
“accidents” were attributable to the high energy god-belief thought rays
emanating from some subversive CERN physicists who secretly attend church
services.

Please help stamp out extreme, bigoted, primitive belief systems. Support
Our Richard in destroying all of these evil religions by hitting all
christians on the head with one of Richard’s theological books.

Please also donate to our sister causes:
– Man-Made
Climate Change, the worthy belief system that requires no
proof
– Encouragement of Islam, the promotion of the
Religion of Peace by the amalgamated union of firework makers of Bradford

If you have any questions then please consult the following works which
were recommended by Dawkins’ friend, Douglas Adams:

Whatever happened to the Small Hadron Collider?

Or is it only large Hedrons that will be collided?

FT’s comments suggest he missed the satire in John Ward’s piece! (No FT, no
comment?)
The Haddock Collider may also discover that She (why is God
always a “He”?) smells of fish.
More seriously, recent hypotheses suggest
the whole sub-atomic theory of life, the universe et al is barking – it’s
quite likely the LHC findings will cause a major “readjustment” (i.e.,
bollocks to strings, Higgs and most of the other mathematical tweaks without
which the complex theory falls apart).

Always bound to set people off, this one. There was a recent article in
which a respected scientist (forgive my lack of research, but I’m hung over
from a session on the previously mis-spelt “alter” wine) argued, or rather
postulated, that mankind would never be able to truly understand the nature of
the universe (and I shall assume by an extension of reasoning, God, although I
use the word very loosely, let’s just assume any fundamental infinite creative
source of all being and energy, that sort of thingy) because, frankly, we are
not clever enough. Put rather less crudely, we are finite creatures dealing
with concepts which to all intents and purposes involve the infinite. Or as he
put it, we will no more understand the nature of the universe than a fish,
swimming in the ocean, can understand the concept of gravity or could envisage
or appreciate the beauty of a sunset. Perhaps. However, speaking from my
monastic cell, my only other observation is that if one did want to hear the
sound of God, then rather than built a tunnel under Switzerland, one might
simply meditate upon silence. Silence may be a horrid thing, empty and sad –
hence, as we say, the silence of the grave. However, it may also be a peaceful
thing, in which the mind finds peace, and sometimes an infinite river of
ideas. An infinite river of ideas. Now, there’s an interesting definition of
God, brothers and sisters. Wonder where that came from?
Gildas the Monk

Ask a million people, get a million different answers…

Me, I think that probably if there IS a God, he doesn’t believe in US. And
all you guys are mere figments of MY imagination, and so am I, so I don’t
exist either.

So what would God sound like? Paul Simon said it best… The Sound of
Silence.

Well. He is actually called “Mohamed”, but it’s all the same crap.

Go directly to a Sudanese jail. Do not pass go. Do not collect

God speaks directly to his people, as many, many millions of us can attest,
XX

Shite. REALLY? There are THAT many schizo paranoids out there?

If I said my teddy bear demanded I kill you, you would call me a fucking
nutter.

Well I GOT you on that one boyo. My Teddy bear is called “GOD”.

So sort THAT one out.

God speaks directly to his people, as many, many millions of us can attest,
and not through physical particles.

He has made his intention clear, but has designed the universe for us (and
any others “out there”) to explore and learn about, so there is no problem
with that.

All exploration of the universe, in any direction (telescopic, microscopic,
or any other) helps us understand why it exists at all and why in this
particular form with the rules and physics and all that. However, the
article’s way of wording this quest is rather pretentious and somewhat
nonsensical.

Never mind: hopefully they’ll learn more about the real God anyway, though
no doubt in an unexpected fashion (he does that sometimes!) and it’s
interesting scientifically even without the spin (pun intended)…