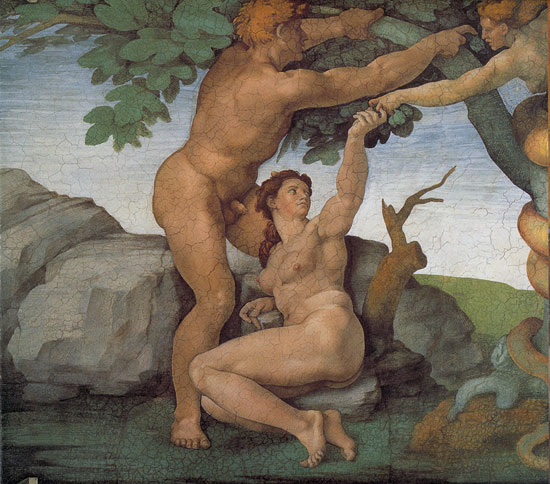 In the beginning there was Adam and Eve and a big rock.

Adam was much stronger than Eve. He could lift the big rock and drop it on her head. He didn’t need to threaten to do so, but Eve knew, and accepted the implied threat to her life. Adam held the power. A lot of Feminist mythology is built around this point.

Adam and Eve had many children. The children couldn’t lift the rock either. They too accepted that Adam held the power. A lot of Child Abuse mythology is built around this point.

The Children grew up, the daughters married men who were fit and strong – it has never been explained to my satisfaction who these men were or how they came to ‘be’. The sons too, grew tall and strong, and married women who grumbled and moaned that Adam held all the power. There were now several men who could lift the big rock. It was declared that the strongest of them all who could lift the big rock with the greatest ease should take possession of the big rock. A lot of Tribal Leadership mythology is built around this point.

They called him ‘King’. He rarely had to drop the big rock on anyone’s head, the knowledge that he could do so was sufficient to keep them all in line. A lot of Nuclear Deterrence mythology is built around this point.

However, some of the failed contestants in the rock lifting contest were quite intelligent. They figured out a way to share the power.

First up was the Witch-Doctor. He knew that from time to time, the King, being mortal, was struck with ailments. His arms became weak, and truth to tell, if he had had to lift the rock, he couldn’t have done so. The Witch-Doctor struck a deal with him; he would restore the strength to the King’s arms and sign an oath of confidentiality – no one would ever know – but in return he demanded that no one ever question his own secret rock-dropping powers. The King agreed.

Then stepped forward the Voodoo man. He told the King that one day the Witch-Doctors powers wouldn’t work and he would go to another land where there was an even bigger King with an even bigger rock. The Voodoo man struck a deal with the King; he would negotiate with the much, much bigger King not to drop the rock on his head if the King would agree to only drop the rock on anyone’s head in this world when the Voodoo man thought it was right to do so.

In truth, the King’s ownership of the big rock didn’t amount to much by now – between the Witch-Doctor and the Voodoo man, he was as much a slave as the people he ruled – who still believed that he had the right to rule because he alone held the magical powers of life and death inherent in the big rock.

Not a lot has changed over the centuries. We call the King the ‘Government’ today. The Witch-Doctor has dropped his Witch prefix and still goes about his business in secret. The Voodoo man fell in with some footballers wives and acquired a fancy new designer wardrobe, but he is still believed to be able to negotiate with the much, much, bigger King in the next world.

A new power emerged recently, we slaves. First we demanded the right to drop the rock on our own heads, now we are demanding that if we so desire, the Witch-Doctor should do so, on our command.

Lesser bit players have been admitted to the game. The army officer, forced to leave behind a wounded soldier, ‘knows’ of the painful fate awaiting him, and is allowed, nay exhorted, as an office and a gentleman, to drop a rock on his head. The Mother in difficult financial circumstances, ‘knowing’ of the impoverished life awaiting her child, is given the right to command the Doctor to drop said infant on its head. However, the Doctor is not allowed to ‘know’ of the painful death ahead for his patient.

These four continue to fight for power, but now they do so by proxy, in the media.

Which is why Dr Howard Martin is of such interest. Dr Martin recently stood trial for murder in respect of three patients that he was suspected of having indulged in a little rock dropping himself. He was cleared. Then the GMC had a dig around to see whether he had their permission to drop the rocks – they having long since awarded themselves such power. You see if they had said it was OK – that two or three other Witch-Doctors would have done the same thing – then it would have been. He was cleared.

At which point Dr Martin said – in effect – sod the lot of you – I hold the real power in this game. I decide when to drop a rock or not. Nowt to do with you lot.

The King – the Government – was appalled. ‘Oh No you don’t!’ he cried. I do. You only drop a rock when I order you to do so. The Voodoo man was otherwise occupied, it being Sunday now, and best frock day, but he will be chattering away to the media tomorrow.

In the meantime, the media have rolled Debbie Purdy into play – conveniently on wheels. ‘The Witch-Doctor should have the power, but only if I say so’ she says, tugging at our heart strings.

Subrosa has written an impassioned and eloquent defence of this particular Doctor – we should, we could, trust him. Nothing could prove the power and justification of blogging more than this personal account of what a good man he is. Unfortunately, there are many Doctors, some as mad as a box of frogs, and if the good Doctor Martin is held to hold the power, then so will they.

Matt Wardman has written an impassioned and eloquent account of the death of his own Father, and pleads that the King, and only the King, holds the power of rock smiting. It is more than worth reading.

These three accounts are all subjective accounts, pleading their own personal circumstances, they will add to the desire of the media to play the game as they are supposed to – by proxy, by subjective opinion, by emotive outpouring masquerading as intelligent debate.

Let no one miss the point, however, that what is really at stake here is our Subjection – that one of the original players gains control of the rock and thus the right to decide whether we live or die.

They will pull the rope this way and that, one side or another will make temporary advantages, but they will never accept that actually none of them should be in charge of the rock. It should lie where it falls.

That point has been lost in the mists of time.

We don’t live in as much of an educated society as we did several decades
ago. Nowadays we live in an indoctrinated society where people are no longer
encouraged to think for themselves.

“Is Vishnu ahead of Allah?”

Who cares, when neither conquered death and Hell. Only the Christ was fully
man and fully God, which is why He is our only intercessor with God and hence
the only possible Way of salvation.

One of the ‘successes’ of multi-culturalism, and one of the reasons for its
invention, is this very idea that all faiths are ‘equal’. It is encouraged, of
course, to destroy our heritage and values and factionalise society. It is the
Devil’s own work.

I find it increasingly absurd that in a supposedly educated society anyone
still thinks it is necessary to have an imaginary Sky Pixie to explain
anything at all. And in the midst of all our wonderful multi-culturalism,
where do the various Sky Pixies line up in order of power and precedent? Is
Vishnu ahead of Allah?

Speaking as a Creationist…

Adam and Eve’s children must have married each other. There would have been
no inherited diseases immediately after expulsion from Eden. Presumably, the
human genome has been deteriorating ever since, and eventually the Almighty
had to step in and issue the Law to Moses: no more marrying siblings.

You could argue that this genetic entropy is the cause of much of what we
see happening in the world today, such as effeminate males, masculine women,
ever-rising cancer rates, mental health problems and many other health
issues.

Or these things could be due more to social engineering and our misuse of
chemicals.

Opsimath claims there are “two quite distinct creation stories”. I have
never understood where this idea comes from. It seems to me that many people
have difficulty understanding literary constructions.

Just look around at the world today, especially what was once the civilised
West, and see how much control the devil has. He is working overtime because
time is short. Genesis is written in narrative style, which means it is meant
to be taken as fact.

That many people mock is due to their own lack of understanding in
spiritual, historical and scientific matters.

P.S. Anna, I still haven’t found that book I was looking for. It must be
here somewhere. I was hoping to get the new government to consider the
situation.

im lead to believe that if your birth is registered,then the government own
you(registration means ownership) so you cant drop rocks on someone elses
property

Oh no – the Freemen have arrived! No, registration means, guess what,
“registration”. Ownership means “ownership”.

Just because I have a list and I have the power of law to force you onto
that list, doesn’t mean I own you. The Govt doesn’t own taxpayers (although
they often act that way) or those on the various child protection approval
registers. It doesn’t even ‘own’ prisoners …

Incidentally: conveniently on wheels. You know you are going to burn
in hell for that, don’t you? Don’t worry, I’ll be there first for having
laughed.

I just have a feeling that wheels beats raft!

@Eleanor. Without buying into the whole creation thing myself, I have
actually read the whole of Genesis, as well as the rest of it. If you look,
you will find two quite distinct creation stories; while this may not
adequately explain the presence of the dwellers ‘to the East of Eden’, it
shows that the Adam and Eve story was largely allegorical.

Well I supposed that it was allegorical. But some people have a need to
beat us all over the head for Original Sin, and some of us fell for it.

But it doesn’t seem to be working all that well these days.

Quite brilliant, Anna – thank you.

Ultimately, I do believe that we need a strong government, but it must be
small. With the gigantic lazy leech we have today it is difficult to remember
that a good government is a good thing. Much as if you grew up with with a
drunk abusive father it would be easy to assume that no farther is preferable.
Rather a good farther is.

One small addition: “it has never been explained to my satisfaction who
these men were or how they came to

That’s an interesting point, about God creating other people. I have
often wondered about that. But there appears to have been a place called The
Land of Nod, somewhere to the East of Eden. Perhaps Adam and Eve were just
The Chosen People and just not supposed to procreate.
Although I don’t
think we were supposed to take this stuff too literally.

What with it being a total fiction and all.

so in fact Noddy has the rock!

Which of course left Adam & Eve doing it with a snake and an apple
– Rock on!