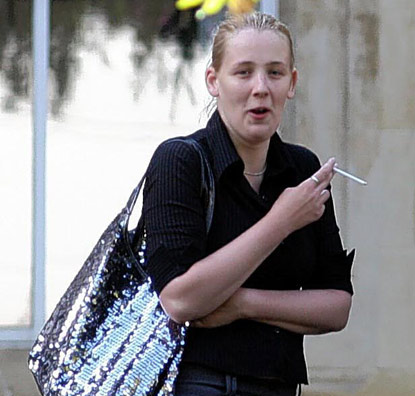 Yesterday I read that this young lady â I use the term loosely â was so âhotâ that a bank clerk was sufficiently distracted by her appearance that he stole Â£217,000 and funnelled it in her direction.

Ye Gods I thought, maybe there is hope for me yet, perhaps not the full Â£217,000 but I might still be worth a Â£21,000 distraction, then I remembered that it was a French HSBC bank clerk that I would have to distract, and those humourless souls are only distracted by a full bottle of claret and a five course lunch â and I resemble neither.

Perhaps some of my male readers could advise me as to whether the lady is correctly described as hot? Although I suspect that âhotâ is in the eye of the beholder and can vary from desperate moment to desperate moment â witness a case heard recently in the full majesty of the Court of Appeal.

It concerned a Mr Burns. âDoing a Burnsâ may well move into the current lexicon of modern language.

Mr Burns was driving along the Huddersfield highway in the early hours when he was seized by an urgent sexual tension, as one is. He happened at that moment to be passing a lady who might variously be described as âsex workerâ âprostituteâ or âold slapperâ depending on your politics, and how likely you are to obtain employment in Ms Harmanâs department.

âUnder the light of the sodium glowâ as they say, she did look vaguely attractive. They agreed that she would, being blessed with two hands, simultaneously relieve him of his priapic distension and Â£50. At the same time.

A passing police car had persuaded them both that another venue might be in order, and so they drove to the romantic environs of a disused factory.

Bereft of the sodium lighting, the young lady was looking less attractive by the minute, and so Mr Burns resorted to snorting a line of cocaine to arouse his ardour. He left the car to urinate against the side of it, there being no properly designated toilet facility available and on his return he turned on the interior light.

(I hope youâre not thinking of writing for Mills and Boon in your spare time? Ed)

Under the harsh glare of the interior light, he was even less enamoured of the ladyâs appearance. Further she had suggested that he might like to share his cocaine. Entrusting your penis to a strangers grasp is one thing, but sharing your coke beyond a joke.

Mr Burns grabbed the young lady by the armpits and forcibly ejected her from his vehicle and âplacedâ her on the cold wet floor whence she apparently bruised and grazed herself, as you do.

She demanded to be taken back to where he had found her and he refused.

As a âsex workerâ she knew her rights, and Mr Burns has just lost his appeal against a conviction of assault occasioning actual bodily harm. He was also convicted of committing an offence with intent to commit a sexual offence. i.e. procuring a prostitute.

The argument on his behalf was that it is settled law that you can use reasonable force to remove an individual from your house after he has refused to leave on request â surely the same applies to your car?

It doesnât where you have invited the passenger into the car. It was held, in effect, that the verbal contract to drive her back to where he had found her when their transaction was complete trumped the right to use reasonable force.

The moral of the story is surely to turn the interior light on before you complete the transaction?

Itâs such a romantic little story isnât it?

Even though Iâm ânot getting muchâ at the moment, I reckon a Viagra buttie
would be a prerequisite in order to indulge in sexual congress with the
âladyâ.

On the other hand, she may well do tricks.

Sheâs so hot her face has melted.

What a fucking moose!

Sheâs not my cup of tea. Bad posture.

âWhittaker insists he was forced to take the money because he was being
blackmailed by a man called John from Nigeria who knew about a drug conviction
he had as a 17-year-old in the Cayman Islands.â

This has got me completely baffled. Why was Nigerian Dave blackmailing him
to give the money to a Hungarian temptress? Or was he so distracted by her
âheatâ that he put the stolen money in her account, not Nigerian Daveâs. Are
the Hungarian and the Nigerian in cahoots? Do the clerk and the temptress have
prior knowledge of each other, even carnal? or was she just a distracting
stranger? None of this adds up.

BTW, Iâd say she was attractive, but not âhotâ, but itâs hard to tell from
a photo.

That woman is a typical Anglo bitch with all the sex appeal of a road
accident!!!! And thatâs being kindâ¦..

Anna, as you well know, I am not exactly fighting them off. But I would run
a country mile if something that revolting cast its basilisk gaze upon me!

Eldest Son just said she had a pulse therefore hot

I hope to God it was a joke

As long as she is a smoker I couldânt give two hoots what temperature she
is.
But wait a minute,is she a frogette ?

I shall pass on the ladyâs hotness Anna as a concensus seems to have been
reached with whih I wholly concur. On the other hand if youâre a French bank
clerk working for HSBC I suppose there are few better options available.

What intrigued me was the second half of the post.

But how do you manage to also hold on to the chips?

You donât. Youâve already exchanged them. Holding the chips is her
problem, and the quicker she gets on with it, the hotter theyâll be by the
time sheâs finished. Although I suppose the gallant might wait for her to
eat the chips first, which will have the advantage of nice warm hands.

Just make sure you donât ask for salt and vinegar.

Vimes,
Vinegar strokes with no vinegar, surely not?

You can always tell if sheâs had an unexpected orgasm thoughâ¦ She
drops her chips.

Fussy gits.
Thereâs an old saying from my youth in the military. If itâs
stationery paint it, if it moves shag it.

Ah the military mind! â why not buy paper of the right colour in the
first place?

How many have you had private? If it moves, salute it; if it doesnât
move, pick it up; if you canât pick it up, paint it.
Course it depends on
your regiment. Devon + Dorsets were we Rog?

I canât say I fancy her at all.

She might smoke but she is most definately not smokinâ, as I believe they
say, in that picture. Not a pretty sight at all.

I donât think the cash would help either but TBH Anna she is likely to be
in possession of the two items required to attract most of us males. Those
being a pulse and and vagina of course â¦

To be fair, that is no doubt the worst possible milli-second to catch her.
There is an outside (very outside) chance that had the shutter click a second
or so later she might be quite presentable.

Still, if I were to become a felon for a lady it would have to be of higher
quality than this.

I would add, this is my favourite sentence:

Most definitely not hot Anna.

What we call a 10 pinterâ¦.and weâre talking vodka here.

Does she not look any better now sheâs got 1/4 of a million stashed away
Lads?

Nope, she ainât hot. As regards the Burns case â for shame, I live in
Huddersfield and we certainly have an errâ¦vibrant red light district. On a
vaguely related note â a chap got done a bit back with taking dumps by the
side of the road, he had a regular calling place so, obviously bemused and
relatively disgusted, someone popped up a cctv thingy and he used to get out
of his car and lay a cable! Who said Northerners arenât posh? Uuurggh.

Blimey, even John Prescott wouldnât shâ¦â¦â¦â¦â¦â¦..oh I sâpose he would
especially if she offered him a pie!

Having worked as a night-club bouncer for many years I have seen many deep
and meaningless relationships blossom in no more time than it takes to down a
few lagers, alcopops and a little Columbian marching powder. A turn or two
around the dance floor as sweet nothings are burbled into earoles and a life
of connubial bliss awaits.

If I have learnt anything on my anthropological field trips it is this â
physical appearance is as nothing compared with an apparent readiness to allow
the male of the species to get his leg over. If the lady chooses well and
performs her part of the bargain convincingly enough and for long enough, the
trusting bugger is hooked until the scales fall from his eyes some time later.
Then he goes along to a nightclub, has a few beersâ¦.

âThe moral of the story is surely to turn the interior light on before you
complete the transaction?â

Or take a torch. Perhaps he should claim the âgoodsâ had been falsely
advertised.

âHe was also convicted of committing an offence with intent to commit a
sexual offence. i.e. procuring a prostitute.â

That is a thought crime.

âHotâ is a relative thing. Iâve done a study for you Anna (unfunded) and
that girl hits the hot level at 7.75 beers.

Mesmer â is there any specific gravity of beer reccomended? I understand
that some are more effective than others?

Anna, the calculation is BG = QB-BD where BG is attractiveness or beer
goggle co-efficient, QB is the quantity of standard beer (specific gravity
4.4%), and BD is the amount of beer that causes brewerâs droop. Hence for
some Chantelles the amount of beer required to conjure attractiveness
exceeds the quantity that prevents the hydraulics functioning.

Intrigued by the forthcoming assessment of the blogging menfolk, but I
suspect it was less her âhotnessâ that was the attaraction, but her percieved
availability. Any port in a storm, etcâ¦

The âladyâ in the photograph is most certainly not âhotâ, IMHO.

Excellent, as another Mr Burns would say â she was only the farmerâs
daughter, but she liked her Huddersfield.