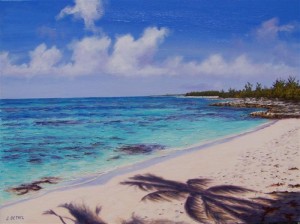 I was standing on a chair in the early hours of this morning. Not a mouse in sight. I needed the chair to reach a high shelf to rescue the one and only relic of my childhood that I own.

I know why I woke dreaming of Pitcairn Island. It was a blog post some weeks ago, I think by Obnoxio, on the ‘Fair Trade’ debate, which had attracted comments; one of which questioned the western construct of child marriage. Nowhere has the question of what constitutes a child marriage been more bitterly dissected than in Pitcairn Island.

Almost 5,000 kilometres of ocean separate Pitcairn from either Peru or New Zealand; it is one of the most remote places on earth.  It was some 50 years ago, and more, that I braved (not entirely willingly) the fearsome journey through the surf breaking over the coral reefs that surround Pitcairn Island. It is a journey that can only be made by long boat, crewed by the ferociously fit men of the island, willing their fragile craft into Bounty Bay. Had washing machines been invented then, I would have likened the journey to being on ‘fast spin’, as it was, I had nothing to compare it with. I was terrified. My reward was the flying fish, which my Father bought me.

Years later I prized the flying fish from the hands of my legal beagle brothers who had retreated into the comforting world of legalise to justify their destroying all the family history except that which they wished to retain for themselves. No way was that flying fish going to be considered part of my Mother’s estate, she hadn’t made that journey, I had.

I was not the first to make the journey, the Portuguese claim that fame, although there is evidence that Polynesians had been and departed even before Quiros arrived in 1600 and summit. They didn’t give the volcanic rock a name, that honour was bestowed by Robert Pitcairn, a 15 year old midshipman on HMS Swallow. Ironically, today he would be considered too young to have worked his passage there. The men of the Swallow were unable to land because of the surf “which at this season broke upon it with great violence”. Tell me about it.

It was not until 18 of the men of HMS Bounty mutinied and, led by Fletcher Christian, spent two months combing the South Seas, looking for a place safe from the threatening world, alighted upon Pitcairn.  They had the same Robinson Crusoe fantasies that many a Libertarian engages in from time to time. To leave behind the oppressive regime of the UK for somewhere lonely and inaccessible, uninhabited, fertile and warm. They had taken with them 12 Tahitian women, and from those lawless beginnings, was born the community which has never numbered more than around 200.

It was 25 years before they even had a visit from another ship – HMS Briton. Who sent a report to the Admiralty who promptly annotated the Island as a ‘British Colony’ on the grounds that there were people of British origin living on the island. They didn’t mention that those same people had set fire to the Bounty, so determined were they to break free from their British origins.

They have never received any financial help from the British Government; they existed by trading with the liners which passed through the Panama Canal and stopped to take on fresh fruit. To this day there is no airport or harbour. Nor even telephone.

By 1999, the population numbered a mere 50 – so you may wonder why the Kent Police Force, so hard pressed that they could not investigate all the crime in Kent, sent a young police constable, Gail Cox, out to the island  to provide a ‘temporary police force’. What political machinations had gone on in the background that led to her posting? Whatever, there she was, and somewhat bored. There didn’t seem to be any crime to investigate in this inaccessible island paradise.

Until, sitting with some of the women, preparing the breadfruit for an evening meal, the conversation turned to sex. Several of the women vouchsafed that their first experience of sex had been when they were 13 or thereabouts. Bingo! Ms Cox’s ears pricked up. This was a crime under the Sexual Offences Act 1956. There was crime on the island! Not only that, but some of the women said that this was ‘normal’ behaviour on the island, girls had always had their first sexual experience at around that age, and always with some of the sexually experienced older men of the island. Hah! Not only child abuse, but ritualised child abuse. Ms Cox was straight on the fax machine to her superiors, there being no telephone on the island.

DCI Vinson was despatched to make the long journey out to Pitcairn; he was to spend six years there, paid for by the British Taxpayer, his endeavours were to result in an MBE for services to the British Empire.

His investigation resulted in 9 women making statements that resulted in 17 of the men being charged with a total of 96 offences of child sexual abuse. 17 of the women who had originally told Gail Cox of their first sexual experiences refused to give evidence.

Now Pitcairn had its own body of laws in place. The 1966 Justice Ordinance which conferred jurisdiction in criminal matters on the Island Court provided in section 88 that “any male person who shall have carnal knowledge of any female child of or under the age of twelve years shall be guilty of an offence and liable to imprisonment for one hundred days.”

Until Gail Cox arrived in 1999, nobody had ever suggested that any other law applied. Suddenly the men of the island were being charged under British law – and it was on the legality of this act that the case turned. Neither the women nor the men denied that sex habitually occurred at around the age of 13, but it was the British law which determined that this was ‘child abuse’ and therefore ‘rape’, not the law to which the Island community had acceded.

While the common law operates on the basis that ignorance of the law is “no excuse”, the assumption that individuals know the law is premised on the fact that they and their advisors “should have access to [the law] in authentic form”. Had anybody ever told the islanders that this British law had been passed and now applied to them?

Article 5(3) of the 1970 Pitcairn Order required that “[a]ll laws made by the Governor in exercise of the powers conferred by this Order shall be published in such manner and at such place or places in the Islands as the Governor may think fit.” The place where the nominal Governor of Pitcairn had seen ‘fit’ to publish this ordinance was Fiji – some 5,000 kilometres away.

The matter went all the way to the Privy Council, that august body on which the likes of John Stonehouse, Jonathon Aitken, and John Profumo have sat in the past – appointments to the council being largely political.  They deliberated, and expressed themselves satisfied that the Supreme Court had exercised their discretion appropriately in balancing the public interest in bringing criminals to justice with the need to avoid giving the impression that the end justifies the means.Whether this was “public interest” of the victims, the Pitcairn public, the New Zealand public or others was not clarified.

Nevertheless the question of publication and knowledge troubled Lord Woolf and Lord Hope, both of whom gave separate opinions. Lord Woolf pointed out that:

No steps were taken to bring to the notice of the Island’s Council or its inhabitants … any of the laws of England that might be invoked on Pitcairn to deal with any serious criminal matter not covered by the [Justice] Ordinance [1966].

Despite its shaky foundations, therefore, the charges under the Sexual Offences Act 1956 were upheld.

The British Government has never supported Pitcairn Island, it is dependant on a (very Libertarian) ideal of self governance and self reliance. The UK claims no responsibility for it in respect of say the European Convention on Human Rights; it is outside of the electoral system and has no vote, nor is it subject to the same system of taxation, social security, or minimum wages.

Yet the UK was prepared to extend the long arm of its legal system into a community of 50 people who were of necessity closely related, and ultimately to engage in a farce whereby the eight men – half the islands male population – are only held in jail when they are not required to man the long boats, or climb the breadfruit trees to get supper, or any of the other essential tasks that they habitually do.

In the aftermath of the case the British Government have finally agreed to give the islanders £3.5 million to pave the mud track up the ‘hill of difficulty’ as the main road into their encampment is accurately known, and build a breakwater to make it easier for future Kent policewomen to land on the island. They have also taken the opportunity to install television, so that the Pitcairners may understand the British way of life.

They seem to be learning fast. The ‘victims’, have now applied for a cool £500,000  under the UK Criminal Injuries Compensation Authority scheme for any personal injury they sustained as a result of sexual assault since 1961. The British Government fought hard to prove that they were not entitled to access this scheme – they may be a British colony, but not ‘that’ British. They have now given in but the compensation offered comes with conditions. Only those who co-operated with the police investigation will be perceived as eligible for payment.

The law and politics move in mysterious ways.

Here’s a good article on the case:

I would love to hear more of your journey to the island all those years
ago. How about a post describing the adventure?

For some reason, The Wicker Man comes strongly to mind.

Where else can I read this kind of fascinating news? Nowhere.

They have just embarked on the end of civilization, pretty soon they will
taxed up the ying-yang and remitting their money to wastrels in Liverpool,
Newcastle, London and other welfare fiefdoms.

Sad that the arms of socialism can reach so far, and the descendants of
free men would not have arranged for the PC PC to fend for herself and thus
starve to death.

I had always thought that the case was one of incest.

Maybe it was the salacious gossip in whatever newspaper on the day but,
come to think of it, with only 8 men on the Island, the family tree must be
fairly short on branches.

Yes Stonehouse, Aitken, and Profumo sat on the Privy Council, but cases
like this are not decided by the whole Council but just its Judicial Committee
(which is essentially the same people as the former Appellate Committee of the
House of Lords, a.k.a. the Law Lords, i.e. what’s now called the Surpeme
Court).

Otherwise yes, very good article, and brings out an important aspect of
this case that didn’t get much media attention.

Surely the islanders must be eligible for some EU grant for something?

Presumably they were invited to enter the Olympic Games & will get
expenses to send a delegation.