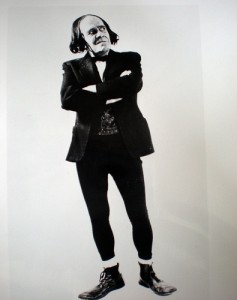 Tony Blair made the same mistake. Faced with a âBig Beastâ in his entourage who needed to have his ego assuaged, he gave Derry Irvine the historic role of Lord Chancellor.

Kitted out with the Max Wall tights, Irvine disappeared into a bottle of claret, emerging only to heap multiple embarrassments with his Â£650,000 refurbishment of the magnificent Pugin designed apartment which occupies the southern tower of the Houses of Parliament, and his drug addled stalker of a son who was eventually suitably incarcerated in America. Donald Dewar, once married to Irvineâs sainted wife Alison was the only person laughing. Those in the Lord Chancellorâs department wondered what they had done to deserve this punishment.

Unable to eradicate Irvine from the face of the earth, Blair tried to eradicate his power base â he abolished the role of the Lord Chancellor one sunny June morning. Henceforth he told himself, he would not need to fire Dear Derry, his magic carpet would simply vanish leaving him to plummet to earth at his leisure.

For a lawyer, albeit one with a 2:2 law degree, Blair had been paying scant attention to his lectures. There were over 600 pieces of legislation which invested power in the Lord Chancellor to do precisely those things which a Labour government should have had in the forefront of their mind. To act on behalf of the helpless, the vulnerable, the mentally ill, the unconscious, the children; to protect them, to enable them, to ensure that the law that they must inevitably interact with in their life did not take advantage of them, nor treat them unfairly. Remove the Lord Chancellor and entire departments were unable to do their work on behalf of those vulnerable people.

Edward the Confessor appointed the first Lord Chancellor, so enamoured was he of his new found religion that he wished to make sure that every decision he took was taken with his eventual interrogation by God in mind. Thus the first Lord Chancellors were men of the church, the better to advise Edward when his soul was in jeopardy from a knee jerk reaction to behead someone who had offended him.

Until Irvine was appointed, Lord Chancellors had always been men of compassion, who understood the role of equity in the days when it was a separate court of the chancery. Irvine, however, was not appointed for his great compassion, nor for his sensitivity; he was given the job and the prestige, the trappings, the grandeur, as a sop to his ego, because Blair owed him a great personal debt, and presumably, fondly imagined that he would be quiet happily seated on the woolsack in the House of Lords and cause less trouble there than had he been appointed to any of the other great offices of state.

He did however, manage to steer into place the Human Rightâs Act that multi headed hydra that has succeeded in biting Nu-Labour on the backside more times than can be contained in one blog post.

Blairâs next appointment was Charlie Falconer, his old flat mate, and the holder of many secrets of the young Blair life. Surely a reflection of the great esteem in which Blair held the office he had tried so hard to abolish. Falconer steered into place the infamous Mental Capacity Act which ensures that a government department can decide whether you receive food and water when you are too weak to speak up for yourself. Under Falconerâs aegis, the historic office established to protect the vulnerable began a new career overseeing decisions as to whether sickly babies should live or die.

Jack Straw was the latest inhabitant of the famous tights. Specially made ones; shorter, skinnier, the better to accommodate his knock knees. He did nothing to restore the prestige of the oldest law office in the land.

Now we have come full circle, and we have a Conservative Prime Minister faced with two major economic âbeastsâ, and the necessity of wooing the Lib-Dems. Â Ken Clarke who has spent the past few years shadowing the loathsome Lord Mandelson as business secretary, a past Chancellor of the Exchequer, and a man with proven expertise in economics â and Vince Cable the economic guru of the Lib-Dems, a man who has never held office in government. Guess which one in going to be in charge of the Business department? Oh, thatâs right you already know â the inexperienced one, Cable. Which left Cameron with a âbig beastâ all puffed up and nowhere to blow.

Except that magnificent apartment in the southern tower. Gillian Clarke will be as happy as Larry sitting up there like Lady Rosamunda stitching her eternal patchwork quilts. Ken will feel that he finally has his due in life, and will delve into what is left of the famously well stocked wine cellar. Cameron is relieved of an angry outburst from a thwarted ego.

What of the vulnerable and the dispossessed? They will just have to wait.

Clarke the rampant Europhile is scarcely going to tinker with the Human Rightâs Act â it is the nearest the UK have ever come to adopting the pan-European civil law system.

Will he tinker with the Mental Capacity Act? We shall have to wait and see how Henry Bellingham fares in the Justice Department with him â the only man in the Conservative party who has ever taken the remotest interest in the plight of the vulnerable faced with an intransigent legal system. Heâs been slapped down by Cameron once already, over the review of family law.

I had hoped that the Conservative party or the ConDom Prophylactic Alliance or whatever they are calling themselves today, might have restored the role of Lord Chancellor to the position it should hold, that it always did hold, that it had held for hundreds and hundreds of years – before the mendacious Nu-Labour tendency arrived, that of protecting the most vulnerable in our society.

In my opinion, the only role that government should have at all.