Good Lord – there are some interesting candidates standing for election in the Cambridge area alongside Old Holborn.

One who particularly raised my eyebrows is Helene Davies-Green who is standing for UKIP in South Cambridgeshire.

Possibly, no probably, no, emphatically, not a name that would be instantly familiar to you – unless you had taken a close interest in the Madeleine McCann case.

Her description in the list of candidates maintained by the local newspaper wouldn’t alarm the horses, but for those who have followed the McCann case closely, it is a name redolent of behaviour unbecoming a future legislator.

Helene Davies-Green, 62, is a married mother-of-three who lives in Bar Hill. She also has three stepsons. She was educated at Exeter College of Art, works as a clinical coder at Hinchingbrooke Hospital, and has served on Bar Hill parish council. Her interests range from field mycology and fell-walking to litter picking and motorcycling. She said: “Public money should be properly accounted for, and all political decisions should be made in public, unlike those of the EU Commission. As an MP, I would always be answerable to my constituents.” She added her Christian faith would influence her decisions.

A little background on Helene Davies-Green for you.

She and her husband Granville form part of the grandly named ‘Madeleine Foundation’ alongside failed solicitor Anthony Bennett. A man who was himself once briefly, very, very briefly, well actually just three whole days, listed on the Electoral Commission’s web site as leader of Veritas. He has in the past been a member of the Labour Party and UKIP as well as the aforementioned Veritas. In addition to his variable commitment to an assortment of political parties, he has also pursued a number of private prosecutions.

Well known for his homophobic stance, which he relates to his strong ‘Christian faith’ – indeed he was barred from holding office in the UKIP party after he circulated a pamphlet labelling the prophet Muhammad a paedophile, he went on to take a strong interest in the Michael Barrymore/Stuart Lubbock case. He brought an unsuccessful prosecution against Michael Barrymore and wrote a book claiming that Lubbock had died as a result of a violent attack of a homosexual nature which Barrymore had concealed.

Whether he left the Labour Party, and later UKIP, voluntarily or not is not known, but he then emerged as a founder member of Veritas with the strangely hued Robert Kilroy-silk, but his past association with Ian Anderson, ex-chairman of the National Front came back to haunt him.

Bennett then went on to latch onto the Madeleine McCann case, and unsuccessfully tried to bring a private prosecution – once again – against the parents in the English courts. It was ruled that the courts had no jurisdiction to hear his case. 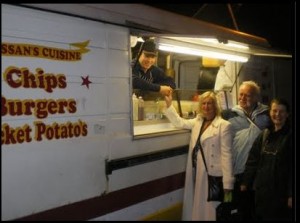 Helene Davies-Green and her husband Grenville have been two of his staunchest supporters. This photograph of her, Grenville and Debbie Butler was taken when they stopped for refreshments after an arduous day at Oxford University when they tried to disturb a lecture given by Clarence Mitshell, part of the Conservative Party’s campaign team. Presumably donations to their foudnation didn’t run to anything more than dinner at a burgher bar.

An earlier staunch supporter, Debbie Butler, fled the organisation amid claims that Bennett had not accounted for donations correctly. The claims and counterclaims have occupied an inordinate amount of police time between Essex Police and Kent Police, and are still not fully resolved. 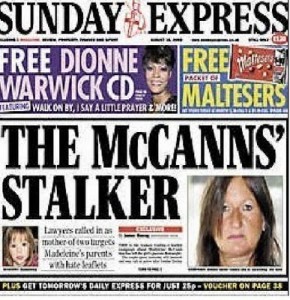 Debbie Butler, in turn, fell out with the organisation after some particularly lurid stories appeared in the National newspapers labelling her a stalker after she and her cohorts – Bennett, and the two Davies-Green’s took it upon themselves to push leaflets through the letter boxes of the McCann’s neighbours in Rothley publicising their foundations views that Madeleine was not abducted and that her parents were to blame for her ‘death’.

Curiously, Ms Davies’Green’s candidacy listing states ‘litter picking’ as one of her hobbies. Litter dropping might have been more representative.

A UKIP spokesman, quoted in the Sun newspaper, said last night: “Whilst having every sympathy with the McCanns and their predicament, UKIP believes in the freedom of speech.”

We all believe in freedom of speech, but not in freedom of libellous speech, a view obviously shared by Mssrs Carter-Ruck who have been in regular communication with the grandiose ‘Madeleine Foundation’ on this very matter, binding the foundation, of which Ms Davies-Green is a committee member not to further publicise their libellous claims.

The Sun newspaper goes on to describe Ms Davies-Green as a ‘folk-singer’ – it sounds positively cuddly, doesn’t it?

I was amused to find this question on Ms Davies-Green’s election web site.

Question … ‘What are your views on harassing the parents of a missing child? Would you support a law that makes that illegal? ‘

said … ‘Dear Ms Island I believe the present legislation with regard to harassment is adequate. If, however, you have any specific proposals for amendments to the Protection from Harassment Act 1997 or to any other Act of Parliament, please let me know. After the election, you could also submit any such proposals to your local MP. By the way, are you in South Cambridgeshire?

Nice swerve Ms Davies-Green, but I suspect that is not the last you will have heard of that question.

Hardly on topic but in the picture of Ms. Davies Green nd fiends about to enjoy a light supper at theitr favourite high class eaterie, is that David van Day, the male half of 1980s pop one-hit-wonders Dollar srving their burgers?

Just had to ask.

That could be the 64 thousand Dollar question. Or it could equally not be.

Anna, and so it begins….

Best vote for OH then!

I would, but I’m in the blind voting for the blind constituency

The papers have picked up on it,

Would this would be the work of that giant of journalism, Neil Syson, by any chance? UKIP may rival the BNP in “the biggest bunch of tossers” stakes, but I suspect that this may have the fingerprints of a certain “media monitor” and recent Tory appointee all over it – the sound that you hear is that of the bottom of a barrel, being thoroughly scraped.

Nobody is above the law, she states. well that should include incitement to hatred, threat