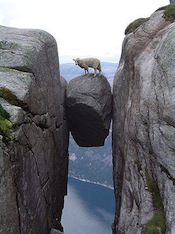 The blogging world is essentially diamagnetic to the iron fist of controlling legislation.Â We scattered like whirling dervishes to our keyboards to denounce Baroness Buscombe’s suggestion that the PCC might encompass the blogging world in its efforts to do the Government’s thinking and control all dissenting voices.

‘Never!’ we cried, ‘Prise our cold dead hands from our keyboards!’ we plagiarised over and over again. ‘We are free thinkers – what about Free Speech?’.

It is as though we have collectively imbibed the wisdom of the Devil, that there is only Carter-Ruck unfairly standing between us and our utopia of total anarchic freedom of thought and expression.

Ms Raccoon would humbly suggest that there is a far greater barrier on our route to the promised land than the relatively puny, and insignificant by comparison, figure of Mssrs. Carter-Ruck & Co. (Excuse me whilst I cock a virtual snook at that esteemed organisation, as is obligatory on the part of any blogger worthy of the name)

In the past two days, the name of Delroy Grant – the alleged ‘Nightstalker’ of South London – has resulted in no less than 196,000 Google entries, such is the worldwide interest in this case. Quite why Delroy Grant has fired the imagination of people from all four corners of the world is hard to fathom, there have been other equally lurid stories in the past, but that is by the bye. What is pertinent is that he has been charged with a string of serious offences and must stand trial before a jury of his peers.

One of the defining differences between the blogging world and the professional journalist’s world is the matter of training, particularly in media law, before rearing up on ones hind legs and applying hooves to keyboard. If the training is remiss or fails in the heat of the moment, there is still the watchful eye of experienced sub-editors to iron out unwise words. Bloggers have no such safety net, they stand or fall on their own estimation of what they can legally say. Indeed, they may take a lead from the newspapers, taking false comfort from the fact that the printed news will not lead them astray.

They would be unwise to take their lead from The Sun yesterday or today.

We have a historic right in this country, one that is currently in jeopardy, that of the right to a free, fair and impartial trial – by jury in the case of a murder. One of the cornerstones of that right is that the jury should judge only those facts which are put before them in the courtroom and not be swayed by prior knowledge of the defendant. For that reason we also have both common law ‘contempt’ and statute – The Contempt of Court Act 1981 (CCA) which limits the amount of ‘background information’ – or speculation – the media can print once a person has been charged with an offence.

The statutory offence is STRICT LIABILITY.Â You do not need to intend to interfere with a fair trial.Â It is a criminal offence, not a letter from Carter-Ruck. In 1994 The Sun published a photograph of a man charged with murder, and were found to be in contempt and fined Â£100,00. You might expect them to be more cautious than to publish two articles that appear to drive a coach and horses at, if not through, the CCA over the past few days. An interview with the man’s ex-wife detailing many prejudicial aspects of his character can scarcely escape being considered – prejudicial.

Jury trial hangs by a thread at present. If it is considered ‘impossible’ to regulate the blogging world from prejudicial comment affecting the right to a fair hearing by a jury – then the only alternative will be to abandon the concept of jury trial.

That would be a consequence which would please many of a totalitarian bent, it would be a sad epitaph if it came at the hands of the libertarian blogging world. We are between the rock of Free Speech and the hard place of Free Trial. Tread gently out there.

Perhaps The Sun, quite encouragingly, are attempting to push the boundaries. Although the current law – as you correctly state – is clear in itself, the provisions for the introduction of evidence of ‘bad character’ were introduced in 2006 and ought to have a bearing on this. If the same facts are going to be available to the jury, to be in their minds when trying the case, one argument might be that it is immaterial whether they are discovered through the Press or through evidence laid out before them in the court. If it is desirable for a jury to come to a decision which reflects the objective truth, then is it not equally desirable for them to be in possession of all the facts? Provided that what is reported is true, then there is no threat to the quality of their decision-making.

Where, pray tell, is the opportunity for cross examination of the ex-Mrs Grant’s opinion?

evidence is sooo passÃ©, so un-laba

I mean if you have a couple of ex-girlfriends with a grudge, you can get put on a register of repeat woman bashers

Anna,
This conundrum doesn’t require the abolition of trial on indictment. All that is necessary is to screen prospective jurors to ensure they have no foreknowledge of the defendant. I personally don’t read any newspapers. Very many others probably read no blogs. The antics of Peter and Katie are splattered all over the media, yet I could tell you next to nothing about them as individuals. There are a lot of people out there who simply don’t give a shit what’s written in the papers or appears on TV. Select your jurors from them. They’re not that hard to find, thank god.

As the ridiculous sight and waste of money that is the State Opening of Parliament – surely NOW is the opportunity to bomb the lot of them all in one go and rename it the State Locking of Parliament – I am reminded, looking out over a dull, grey, lifeless sky – the winds and gales having temporarily abated – of that old number …..”…..0ne day, you’ll look and I have gone, for tomorrow may rain, so, I’ll follow the sun……”

I can’t help wondering if Trial by Judges would be such a bad thing. Most of them appear to have some basic ability to understand what is going on.

They would need more Judges of course, so perhaps it’s cheaper to employ Juries.

of course they would have to be nominated not elected – possibly by the sitting PM and a couple of ministers (justice and equlity come to mind) with advice from, say, the AG and leader of the HoL …. can see it now, before yer ‘onour Alan Sugar or Seb Coe, Leonna Lewis or Gary Lineker – don’t ya just luv it???

“Most of them appear to have some basic ability to understand what is going on.”

Tell that to Al Megrahi who was found guilty by 3 judges instead of a jury, when the evidence was suspect, witnesses were dodgy and changing their stories and the UN observer said that he should never have been found guilty because of the lack of evidence.

I’d take my chance with a jury any day.

I can see it now – Lord Chief Justice Mandelson of All Things On Heaven And Earth And With The Greatest Love And Respect, Evan…. (The Today programme this morning – a hoot!)

I don’t think any system is perfect.

In Portugal you get a choice. Not that this has much to recommend it.
Or so I’ve heard.

Perhaps the collection of evidence should be more closely looked at.

A shame, then, that the #paulclarke twitter storm did not kick off prior to the jury on that farrago of erroneus legal and moral decisions retiring.