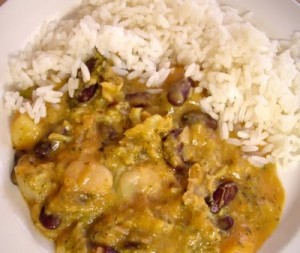 No, no, no! Not this plateful of NHS nutrition – which took several pages of comments before it was correctly identified as Mushroom Stroganoff – and then only by the poor unfortunate who was condemned to eat it – but the web site on which this daily guessing game takes place. HERE

One of the funniest ‘whistleblower’ web sites to hit the blogosphere in a long time, it is written by a journalist who has the misfortune to be currently enduring our wonderful NHS.

Pop over and send him your good wishes – your prayers might be appropriate too – some days it is hard to believe that he will survive another 24 hours……..

He has already generated a brilliant ‘Youtube’ spoof HERE.

That looks like it’s been partially digested once already. Groooo.

It’s been all-Glo in our own humble kitchenette this afternoon and now we have made enough biscuits to glue someone’s false teeth firmly together, we’re off to inflict them on the hapless birthday boy….

Ah You found it…. Love Henry…

that’s Gordon Brown’s brain that it!

does it glow in the dark?

in the light of the e-coli pandemic children are being warned away from touching animals….

in the light of the MPs expenses scandal people are being warned away from killing their MPs ….

what a wonderful world!

ps who is the Health protection Agency – not another quango surely????

I’m sure it’s actually very nutritious, especially for the cockroaches that no doubt infest the kitchen. Come to think of it, the brown bits…no, I can’t go on, sorry….

It was in the Sun its become an instant internet phenomenon Hes had about 150000 visitors since he started the blog in August.