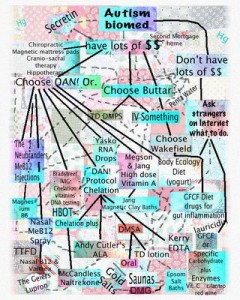 This is what we’re buying into if we, as is currently mooted, ditch the NHS in favour of the US way of life and health. Hey! Snake oil! Let’s go with it! DAN (Defeat Autism Now) is one of the biggest purveyors of snake oil transformations in autism medication.

In a nation that pays insurance dues to any old quack who ducks under the radar, any treatment is good treatment, and anyone who can tell a good marketing story is in with a chance to get insurance payments made to them. Autism must be the biggest money-spinner in the USA.

And it works best if autism is catastrophised. ‘My child is a train wreck’ works well. As does, ‘My child is toxic’. Millions of Americans believe that their autistic child has been poisoned by a Big Pharma conspiracy to vaccinate their children with mercury derivatives. Apparently, they all have Pink’s disease. What? Ask them why their kids’ teeth haven’t fallen out, the first sign of mercury poisoning, and even their orthodontist hasn’t got a clue.

There’s a tradition of salvation in the USA. And it’s assisted by medical insurance. Moreover, it’s within the pageant tradition. At every DAN conference the ‘recovered’, autistic, children march in to wild cheers from the captive audience.

And why is this happening? It’s mostly the set-up. In the US, autistic children are identified at 30 months, and if they can be diagnosed at that age, they can get all interventions paid for. But research shows us that autism is usually identified rather later. There’s a dodgy is it/ isn’t it (?)  autism window in children between 17 and 40 months. All research into autism has revealed that this window is crucial, and we can’t call it. That window, when autism may be an option, but may be not be, is the key. Truly, it can’t be diagnosed until after 36/40 months. Any number of diagnostic  alternatives are available until then.

This has given rise to multiple manifestations of ‘recovery’ and ‘regression’ in the USA, which have been the subject of best-selling books and ‘cures’. Catherine Maurice’s Let me Hear Your Voice, and David Kirby’s Evidence of Harm are among the worst manifestations of this marketing issue.

In the UK we can’t, as parents, have access to the veterinarians, osteopaths, dieticians, and nutritionists, and behaviourists who contaminate the USA private medical world with their claims to ‘cure’ autism in 18-month old children, and earn big bucks by appealing to those who won’t accept that autism is a neurological and largely genetic condition. Medical insurance pays for the treatment meted out. We have to make do with an ineffective NHS for diagnosis and treatment, and that can take years and lots of heartache. Who’s to say what’s best?

On balance, I’d go for the NHS. It’s slow but steady Eddy. It knows what it knows. It’s established that for some children who may have traits of autism, there may also be co-morbidities of gastric and amino acid involvement. But autism is not primarily a gut problem, nor an amino acid problem – nor in fact, a heavy metal issue – although all these environmental problems (including GABA dysfunctions) can play their part, and often do. Relieving any co-morbid bio-med issues may relieve pain, and therefore may greatly help communication problems, but that’s a welcome assistance, rather than the universal panacea it’s deemed to be by those who earn a living from claiming ‘cure’.

Mark Hyman, who quotes the discredited UK researcher, Andrew Wakefield, and Bradstreet, and that awful Holmes study, and the Geiers who have no evidential base, may not be wrong. But he’s not right. There is no empirical evidence to back up his claims. He sounds like a pageant organizer.

Thank goodness for the NHS and its bureaucratic scepticism. Thank goodness that we as a nation deny the veterinarians and the quacks and the Salvationists. We all have a state insurance policy.

There are some drawbacks, but at least we don’t have to accept the brutal marketing of dubious and unsupported medical claims which may be acceptable in the free market economy of health in the USA. We have, thank goodness, grown beyond an annual advertising pageant of the ‘cured’.

Mark, yet another ‘miracle’ cure? I hope that you put this child in this year’s pageant. Hey, that’s what DAN is all about! Great. Lovely. Keep the marketing going. It must be earning you a fortune.

All of my children were vaccinated on target. But I have to say that I wouldn’t do it now.

Sabot, really? Even though measles can lead to major deaf/blindness problems?

You’d let your children inflict that on others?

My ex was deaf in one ear due to measles which destroyed his aural nerves. I know how devastating that can be.

Would you willingly inflict that harm on a child, by not vaccinating your own? How irresponsible is that?

That’s great for a condition for which slow but steady is the best response. Such disorders are in a tiny minority. When I had very little money I had to pay for private care because the NHS is also slow but steady with patients in crippling pain who need a medical certificate to work and cannot afford not to work. I would have been far better off in the USA.

That all said your criticism of autism/vaccine link campaigners is justified. randi.org has a lot of information.

What they are putting in these vaccines frightens me silly. And they are not being truthful about it. They are also forcing the use of the three in one vaccine when there are alternatives, effectively lining up children and treating them like cattle. until there is more honesty about these things, I would not be prepared to risk it.

Just get educated. Life is not a conspiracy theory.

It isn’t Meej? You mean they are not out to get me? Good grief, I’ve wasted all that money surrounding the place with barbed wire too…..

Fortunately I don’t need to get educated. As I said earlier, my children were all vaccinated many years ago. And they all survived.

However, I never have flu jabs. I take some weird French Homeopathic stuff instead. I haven’t had flu in years, so I suppose it must be working.

I take French haemaphrodite stuff, too. S/he tells me it works. Or is it homophilic? Or pathic? I always get mixed up with Greek.

Whatever you do, don’t Google the stuff I take. It could put you off for life. I however, am made of sterner stuff.

“Whatever you do, don’t Google the stuff I take. It could put you off for life. I however, am made of sterner stuff.”

Yes, I know. I have known you for some considerable time .

I know you are made of sterner stuff. H0meopathy doesn’t and never has worked for me. Don’t dilute meds or toxins is my position.

But if it does it for you, that’s lovely.

All the best, Sabot. You were always honest, and kind.

Thank You, Meejician. It is kind of you to mention it. Such a small world is The Internet.

To tell the truth, Doctors are something I would rather avoid, so I’ll try anything else first. And of course, France is very much into Homeopathy.