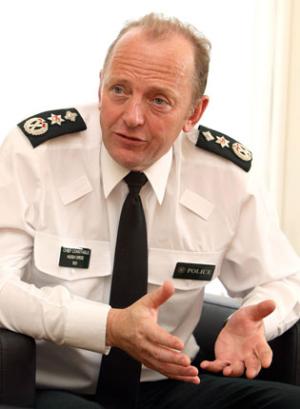 A fascinating interview today in The Independent with Sir Hugh Orde, President of the Association of Chief Police Officers (ACPO), and a powerful vote, incidentally, in favour of supporting the main stream press, for I doubt that any blogger would have been able to bring this man’s views to the public in the same way.

Sir Hugh was responding to the suggestion made by the Conservative Party that Police Commissioners should be directly elected, as they are in the US.

What he had to say is alarming enough, but not nearly so alarming as that which he didn’t say.

It is scarcely surprising that a man in charge of the unelected ACPO should be opposed to elected Commissioners, I was amused by his comment that this could:

“drive a coach and horses through the current model of accountability.”

Indeed, driving a coach and horses through the currently unaccountable model was quite possibly the intention behind the suggestion, Sir Hugh!

It was his articulated ‘fears’ that struck a chord with me though. Asked whether he feared that a BNP or far-right candidate could seize upon this, Sir Hugh replied:

“Yes, that is a risk. If you have a system whereby anyone can stand to be elected as the local police commissioner, you could have any Tom, Dick or Harriet standing. If they can muster enough support against a backdrop of public apathy, then of course it is a risk.”

Note, Sir Hugh made no mention of any fears that a far-left candidate could seize control of a local police force, this idea does not apparently keep him awake at night. Only that a candidate committed to the idea of law and order should be in charge.

I wonder also, how his fellow police officers feel about being bracketed along with lunatics in the following quote:

“Do they think that the public are so interested in policing that they would turn out and vote? And for whom? A politician? Or do they mind if they get a lunatic or a retired copper?”

The BBC headline on this story quotes Sir Hugh as saying ‘Met must be free from politics’ – immediately after it was released along came the Belfast News with an interview with Sir Hugh – ‘Life should mean life – Orde’ – where he is described as being the ‘first senior policeman to comment on the decision to allow the mass killer, Abdelbaset Ali Al-Megrahi, to fly home to Libya on compassionate grounds’. On the issue of Lockerbie, he added: “I can fully understand why the public would expect someone who committed an atrocity to serve a substantial sentence. Many would expect him to rot in jail.

What to make of Sir Hugh? An unelected leader of policemen who fears that direct elections could put in power those committed to law and order; and a policeman who believes that the Met should stay out of politics, but reserves the right for himself to comment on the deeply political decision to free Megrahi?

Hypocritical, I call it.

It is a nonsense. If he had bothered to look into the american system he would have discovered that those putting themselves up for election as police chief will have had to have policing experience in supervisory positions.

What he says is political, with a capital P, what he says is nonsensical. The Home Office dictate who local police authorities ‘choose’ as their chief constable. All are now from the same Home Office mould. Ensuring that only first class degrees are admitted into that rank (it does not matter if the First Class Degree is in Outer Mongolian Folk Dancing…it is a First Class Degree).

Then American police chiefs do have experience of the sharp end. Modern UK police chiefs have had a charmed life, hidden from public view, until they are suddenly in top positions. IF they prove useless they are moved sideways! But the Home Office will control. The Home Office is controlled, allegedly, by the Home Secretary who is a politician. SO the Police, in the UK, are now politically controlled as Ian Blair proved almost on a daily basis.

NOW, who pays for ACPO? You and I through taxation and the Home Office dole out the largess. So ACPO is a tool of government. End of story.

Locally elected Police Chiefs will mean that local policing will be what the local people demand. Now is not that better than what we get now? Of course it is.

The lunatics have already won, and now the police are just the para-military wing of New Labour.

I am shocked. A feeling that has been creeping up on me for some time. I did not realise that the appointments of Police Chiefs was a political thing. I thought that they came up through the ranks and were promoted because they were good at their jobs of being policemen and solving crimes and such. It appears that I might have been deluded.

So does this mean that Police Chiefs are chosen by the Government of the day, according to their political leanings? And if so, what would would be the difference between that and Elected Chiefs?

The police, like all public bodies, are only accountable within their own sytems. Has anyone had a complaint to the NHS answered, the BBC, Local Authority? Didn’t think so.

Hugh Orde is an idiot and a potentially dangerous one. how many times have we witnessed the police getting off with crimes ordinary peple would be gaoled for??

Nah, accountability to the people who pay his wages is the only measure. After all, once we’ve hung all the MPs there’s a queue including the BBC, Quango, the Police, Local Authorities, the NHS to get through…!!!

Get rid of them all

Delighted to see you back in the land of English keyboards Saul…….did you enjoy?

A welcome break, free from 24 hour rolling news. Apathy is a state much complimented by Sun sea and sand. The “soap” that is British politics can be picked up with a sense of having missed nothing.
Left to their own devices people in positions of authority will build their own little indestructable empires. The trick is to instill a sense of acceptance amongst the electorate. The next GE is a chance for the silent majority to say enough is enough. Will they say it? That remains to be seen.

Blink says: “Nah, accountability to the people who pay his wages is the only measure. After all, once we

On a separate note. Buying some basic toiletries in Manchester airport departure lounge required the presentation of a boarding pass???? That is a new thing, after questioning the manager I was told it was for security reasons????? Meanwhile in Dalaman airport departure lounge the tills in the duty free shop (purchasing a tin of boiled sweets) can not be opened until your passport is scanned through it????? I would be interested to know what information is in the passport bar code, plus what it has to do with Fox’s glacier mints.

Trust me to mention Fox’s glacier mints with Gloria around!

Just as well you weren’t trying to get a pack of Werther’s Originals! I’ve heard they can’t be purchased without a full strip-search….

I was afraid to ask for some Nuttals mintos, not to mention a sherbert fountain.

.. I shudder to think what would happen if you’d been barmy enough to try to get a bag of Jelly Babies …. speaking of which, school’s nearly out so Smudd’s Taxi Service at the ready. TTFN!

Dreadful little man, stuffed with his own pride and arrogance

Drunk with power, so much so that what he says is stupid

http://www.bbc.co.uk/bbcfour/documentaries/features/wheatley_letter.pdf Have a read its great stuff

No vested interests then?