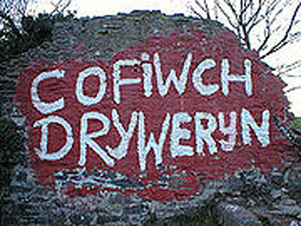 In the days when I drove daily to Aberystwyth, I would pass a poignant reminder of my Father.  Just outside Aberystwyth on the A487, on the side of an old ruin, were the words Cofiwch Dryweryn. Many must have been mystified by these words.

My Father was a man greatly damaged by his years as a very young bomb disposal officer, one of the youngest Captains in the Royal Engineers, during the last World War. The words ‘Post Traumatic Stress’ were still a twinkle in some young psychiatrist’s vocabulary, so he was just left to get on with his problems.

He did so by taking a job in Liverpool for the Corporation in charge of building the Llyn Celyn reservoir which plunged him into a war zone between Welsh Nationalists and the people of Liverpool that must have made North Africa seem a distant peaceful memory, and which ultimately fanned the flames of Plaid Cymru and sowed the seeds  for Welsh devolution.

The people of Liverpool needed water, and the Welsh valleys had water in plenitude. It apparently never occurred to the Westminster Government that the Welsh people would object to one of the bed rocks of Welsh culture and the Welsh language – the village of Capel Celyn – being flooded and the people made homeless in the process.

Object they did, vociferously, but despite not a single Welsh parliamentarian voting in support of the reservoir, the construction went ahead and the people of Liverpool had their water – or rather they had the Welsh water.

The ‘Remember Tryweryn’ or rather ‘Cofiwch Dryweryn’ graffiti on the side of that road became an icon of Plaid Cymru, and the sign has been carefully repainted year after year by unknown hands.

The hours that my Father as a young engineer, had spent tramping those Welsh hillsides marking out the co-ordinates of the future dam, must have meant a great deal to him. When, in later life, his problems overcame his ability to rebuild his life and he decided to take his own life, he went to a great deal of trouble to travel from his home to a high point overlooking those valleys.

The remainder of his family never did collect his ashes from the undertakers, and when I managed to track them down years later, it was to find that the undertaker had himself died, and there was just a note to say that in the absence of other instructions he had taken it upon himself to return my Father’s ashes to the spot where he was found, in those same valleys.

The original graffiti was the work of veteran nationalist and prolific author Meic Stephens who a few years ago owned up, describing it is as “my most famous statement, my best-known poem, my most eloquent speech, and my most influential political act.” In a leaflet promoting the fund-raising campaign Llanrhystud Council observes, “The flooding of the valley became a turning point in the history of Wales, convincing Welsh people that they must have the right to govern their own affairs.”

So I am delighted today to discover that the Welsh Assembly have announced a £30,000 grant towards the £80,000 cost of buying the wall on which that graffiti was painted so long ago, and to preserve it for posterity as the ‘last symbol’ of the campaign to prevent the flooding of Capel Celyn.

My cheque is in the post towards the balance.

Wrote that before I read it.

It probably loses in the translation, but:

Vimes,
Thank-you for that. Beautiful.