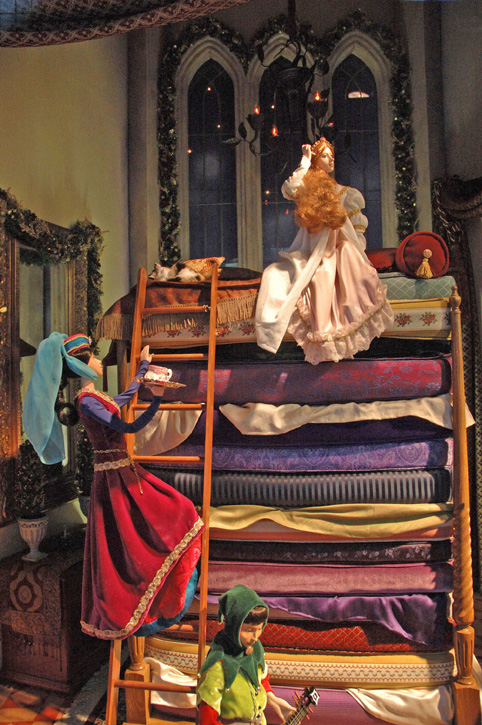 Princess Emma of Sheffield can’t have been sleeping easily the last few nights, and the news that there are more than 100,ooo ‘Ps’ – otherwise known as Polish construction workers – heading to her feather bedded kingdom has caused great consternation in her land.

This could be why the latest edition of ‘Benefit Busters’ has been withdrawn from both the ‘on demand’ section of Chanel 4 and from the 4od web site. Those who missed Thursday night’s episode are being denied the opportunity to see Emma fail to justify the £700 million the government are shovelling in her direction to ‘train’ the unemployed and make them ‘job ready’.

Edited to add – I now have a link to an episode if you want to watch it. HERE

Her crack troops of trainers apparently considered a scene reminiscent of early editions of Blue Peter as the great unemployed sit around reading the Daily Star and constructing a ‘bridge’ out of old yogurt pots and yards of sellotape, whilst occasionally looking up and languidly turning down the opportunity of work with various local employers to be the best possible advert for the A4e company whilst they renegotiate their contract with the tax payer. The public were reputedly less than impressed.

Young Mark Pilkington, an ex-army man who had had a ‘few problems’ since leaving the service was hailed as a success – but he was already highly motivated and actually wanted employment. He took on a job laughingly described as ‘landscape gardener’ but which appeared to consist of clearing roadside brambles. Mark was delighted though, and there were touching scenes as he spent his first weeks pay cheque on his partner.

Disturbingly, although A4e claimed Mark as a success, and presumably will receive their full £1500 payment for finding him a job, he was already motivated at the beginning of his mandatory course (his benefits would have been stopped if he had not attended) and worse, when he had landed the job and called into the Job Centre to tell them, it seems that his Job Centre ‘controller’ was on such first name terms with the Greenco landscaping company involved, that she was able to pick up the phone, dial the number from memory and address the person at the other end of the phone by christian name…….in which case, why hadn’t she got him that job without the tax payer having to put another £1500 under Emma’s mattress?

Sadly within four weeks, he was laid off, through no fault of his own, and although A4e and Emma Harrison get to clock up another £1500 from the tax payer for having got Mark back into work, Mark will spend the next four weeks without any benefits whilst the DWP rebuild his claim. Apparently, this sort of thing goes on all the time. Companies take the unemployed off A4E’s hands, then drop them, just like that.

The staff at A4e seemed remarkably keen to recommend low paid, temporary, agency work, and when asked about this during the interview, Emma replied she was ‘gutted, gutted’ – she must be gutted – she gets £1500 worth of gutted every time she persuades someone to sign up for temporary work as young Mark did. It was pointed out to Emma in the interview that she might like to take this up at Government level and that her clients seemed to be losing confidence in her, she replied ‘ d’you fink I’m sum sort of Einstein or summink’ and giggled with embarrassment.

You can take the girl out of Sheffield and make her business woman of the year, but you’ll never iron the Sheffield out of her.

One unfortunate fellow had scribbled BNP on his folder (not actually uttered the fateful initials!) – wash your mouth out lad, this is nu-labour land, you can’t say anything like that! He was dressed down in front of a room full of his colleagues (and the watching TV audience) and threatened with being thrown off the ‘course’.

The most successful of her employees was the one who was handing out short term contracts – ’0′ hours, no job security – there should be a total bar on A4e getting paid for putting people into employment that they know cannot last.The first episode had ended with three of the women getting two weeks unpaid work experience at Poundland!

Surely the Department of Work and Pensions must stipulate the minimum that Emma should be doing for her £700 million – I understand that her new contract will only give her 40% of her money up front, and the rest conditional on getting a job – but what sort of job? If this is how the company and its CEO perform in front of the cameras, God only knows what goes on there in real life.

Today we read that the News of the World is shocked to discover that a staggering 225,000 foreign workers have been signed up to build London’s 2012 Olympics.

Ministers promised the billions invested in the 2012 Games would be a LIFELINE for local workers and firms.

But the Olympic Development Authority (ODA), which is battling to get locals into the jobs, has found many of them unwilling to give up their BENEFITS.

As luck would have it, Poland is hosting the 2012 European Soccer Championships, and the:

“Economic Ministry believes preparations for the European soccer championships will generate at least 100,000 jobs in Poland. If the country is lucky, the total could be much higher. Dziennik indicates the number of jobs that the Euro 2012 effort generates may reach 370,000 jobs by the end of 2012. […] A labor shortage will complicate that effort. Tens of thousands of Poles with construction skills emigrated to Great Britain, Ireland and other European countries after Poland joined the EU in 2004. Estimates are that Poland needs about 200,000 construction workers right now. It will need more as the pace of building picks up. To meet those numbers, the country will have to recruit many workers from abroad, not only from neighboring countries like Ukraine, but also from Asia, especially China.”

If A4e can’t get off their backside and find some jobs for labourers in the London 2012 Olympics building boom – then perhaps they could export some workers to Poland to fill the vacancies there – after all they do have offices there.

I’ve got a better idea. Instead of padding Emma’s mattress, why not offer the £1500 to the long term unemployed as a bonus after they have managed to find and keep a job for a minimum of one year?

Anna, there is no way A4e can offer real job training – they won’t spend the money on people to do the training and the facilities necessary for it. Add to that the fact non of the company would deign to get their hands dirty because all they want to do is stick their snouts in the public money trough.

I assume you mean long term UNemployed in your last paragraph – that would work for some people but what is needed is a radical rethink of the benefit system.

Using a Negative Income Tax system – coupled with the fact that if they spend it all there is no extra top up money available except what they work for would concentrate minds.

Anna – would you mind if I posted this (with full credit of course) – on the Yorkshire Libertarians blog?

i seem to remember it cost