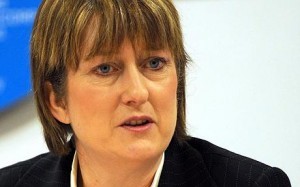 What other explanation can there be for his decision to download adult movies on pay-per-view cable TV, to be watched in Ms Smith’s ’second home’ in Redditch, and then allow his wife to claim the cost back from the tax payers?

Ms Smith was said to be ‘mortified’ today after she was forced to offer a humiliating apology over the expenses claim.

The Home Secretary said she ‘mistakenly’ submitted an expenses claim which included five pay-per-view films, including two adult movies which were viewed at her family home in her Redditch constituency.

The relationship between Ms Smith and her husband was said by Government insiders to be ‘very difficult,’ but stressed that the couple were still together.

Still together? Just as well – we wouldn’t want the tax payer to be paying for a ‘blue movie venue’ when the Minister involved no longer even visits the house, would we?

‘The entire Commons allowance system is now indefensible. It’s one thing to make dubious claims on the location of your second home but for the husband of a Home Secretary to be claiming for pornographic TV is completely beyond the pale.

‘It’s no good Gordon Brown promising an inquiry at some point in the future. This must be reformed now.’

Oh dear ……… It just gets worse. I suppose the pergola and gardening equipment that we have paid another Government woman for will truly pale into insignificance now.

If I was a Guv employee …………… would I be able to claim for my perfume on expenses?

Time for Jacqui to go home now ………… to whichever home she prefers of course …………. But it is seriously time to go home.

Time for David Cameron to step up the pressure now.

And of course we will never mention all the dodgy stuff that he used to feist upon the nation when he was at Carlton Television. I will not breathe a word about it.

If this information was released in time for the Sunday papers …………. I can’t wait to see what may be revealed during the G20 summit! I wonder what else is going to be put out there for Gordie to cringe over? I can’t wait!

I would like something really juicy …………. Something about the UK involvement in Guantanamo Bay would be nice.

Research for a private member’s bill?

Allo Penster…good to see you!

I’ve just returned from my local supermarket, that likes to help everyone, during which time, 60 -75 minutes, was aghast to find our wonderful nation put at great security risk as 2 twelve year old community support officers, in full dress with radio contact to heaven proceeded to do their bloody shopping whilst on duty!! The little shits were filling a large trolley with all their goods, checking prices and labels as they went, occasionally checking nobody needed them in an emergency, looking rather sheepish….and presumably getting the ‘public’ to pay for their efforts at the checkout!! This is not the way I want my taxes spent!! Who the fuck do they think they are?????

Good afternoon Penster! Lovely to see you! You must call again. ……….. We have lots of interesting stuff as you can see. Feel free to browse. We have not started charging yet! …………. However I am grooming my trusty steed in anticipation of a good old joust next week in London ……….. Just in time for the G20. I am using bronze-tips on my jousting-stick …………. to keep the riff-raff away.

The Metropolitan Police have just sent me an email to say that they will be mainly enjoying the sunshine …………. and have promised not to be heavy-handed …………… like last time!

I am just waiting for a reply off the Secret Service and the ‘Taser-Powered Terror Squad. I suppose they are really busy doing their ’special’ training exercises this weekend ……….. just in case Boris’s Crusty Army turn up! As I say ……. the police will just be there to enjoy the sunshine ………….. They don’t want to create any incidents.

Most excellent Coco, and yes, am having a look around, free ranging this evening.

Stay on top of the constabulary. You should give those delegates a darn good seeing to with your gold tipped cane. I myself prefer a stick with a horses head handle.

But do spare good Mr Rudd, he’s a good guy although his wife dresses like a pirate.

Blink! This is absolutely bloody outrageous! I would usually film police officers of any rank doing what they shouldn’t be doing ………. Alas I have been warned that to film a police officer doing anything naughty could put me behind bars now.

Considering the amount of dosh our CSPOs are paid – without doing night-shifts etc. – I just want you to know that I share your anger.

How do you feel about them making friends with members of the community and sitting around in their homes, having copious cups of tea and watching telly for up to three hours a day? I know at least two pairs who do that ………. And they get their hair done at the same time. Nice work if you can get it! Then back to the nick with the lunch you have just bought. Lovely!

You are right Janes. Maybe Jacqui will stop to think about how all her high-profile messing around with new laws brings her own dubious family members into the public eye. Up to now she has brought her sister’s family and her husband into the limelight. Mmmm!

Just how secure she wants to make the public feel when she herself had uninvited men jumping about on her roof a while ago, makes me wonder if she is all there with her marbles. I think she should sort her own security out first! What is her current job-title and job-description? I wonder what it will be in the next Cabinet shuffle?

Penster ……….. Not quite made my mind up about Rudd yet. Good to see him talking to Kissinger though. Unlike Gordie ……… Rudd appears to want to take advice and learn a bit!

Doesn’t say much for Jacqui’s allure, either.

I feel sorry for the guy, being shackled to a hippo like that. If he needs the occasional spot of relief — albeit via self-service — who are we to quibble?

Exactly Dennis ………….. However, I am sat here wondering if this was even for her Hubby’s pleasure at all. …………… Maybe it was for Jacqui’s! Or ……….. maybe it was for an orgiastic get-together for several Ministers and their wives and partners! Perhaps they do this every week – but a couple of times, somebody forgot to bring the video – so they had to pay for the film!

That would make good copy would it not? Gordie swinging away with Darling and the Millies ……….. And Mandy!

Jacqui had better pull herself together quickly ………. I don’t want her eye off the ball for too long today. She should be looking after our Home Affairs ……….. because a cyber-spy network has hacked into nearly 1300 computers at NATO, various Ministries, Embassies, banks and news organisations! Are we safe Jacqui? Prove it!

Hurry up Jacqui! Is the Ministry of Defence really safe from hackers? I am not convinced! I know the MOD likes to inform us that everything is externally operated ……….. but I need reassurance.

What if the Chinese now know where we keep our sling-shots and boiling oil? Russia could already have this information by now. As a British Subject ……… am I at risk?

Caught with a smoking gun if you’ll pardon the metaphor.

Dennis, I don’t quibble, nor blame him – but I don’t think the tax payer should be paying for his inspiration either!

Just trying to work out how many ‘mistakes’ have been made in recent expense forms over the past ten years. It must be worth somebody’s while trying to calculate all this. Cameron must have a lacky somewhere who could try ……….. It may give them a grace and favour job in the next round of sleazy Governmental activities

“whilst she is holed up in her sister’s back bedroom”

I tell you DagenhamDave ………….. we don’t know the half of it! I am wondering today if Jacqui is a Frau Sin ………. and accepting all kinds of vouchers and freebies from MPs and Lords so they can have a cosy night in. She is probably running a mini Cosa Nostra ……….. Ssssh ……….. It’s this thing we have. Select members only! ‘Scuse the pun!

Not only have we had her other expense hit the news, but hubby is also on the state payroll as well as her “employee”.

Now we find he is having a “sherman tank” on cable paid for by the state and again she seems to regard that having broadband/cable on expenses as fine.

Quite what do MP’s spend their wages on when we are picking up the tab even for their grumble flicks?

I’m thinking of changing my avatar!

Fidothedog …………… It sure looks like a passport to great benefits for the whole family when you get a decent job in the Government these days. And then there is all that dosh you can spend on second homes as well – so you are not all on top of one another. Maybe Jacqui’s hubby was at another home feeling lonely when he is alleged to have watched those movies. My jury is out on that one yet.

It’s all over most of tommorrows front pages, although “The Daily Sport” wasn’t featured on the press review, i wonder what they’ll make of it all

Time for this silly woman to go, me thinks.

How much more does she think she can get away with?

How much more do we, her employers, have to put up with?

GET RID OF THEM

“….whilst she is holed up in her sister’s back bedroom?”

Still if I were married to Jacqboots, I think I’d prefer to crack one off watching a couple of young nubiles on DVD rather than perform conjugals.