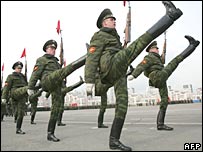 Jacqui Smith’s heart must have beat a little faster this week, when news reached her of the advances in the science of Internet censorship made in Germany.

11 German detectives descended on the home of Theodor Reppe, in the name of ‘discovery of evidence of distribution of pornographic material’.

Without informing Theodor of his rights, they demanded the passwords to his web site, asked that the entire domain be disabled, and then made a false claim that he had agreed for all this to take place without witnesses.

Why, you may ask, should a purveyor of child pornography be treated any better? Why indeed.

Except that Theodor is not a purveyor of child pornography, he is the registered domain owner of wikileaks.de, the German equivalent of the well known wikeleaks.org – feared by governments across the world.

The time is coming when we will have to blow these bastrads out of the water – again, all for the sake of the children…..

They are definitely out to censor the internet ……….. The New World Order wishes to instill as much as fear as possible ………… because they know that prevention is cheaper than cure.

I would like to see the costs of a bunch of police going into somebody’s home or place of work. What is the average cost cost of a bunch of coppers poring over somebody’s personal emails and visited web addresses?

Given that coppers are notoriously un-pro-active these days …………. what if they find they have been given a particularly interesting job? They could obviously seriously milk the job at a tremendous cost to the tax-payer.

I personally know people who have done this in the past …………. So what are the safe-guards? The ones that I know are particularly adept at filling in time-sheets! And as for expenses and extra software and hardware! Let me just say that their own families have some very up-to-date equipment!

check out common purpose it seems to fit//