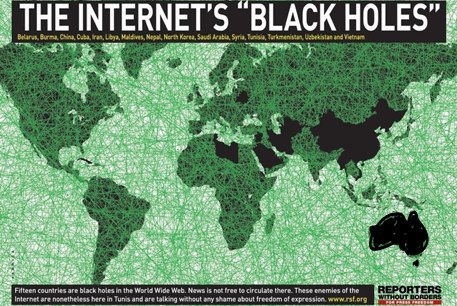 The Australian Minister for Censorship Stephen Conroy, has previously claimed that his proposed Internet censorship regime was focused on blocking ‘illegal sites’. Until now.

At a Senate committee on Monday, Conroy said that the trial of the filter now underway was based on blocking ‘illegal sites’, but the censorship of other legal content would be ‘determined after the trial’. Conceivably the additional content that will be considered after the trial relates to content such as gambling sites, websites that counsel suicide, seditious material and material banned at the behest of multinational copyright owners, however we will never know.

If there is no access to the list, there is no way to appeal a site being blocked incorrectly. Imagine a commentator leaving a lurid comment or pic on a blog, or a forum, and the site being added to the list based on this one instance.

A secret blacklist permits the unfair and arbitrary justice that is the hallmark of totalitarian Government.

‘Child protection’ has been the rallying cry for all the protagonists of Internet censorship, but £1.3 million which was originally allocated to the Australian Federal Police’s Online Child Sexual Exploitation Team (OCSET) has instead gone towards this censorship programme. A small figure perhaps, but the total budget for the team in 2007 (without the £1.3m) was only £3.5million.

So the Australian Government, in the name of protecting children with a scheme that blocks millions of sites, has created a situation where pedophiles get away, even when they are known to exist, because funding that would have been allocated to pursuing them has been spent on Internet censorship.

The total budget for censorship in Australia is £21 million – imagine if that amount had been put into protecting children instead?

Why am I suddenly reminded of Clearance Mitchell and Merry Gerry Clanberry at a Select hearing?

This smacks of another group trying to do more dumbing-down of the internet to me.

“They” won’t rest until the Internet is as dour and grey through moderation as their minds. At which point it will be no better than teletext or Labourlist.

’tis all frightening, isn’t it?

I was completely and totally disgusted by a Select Committee [no gloves off, but rather 4 pairs on] not asking one single real question from someone, who has openly stated numerous times that there was a STRATEGY of using the press … They [the committee] could at least have READ some of these interviews

And had they forgotten that the Portuguese had some “indicia” to make them “arguidos”?
I haven’t seen, but have been told about the morning session: someone being grilled for 3 hours? And then someone being treated like a vulnerable “celebrity”, who needs to be seconded by a spokesman and a libel lawyer …
Try that in any other country [apart from central Africa, the Far East and some Latin Americans]. What’s wrong over at “your” place?

I thought I had read far too much into it all.

Sorry I have missed you. Bon nuit!

Goro ………… Reminiscent of the Cold War years or what!

I have often wondered why the UK has never suck its head above the parapet regarding the Chinese regimes. I guess it must be because the current Government can see a lot of sense in keeping the masses uninformed.

I wonder what propagandist rubbish they will feed us on when they finally try to dumb us down once and for all?

I know where I would like to stick my hard-drive Gordie!

*yawn* keep up would you?

I swear, you web 2.0 folks are about 1 year behind the times, the MS are 2 years adrift.