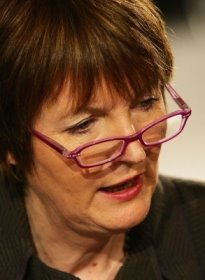 It is difficult to think of a more effective way to ensure that another 3 million properties are built in Andorra, and another 3 million relatively wealthy people move their savings and pensions out of the UK into Andorra, or other tax free havens, than Harriet Harman’s announcement that – notwithstanding the legality of Fred the Shred’s retirement pension contract – it was unacceptable to Gordon Brown, and therefore he would be deprived of it.

If Fred can be deprived of his pension on the whim of the government, then so can anyone else. Little wonder that this government has failed to denounce the Mugabe regime – they obviously can see nothing wrong with it.

A few days ago we were told that Gordon Brown was thinking of sacking Harriet Harman, believing she was plotting to replace him. (Do all Labour Prime Minister ultimately fall victim to Wilsonian paranoia?)

I can think of one very good reason why he won’t bother – she is elected Deputy Leader of the Labour Party…..he can fire her as Leader of the House of Commons, but she will still be right there next to him as Deputy Leader of the Party – unless, unless, he finds that notwithstanding the legality of her election, her presence was unacceptable to Gordon Brown and therefore she would be deprived of her position…….

Relegating the Rule of Law in favour of the Prime Minister’s whim can have a nasty sting in the tail.

Blink says: …………….. There has been major criticism of NewStassi economics
in recent days and Brown courtesy of Robert Peston leaked the details of
Fred

It’s about time the Government realised that economists are the best people
to run the economy!

When can we pretend to live in a Democacy again? I loved the feeling I got
when I was about 12 years old. It was lovely being oblivious to serious Worl
issues. Bliss not knowing that one day we would have Freedom of Information
…………….. By the way – Does anybody know when we will have Freedom of
Information?

Does fat Jacqui Schmidt or Milly Mongoose even know when we will get
this?

“If Fred can be deprived of his pension on the whim of the government, then
so can anyone else.”

Some already have. Remeber Gordon’s raid when NewStassi got into power. The
real issue is NOT Fred’s pension but Brown’s total anhilation of the economy.
There has been major criticism of NewStassi economics in recent days and Brown
courtesy of Robert Peston leaked the details of Fred’s pension as a
distraction…they are all shits but some more than others.

welcome back Anna, hope you had a good time…..

I had a great time thank-you Blink. Did me the world of good to catch up
with the real world and a few sunsets……..

They could just freeze it until he reaches the same retirement age as
everyone else…..65.

This is extremely wrong.

The government can’t go about changing laws to punish non-criminals just
because we all hate them.

It’s alright to take a huge bonus away – but not a pension.

Where will it all end!