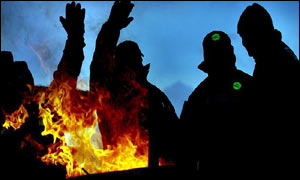 ACAS have just discovered that they live in Europe.

Having finally got round to reading the small print on the contracts at the Lindsey oil refinery, they have grudgingly agreed that TOTAL had not broken employment law by bringing in Italian and Portuguese workers.

They say that the campaign for fair access to jobs for British workers in the construction industry has nothing to do with the exclusion of other EU nationals from work in Britain.

It is in fact about protecting people working in Britain from exploitation regardless of where they come from. It is a class issue not a race issue.

Who was being exploited?, not British workers – their original complaint was that no British workers had been given jobs at Lindsey. It would surely come as a surprise to the workers clustered round their braziers to find that actually ACAS were campaigning for higher wages for those Italian and Portuguese workers and not to have them thrown out of the country so that ‘the lads’ could have their jobs!

Their concern now is that:

The long term effect of this interpretation of the law will be to drive wage levels down across the whole of Europe to the lowest levels of EU accession states.

and the solution is – I quote – “for the EU Commission to over turn the ECJ decisions in favour of a Posted Workers Directive with that protects ambient wage rates”. Quite apart from the mangled English in that sentence, is the more worrying lack of understanding of the hierarchy of power within the European Union.  No decision of the European Court of Justice can be over ruled.

The days when the lads could march on Downing Street for beer and sandwiches with a government which would obligingly adapt the law to suit them have gone.

And about bloody time! UK workers have had it all their own way for years.
And for what? To get the wife a tit-job or buy bigger wide-screen tellies
that’s what! What exactly have the blue-collar workers been doing with their
wealth for the past 35 years?

People in the UK want to work out what side their bread is buttered and put
some effort into manufacturing and output.

And if they don’t like it ……….. they should get into politics! That’s the
only way to get money for old rope these days.

Ask that Setta Jowels woman! Otherwise known as Tessa the Tosser. Her
‘estranged’ husband husband even knows how to do an Italian job!