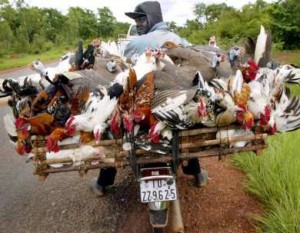 There is much squawking and clucking as fattened chickens noisily return to the safety of their roost. Jostling for space, those on the highest perches are pecking bloody holes in the late comers who thought they had a reserved space.

One of Gordo, the chief Cock-up-erelâs, favourite hatchlings was the Private Finance Initiative (PFI) an oeuvre that possibly made your eyes water with boredom at the time, mine too; we should have paid more attention as this one rolled out into the nesting box.

Labelled âuntouched by Government handsâ, it was described as free range private initiative; instead of government incurring debt to build our Hospitals and Schools, high flying business men would be invited to tender for these projects and finance them with private money. The cost of these vast projects would not appear as a debt on the government balance sheet, the Hospitals would still get built, Knighthoods would be handed round to all and sundry, and the public would duly vote Labour when presented with their shiny new Hospitals â what could go wrong?

Precisely what has gone wrong. Gordo was busy stuffing other chickens at the same time; meddling with the regulation of the banks, encouraging the credit boom, strutting his stuff. The PFI contractors have discovered that there is no private fiance to be had, billions of pounds worth of motorways and schools are to be mothballed â the very same public investment projects that the Cock-up-erel promised left us âbest placedâ to weather the inclement financial storm from Americaâ¦â¦

The Times reported yesterday that:

âThe Chancellor is expected to guarantee bridging finance to enable public sector schemes being built under the Private Finance Initiative (PFI) to go ahead if they are already in the pipeline.â

âGuarantee bridging financeâ is another of those weasel phrases like quantitative easingâ that you are not supposed to inspect too closely.  In plain English it means that around Â£2.4billion has just been added to the Â£4 trillion or so that the Tax payer owes.

Can ye no take a yolk? This one is on you.

I saw a police car parked in a disabled bay and wrote to my local council â
they put me in touch with the local police sergeant â he wanted all the
evidence, times etc and swore that none of his officers would ever do that â
despite my contact with him, he still denied anything ever happened â next
time I

Quite right, Blink. Theyâve got cameras trained on everyone all the time,
average speed cameras, GATSOs, CCTV etc. I donât doubt that video footage
existed somewhere to back up your complaint, but â¦ itâs for âtheirâ monitoring
of us, not âourâ monitoring of them, so you wouldnât ever get to see it would
you? Shame on them.

I saw a police car parked in a disabled bay and wrote to my local council â
they put me in touch with the local police sergeant â he wanted all the
evidence, times etc and swore that none of his officers would ever do that â
despite my contact with him, he still denied anything ever happened â next
time Iâll have my camera too â bastards

Try not to get into a flap.

Sorry for my oeufish behaviour, I have to fly the coop now. So must run,
before it comes down to the wire.

Show some pluck, Saul and donât worry if it seems youâre clutching at
straws; letting yourself crack a few cheep yolks late in the day is better
than brooding that all the freshest eggsamples have already been whisked away
earlier. I donât know whattle do now, either. Itâs a tricky oeuvre, after all.
Oeuvre to you.

Clucking Hell! No eggspletives allowed. I shell not tell you again.

Itâs so eggsasperating having to lay down the law.

BTW â we went dressed as Bantam and Robin â¦.

Where did you poach that idea from?

I have an oeuful hangover and I shell just have to see whether my brains
remain scrambled. (reaches for miracle-cure Marmiteâ¦)

Groan â¦ I just pop in to chick out what Iâve missed and find that youâre
all laying into me. Canât you see Iâm still feeling a little beaky and
feather-brained after my egghausting weekend of jollity? Iâm scratching around
for some apposite ripostes but Iâm foxed; Iâll try to come up with something
hentertaining later. Till then, ovum and out.

We were worried that you might have been eggsploded!
Glad to see you
back, Iâm sure youâll crack a yolk or two when the hang over
subsidesâ¦â¦â¦.

I think we need a back bench revolt this week!

Saul! Hi! Where is Ms Smudd? Whenever you donât appear I think that Gordie
has eaten you or locked you in a darkened room somewhere without a guardian to
stop you from harming yourselves. Love Coco X

We simply have to get rid of this Government.

We have lost our liberty and privacy. It will not be regained. Let us seek
to depose the Government forthwith.

I am very scared.

My favourite hobby has been to film police officers who cannot drive
properly around roundabouts or who park in places that cause hazards for
others.

I always have my camera at the ready in case I see the police wading in and
assaulting members of the public â¦â¦â¦â¦â¦â¦. I believe that this is going to be an
imprisonable offence.!!!

Having just found out that ACPO has been set up as a private company and
that it makes millions of pounds â¦â¦â¦â¦â¦â¦. it is safe to say that we now live in
a Police State.

If people like Ian Blair can get a job in the Police and rise to dizzy
heights â¦â¦â¦â¦ what could a copper with brain rise to?

Ms Raccoon. I demand to know what you have done with our resident Fat
Lass?

There are no circumstances other than physical restraint, that would
prevent her from posting here. The opportunities for her particular brand of
comments are countless. Has she been silenced? We should be told.

Masser Saul, She went to a fancy dress party on Friday night, with â gulp
â another man. I havenât heard from her since, and the trouble is I donât
know what she went dressed as â the Wider Agenda, the National Debt, Big
Ben, Jacquie Smithâs left nostril; I mean she could have been blown up by
the terrorist squad, anything could have happenedâ¦â¦..or she might just have
a corker of a hang over!

This government will just soldier on in the hope that the eleggtorate have
short memories come eleggtion time.

Unfortunately all the eggs are in one basket, a precarious situation
indeed.

Make way for an authoritarian, neofascist government of the kind we have
never seen. The gap between the political elites, the media and celebritties
is such that there will be no way back. The rest of the population will become
the fodder by which these elites remain in power. The police and state
security are being given the licence to run amok in an effort to maintain this
structure. No one in the UK cares enough anymore to fight the system so the
sytem will win and be strengthened by such measures. Most people would be
better off dead than suffer the unrelenting drive to maintain power. The
Tories may have an opinion poll lead but it canât be trusted to make any
signficant difference if they get in power. Itâs about getting labour out. Not
a very good way to craete change. We are truly doomed.

I came to live in France for my husbandâs sake, not because I was running
away from England, but now I feel I didnât run far enough.

The complacency of the âGolden Ballsâ generation is truly
frightening!

PFI â the great loaded shotgun pointing at the heart of Government finance.
Brownâs big idea. If the Tories canât make this one stick they need shooting
themselves.

Good to see you Jack,

Cameron should go straight to parliament and call in all the mandarins and
demand the truth and demand some explanations.

Then Cameron should give it to us straight from the shoulder from
parliament, not No10â²s steps.

The full extent of the bad news should be made public as soon as possible.
The truth is essential as the public are going to face some significant pain.
Browns stock is down now because he raised false hopes about being able to
mitigate the crisis.